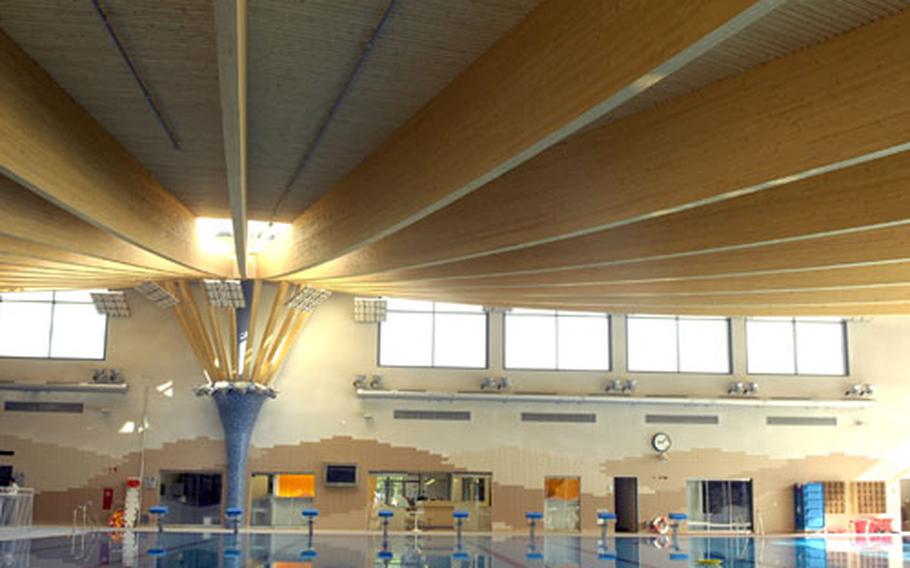 RAMSTEIN AIR BASE, Germany - When this base&#39;s new aquatic center opens in September, it will become the U.S. military&#39;s premier indoor pool in Europe.

The center will include three types of pools, a water slide, children&#39;s wading pool and a caf&#233;-style snack bar with plastic stools made to resemble water droplets. The center will be able to accommodate as many as 450 people and offer everything from basic swim classes to canoeing lessons.

"People are so excited," said Carol Cox, base Outdoor Recreation director. "This is a long-awaited facility."

Although the pool is completed, there aren&#39;t enough lifeguards to staff it, Cox said. People are being trained to fill those positions.

While the people who live and work on base look forward to the Sept. 4 opening, local German officials do not. They fear the center will cut into business at the area&#39;s own swimming pool, which happens to be a short walk from the base&#39;s main gate.

The base pool is opening a year later than planned, but managers of the local pool and German officials wish it would never open. They lament that the aquatic center, along with the eventual opening of a 350-room hotel and base mall, will keep Americans from going off base, sinking the incomes of area businesses already hurting from a weak dollar.

The Ramstein-Miesenbach area-owned Azur Water World swimming pool is struggling financially. The facility, which first opened in 1991, is running at a 900,000-euro deficit, and pool officials fear that figure will only rise. About 40 percent of their customers are American, many of them families who frequent the center for swim lessons or doing laps.

"If they all stay on base, we will have a big problem," said Gundula Muller, manager of Azur.

Paul Junker, deputy mayor for the Ramstein-Miesenbach Union Community, said even a small drop in the number of customers could put the swimming center in a difficult financial situation. He doubts the center would close but the lack of revenue might cut into future projects throughout the area.

While both Germans and U.S. military officials often boast about their good relationship, the issue over the swimming pool &#8212; along with the new mall &#8212; has remained a point of frustration by German officials.

"We are concerned, of course," Junker said. "The owners of the restaurants and the other shops fear less Americans will be their customers ... We are concerned, but we will always have good contacts with the Americans and their families. I think we&#39;ll be OK."

The U.S. military remains one of the area&#129;fs biggest employers and economic drivers. The military employs about 6,000 German workers and estimates that it has an economic impact to the area of about $1.69 billion.

But when American commanders first told local politicians more than three years ago about the idea of a base pool, German officials tried to talk them out of it, Junker said. Community leaders proposed building a pool on the site of the Azur to be used for U.S. military and NATO personnel. As part of the deal, the U.S. would provide the bulk of the funding, while the Azur would lower the rates for Americans wanting to use the other facilities. The expansion would include additional security.

But military officials did not take them up on the offer.

Despite the concerns by local officials, Cox said the two aquatic centers can coexist.

"This is not designed to be an opponent to the (off-base) pool," she said. "I think there is plenty of room in this area for two facilities."

Open Sept. 4.Feature a 20,000 square feet pool area, including a play pool with slide, competition pool and kiddie pool.Include a snack bar and an outdoor area for large groups.Feature locker rooms with individual shower stalls and hairdryers.Employ about 40 lifeguards.Have a capacity of 450 people.Source: Ramstein Outdoor Recreation