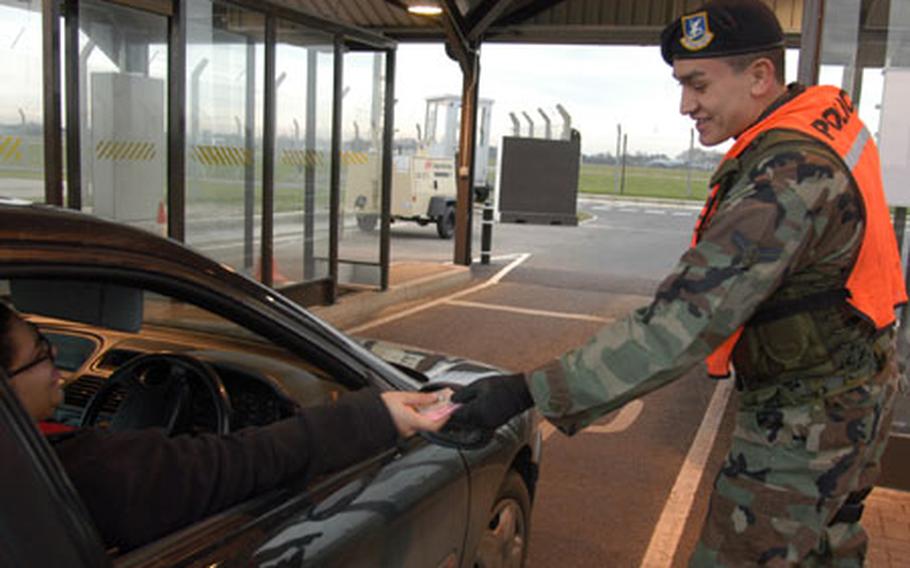 Airman 1st Class Abraham Cuevas from the 100th Security Forces Squadron checks a woman&#39;s identification and base pass at the main gate at RAF Mildenhall Friday, the first day of access around the east end of the base runway. (Ben Murray / S&S)

RAF MILDENHALL, England &#8212; An access road from the main gate at RAF Mildenhall to the south side of the base opened Friday, cutting the travel distance from the gate to some facilities by 1.3 miles.

Base officials opened the south perimeter road around the east end of the runway to inbound traffic, allowing a left-hand turn at the entry gate that brings commuters to facilities such as maintenance hangars and the new, southside gym.

The road had previously been available only to official traffic, due to a &#8220;flight security issue,&#8221; with allowing civilian vehicles on the road, which runs directly under flights landing at the base, Lapham said

But after months of construction to reconfigure the main entry area at Mildenhall, including the addition of new pass and identification offices and a four-lane entry area protected by a canopy, that issue has been resolved, he said, though the access does come with restrictions.

No commercial vehicles will be allowed around the east end of the runway, and traffic will only flow one way from the gate to the southside of the base, he said.

Additionally, cars will have to be in the left two lanes of the ID checking area at the gate to turn left, he said.

The runway at RAF Mildenhall essentially bisects the base into two halves, with the main gate now situated near the east end of the airstrip. To get to the south side from the main gate, however, drivers previously had to go all the way around the west end of the runway, a distance of 3.8 miles.

In other gate work at the base, improvements to the Shippea Hill exit gate are about 30 percent complete, Lapham said. Improvements there are part of a larger plan to make that gate a left-turn-only exit &#8212; preventing cars from turning into a highly-trafficked crosswalk &#8212; with the gate next to the Bird in Hand pub to be used as the right-turning exit, he said.

In addition, construction at the roundabout adjacent to the back gate of RAF Lakenheath is scheduled for Feb. 26 and 27. The roundabout will remain open, though traffic congestion is expected.

Base officials have also announced that Bangor Road in the residential area of RAF Lakenheath will be closed Feb. 26 in preparation for the construction of a new access route and perimeter fence.