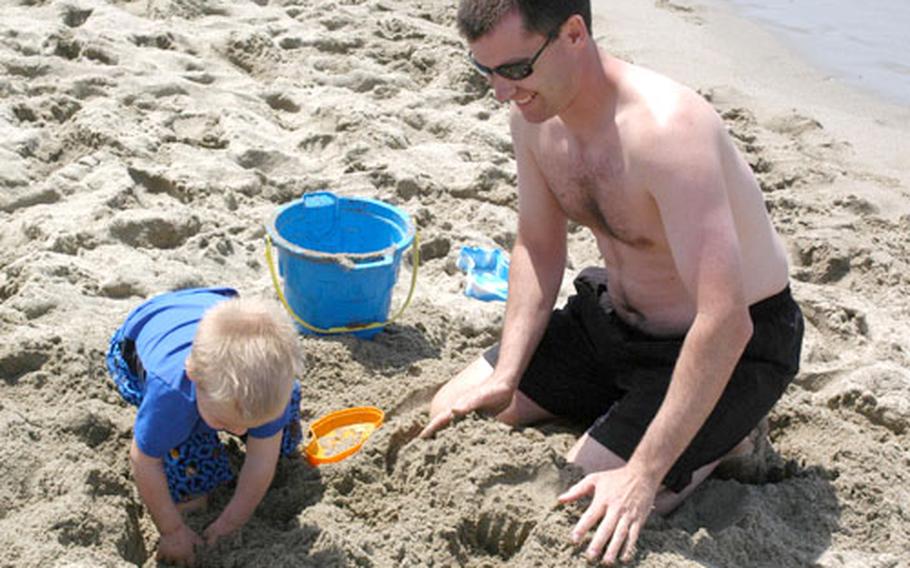 Air Force Capt. Jack Blalock gets some help from his son, Joshua, while building a sand structure Friday during the season debut of the American Beach in Tirrenia, Italy. (Kent Harris / S&S)

TIRRENIA, Italy &#8212; Stay away from the mirror, squeeze into that suit and splash on the lotion.

The calendar might say that summer&#8217;s still several weeks away. But when Memorial Day weekend comes around every year, it means it&#8217;s time for the American Beach near Camp Darby to open. And that effectively means that summer&#8217;s here.

Camp Darby is one of the smallest military facilities in Europe in terms of population, but thanks to the beach and campground, the number of Americans swells in the summer.

They include people like Lt. Cmdr. David McBeth, who drove to Darby with his family from Naples. &#8220;We come here just for a change of pace,&#8221; he said.

If history is any indication, hundreds of others will opt for the same plan during the summer months. Darby traditionally hosts not only Americans stationed in other parts of Italy, but those based in Germany and the United Kingdom as well.

&#8220;For the first time, all of our umbrellas were sold out,&#8221; he said. That means about 180 of the 226 umbrellas currently set up on the beach will be off-limits to those who didn&#8217;t reserve for the season. But Beezley said the others are set aside for daily use, and more will likely be set up.

The umbrellas and the accompanying chairs are new. Bright orange, with metallic support instead of wood, they&#8217;re designed to last longer, Beezley said.

Longer than Ronald Peterson, for instance, has been alive.

His mom, Tamara, was busily chasing the 2&#189;-year-old around the beach. Or at least watching him run around.

She wasn&#8217;t counting on the new umbrella colors.

Beezley said not much else has changed. There&#8217;s still a large area for barbecuing, dozens of small changing rooms, and a pair of volleyball courts. One concession stand sells hot dogs, hamburgers, salads and chicken sandwiches. Another offers assorted drinks.

Admission to the beach is $2 or 2 euros. It&#8217;s reserved for American ID card holders, the Italian workforce at Darby and some allied servicemembers stationed in Europe. It&#8217;ll be open daily from 10 a.m. to 7 p.m. through Labor Day weekend.

Leon Lucas, a civilian employee at Darby, his wife, Editha, and their three children were present for opening day. They expect to be there frequently through the summer.

Air Force Capt. Jack Blalock held his youngest child, 5-month-old Matteo, in his arms at the edge of the water, while middle son Joshua splashed nearby. His wife and eldest son were out in a rented paddle boat.

He said he thought it was a great place for his family to hang out while he was working.