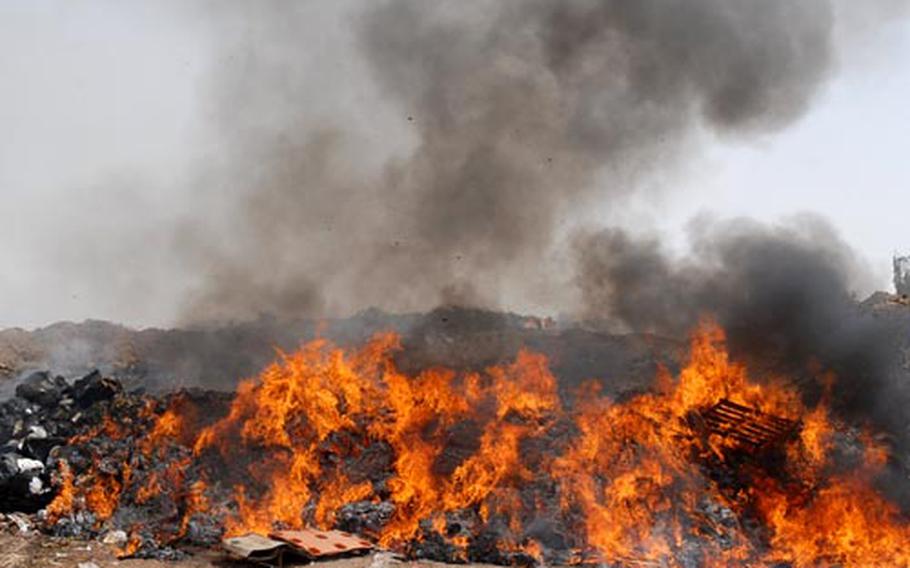 Buy Photo
The burn pit at Balad Air Base, Iraq, was in full operation in early 2008. Though the military has purchased incinerators to mitigate any health risks from open trash burning, few have been installed. (Stars and Stripes)

Buy Photo
The burn pit at Balad Air Base, Iraq, was in full operation in early 2008. Though the military has purchased incinerators to mitigate any health risks from open trash burning, few have been installed. (Stars and Stripes) The burn pit at a combat outpost in Baghdad earlier this year shows the amount and types of trash being openly burned at even the smallest U.S. bases in Iraq. (Michael Gisick / S&S)

Despite serious health concerns over the widespread open-air burning of trash at U.S. bases in Iraq, only 17 of 41 incinerators the military purchased four years ago to combat the problem are in operation.

And while plumes of smoke continue to rise over even the military&#8217;s most settled facilities, contractual issues have slowed the installation of the incinerators, which release lower levels of pollutants into the air.

While the military says it is trying to get more of the incinerators working, after several weeks, officials at the Defense Contract Management Agency could not answer specific questions about the contracting problems.

According to U.S. Central Command officials, 17 additional incinerators are now under construction in Iraq. But at least seven of the units are still sitting unassembled as they await funding. The incinerators, officials said, burn trash at a far higher temperature than open pits and are considered safer to people&#8217;s health.

A pair of government documents obtained by Stars and Stripes paint the problem in two very different lights. One document, a December 2006 memo by an Air Force environmental engineer at Balad Air Base, called the situation "an acute health hazard."

But a study by the U.S. Army Center for Health Promotion and Preventive Medicine and the U.S. Air Force Institute for Operational Health completed earlier this year found that after four months of air sampling in late 2007, the risks to servicemembers&#8217; health were not above the norm.

Some U.S. officers who have been assigned to Iraq, meanwhile, have expressed frustration over the slow pace at which the incinerators have been brought on line.

The "fix should not be years, but more in the order of months," Air Force Reserve Lt. Col. Darrin Curtis, an environmental engineer, wrote in a December 2006 memo while stationed at Balad.

"In my professional opinion, there is an acute health hazard for individuals," Curtis wrote. "Burn pits may have been an acceptable practice in the past, however, today&#8217;s solid waste contain materials that were not present in the past."

In the memo, signed by Curtis and Lt. Col. James Elliott, then the chief of aeromedical services at Balad, it was noted that documentation noting exposure was being placed in the permanent medical records of servicemembers stationed at the base.

In an interview with Stripes earlier this year, Curtis said, "I was prompted to write the memo because of the work stoppage of the base&#8217;s incinerators. Incinerators were being installed, but were put on hold because of money issues. I believed the open pit burning was a health hazard and wanted to do all I could to help rid the base of this."

Of particular concern are the large volume of plastic water bottles that make their way to the burn pit, as well as metals and chemically-treated wood products. Though the military says trash taken to the Balad pit is sorted before it is burned, visits to the pit earlier this year revealed closed trash bags being thrown in the pit and partly burned metal drums and aerosol cans among the rubble.

In 2004, the military issued a press release highlighting a crew that used bulldozers to move and burn garbage at the burn pit. The release mentioned that propane tanks were being burned, and sometimes exploded as they were heated.

The study of the Balad burn pit by the Army and Air Force released in May, however, reached a far milder conclusion about possible health effects than Curtis&#8217; 2006 memo. Based on nearly four months of air samples taken in early 2007, the study found that "exposure levels from burn pit operations are not routinely above" deployment health guidelines and concluded that "adverse health risks are unlikely."

Of the 163 air samples taken, 52 included levels in excess of the Military Exposure Guidelines, or MEGs. However, all but two were for small particulates &#8212; essentially dust &#8212; which the study says is in line with levels across the Middle East and likely isn&#8217;t a result of the burn pit.

"There is a significant uncertainty about actual exposure levels and the associated health risk estimates," an executive summary of the study states, though it adds that an effort was made to measure air quality under "worst-case" conditions.

Dr. Alfred Franzblau, a professor of occupational and environmental medicine at the University of Michigan School of Public Health, reviewed the study for Stars and Stripes.

"I can nitpick details about study design, but overall, I was stunned by the amount of air studies done in a war zone &#8211; I was amazed," he said. "The bottom line is the burn pit is disgusting, it looks bad, probably smells bad &#8211; but in terms of likely health effects, it appears to be unlikely that anything&#8217;s going to happen."

While the study says long-term adverse health effects from the burn pit are "unlikely," there is also evidence from other studies that significant numbers of U.S. troops are returning from Iraq with lung diseases, allergies and other problems.

A study released in May by researchers at Vanderbilt University found that 29 of 56 Fort Campbell, Ky.-based soldiers surveyed were diagnosed with bronchiolitis, an infectious disease of the lower respiratory tract, after returning from Iraq in 2003. The military said many of those soldiers were exposed to a sulfur fire near Mosul, but researchers found that others had no clear exposure history.

Meanwhile, a study of more than 6,000 Iraq war veterans by researchers at a Department of Veterans Affairs medical center in New York found that about 10 percent of returning troops suffered from nasal allergies, a rate roughly twice that of troops stationed in the United States.

Thirteen percent of U.S. Army medical visits in Iraq are now for new allergies, asthma and other respiratory problems, according to that study, which was released in March.

The military would like to phase out burn pits in favor of incinerators, officials say.

"The installation&#8217;s burn pit, which has been in its current location since before Coalition forces assumed command of the base, has been a concern for deployed service members here," CENTCOM officials said in response to questions from Stripes. "Both U.S. Air Force and Army commanders have been working to improve the situation since 2004."

Stars and Stripes editor Helen Hu contributed to this report.