Op For prepares for Afghanistan deployment 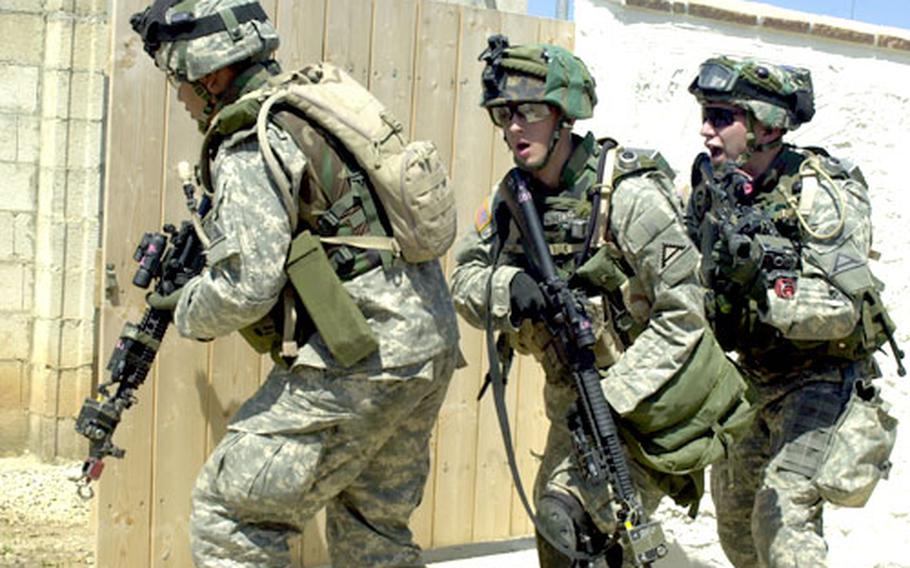 HOHENFELS, Germany &#8212; The Op For is headed downrange.

The overseas missions allow 1-4 to contribute to the war on terrorism and also keep its soldiers up to date on the latest downrange tactics, giving them knowledge they can use to train others, said Delass, 41, of Rochester, N.Y.

Company C, which learned of the mission in November, will support the Romanian army&#8217;s 2nd Infantry Battalion &#8212; the Calugareni &#8212; in Afghanistan, Delass said.

&#8220;It is a great opportunity to train and fight with a multinational force. We have been working with the Romanians since March. This will be the second time we have fought with a Romanian battalion,&#8221; Delass said. The unit&#8217;s Team Dragon, Company D, served in Afghanistan with a Romanian unit for several months last year, he said.

&#8220;We have been partners in training and also in mission area, so I can say that my battalion has a great experience of working with Americans,&#8221; he said.

Company C soldiers traveled to Romania for a training exercise earlier this year, he said.

Petrescu said his country, which recently signed an agreement to host a semipermanent U.S. base, would join the European Union in 2007. He said there were many beautiful areas in Romania, including the Carpathian Mountains with the famous Prahova Valley ski area as well as the Black Sea beaches.

After surrounding the town with gun trucks, a team of Company C troops raided a house to secure a pair of medium-value targets. After a brief gunbattle with insurgents in the house, the team found intelligence indicating a weapons cache and more insurgents were holed up in a cave complex nearby. That was also raided and another shoot-out ensued, complete with improvised bombs that sent smoke billowing from the concrete tunnels comprising the cave complex.

Company C commander Capt. Kevin Poole, 30, of Chesterfield, Va., said many soldiers in his unit had already deployed as part of the war on terrorism and about one in five had served in Afghanistan already, he said.

The soldiers who have served in Afghanistan told their comrades that they could expect to do a lot of walking downrange, Poole added.

&#8220;They are saying there is no ability for mounted movement. They are pretty austere conditions. You have to leg it. We have been doing a lot of walking for the last three months, doing road marches everywhere we go and trying to condition ourselves for the high altitude and the heat in summer,&#8221; he said.