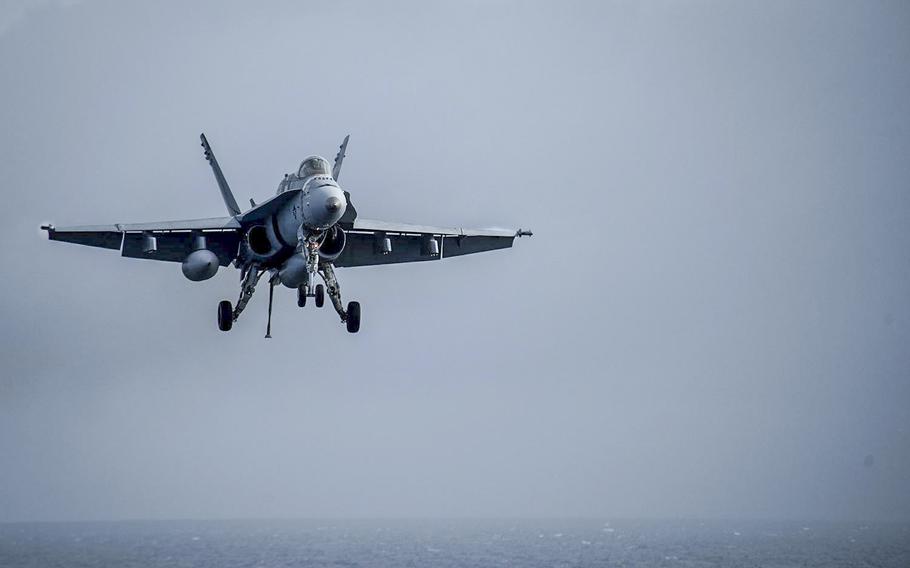 An F/A-18C Hornet, assigned to the Checkerboards of Marine Strike Fighter Squadron 312, makes its approach for landing on the flight deck of the aircraft carrier USS Theodore Roosevelt on Jan. 19, 2017. The Theodore Roosevelt is off the coast of California conducting carrier qualifications. (Bill M. Sanders/U.S. Navy )

Only 72 “could take off today, this morning, right now,” said Lt. Gen. Jon Davis, deputy commandant for Marine Corps aviation. Of the rest, 109 are in longer-term, scheduled depot work and 99 are temporarily offline for less complex maintenance, or because they are awaiting a spare part, he said.

Davis said the lack of spare parts continues to be the biggest challenge the Marines face in having more Hornets ready to fly.

Of the 72 available aircraft, 56 Hornets are committed to active-duty squadrons and the remainder are with training or reserve units, Davis said.

The 56 active-duty aircraft are about 20 short of what Davis said those units need for squadron pilots to stay fully trained.

“We’ve got a lot less inventory and a lot less units,” he said. “I’ve never seen the Marine Corps as operationally deployed and out there as we are in a sustained fashion ... probably since Desert Storm.”

Constant wartime missions have pushed Hornets to the end of their planned service faster than expected. An investigation by Stars and Stripes in September found decreased funding and fewer aircraft have led to a lack of training flight hours, which contributed to a spike in Hornet crashes in 2016.

The Marines will request additional funds to buy parts and restore more of the Hornets, Davis said.

“Our need to recapitalize airplanes is large – certainly on the F-18 side,” he said.