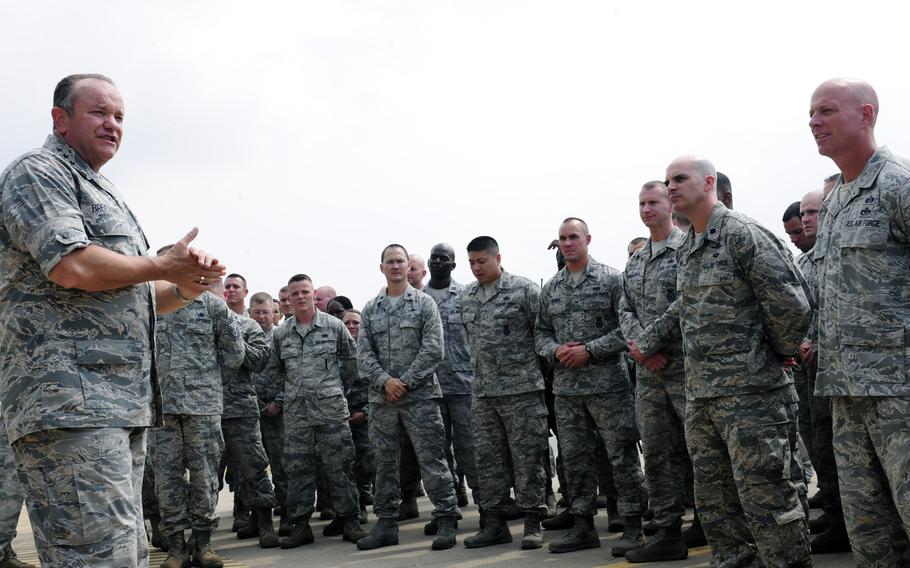 STUTTGART, Germany — Describing the crisis in Ukraine as an “era-defining” event, NATO supreme commander Gen. Philip Breedlove said the alliance must seek answers to a host of thorny questions as NATO transforms in the face of new, unconventional threats.

“Russia’s actions challenge the fundamental assumptions and principles which Europe’s post-Cold War development was founded,” Breedlove said during an online security forum. “These actions appear to illustrate a desire to set the rules not only in Ukraine, but potentially in other bordering countries — a direct threat to the international order upon which global stability depends.”

During the three-day “Security Jam,” military officials and defense experts debated key problems ranging from the war in Syria and the Islamic State militant group, to the implications of Russian action around Ukraine.

The forum, an annual brain-storming session that aims to take on a complex range of threats, kicked off Tuesday. It was organized by a collection of global think tanks as well as U.S. European Command.

For Breedlove, who participated in an exchange Tuesday that focused on NATO’s role in 2025, the crisis in Ukraine serves as an example of the types of problems the international community could expect to see more of in the years ahead.

“(C)oncerning hybrid warfare we find a need to adjust our cultural mind-set, in that we have to prepare well left of incidents, provocations by Russia,” Breedlove stated. “And this will be our task in the coming years.”

In particular, the West must prepare to contend with Russia’s use of so-called “hybrid warfare” tactics, a complex mix of unconventional measures short of a mass, formal invasion, but that still can cause unrest, Breedlove said. In Ukraine, U.S. and NATO officials have accused Russia of arming and backing pro-Russia separatists to create instability and open the door to Moscow’s annexation of Crimea.

Events in Ukraine have prompted NATO to beef up its presence in the region, with a new “spearhead” response force taking shape and a series of “staging bases” planned for eastern Europe.

NATO, which was formed in the aftermath of World War II to deal with conventional threats to Western Europe posed by the massive Soviet army, must now prepare to counter the novel tactics unveiled in Ukraine as well nonconventional threats along the alliance’s southern border. Within NATO, concerns continue to grow over the danger posed by the Islamic State group, which counts in its ranks hundreds of European and American fundamentalists.

The crisis in Ukraine, meanwhile, “is an era-defining event, requiring answers to elusive and ill-defined questions,” Breedlove said.

Among the questions asked by Breedlove:

How to deter future aggression while simultaneously assuring member states? What are the consequences for European security if “Russia’s rules” are applied elsewhere? How does the NATO alliance adapt to deal with conflict between partner nations? While no immediate or easy answers emerged from Tuesday’s discussions, Breedlove said such forums are a step toward finding solutions.

“Future strategies must have defined end states that are politically, economically and socially cohesive,” Breedlove said, adding this was necessary to confront “an array of uncharted challenges we must work together on.”