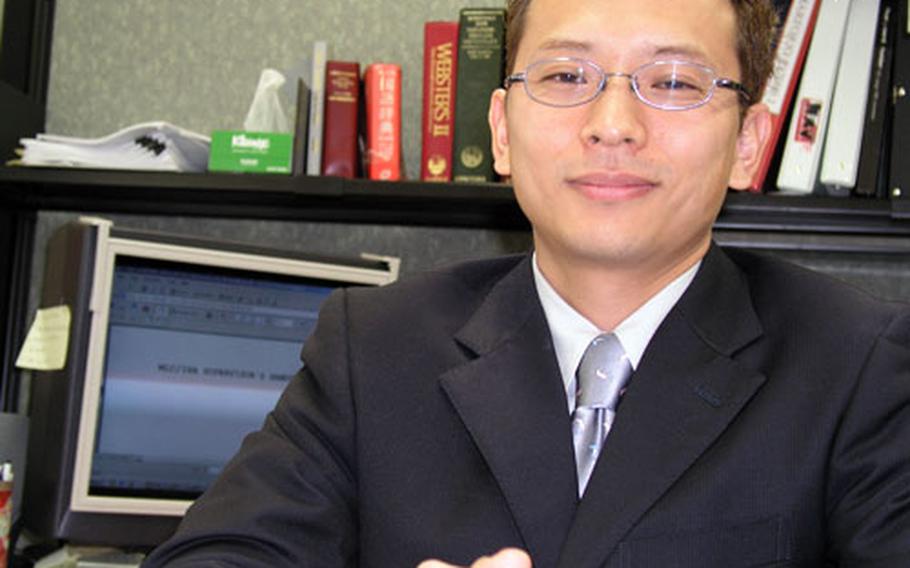 Kazato Adachi is the architect of an online handbook for supervisors of MLC and IHA employees on Marine Corps bases on Okinawa. The newly released instruction book is designed to help U.S. managers understand the unique employment system under the status of forces agreements between the U.S. and Japanese governments. (Chiyomi Sumida / S&S)

It is designed to help U.S. supervisors understand the system under which Japanese workers on U.S. military bases are employed and managed, said Kazato Adachi, chief of the Japanese National Labor Section of the human resources office on Camp Foster.

&#8220;It is easily accessible for all supervisors,&#8221; he said. Before the electronic version was published, he said, supervisors routinely queried his office concerning management of Japanese employees.

A benefit of the online handbook is that it can be updated promptly whenever there are changes, he said. The new online version replaces an old hard-copy manual issued in 1997. &#8220;Look at all these binders,&#8221; he said, pointing at a stack of thick black manuals lining the overhead shelf in his office. &#8220;The new handbook is concise, with only some 30 pages. And it is easy to follow.&#8221;

Japanese workers on U.S. military bases in Japan are hired under bilateral labor contracts, the Master Labor Contract (MLC) and the Indirect Hire Agreement (IHA). The guidebook explains the employment, salaries, welfare and benefits of all employees under the system.

MLC positions are open to permanent residents of Japan who are not U.S. civilian employees for the military, servicemembers or their family members.

IHA positions are available for permanent residents of Japan who are not U.S. citizens.

The unique nature of the labor agreements at times has caused friction between Japanese employees and U.S. supervisors. In May, for instance, two Japanese female employees of the AAFES Exchange on Kadena Air Base filed complaints through a labor union to the Defense Facilities Administration Bureau in Naha, a Japanese government agency and the legal employer of MLC/IHA. The women, one pregnant, said that they became ill after their supervisors refused their requests to go home early.

The case remains under investigation by the agency, said Yuichi Oba, chief secretary of the labor union, Zenchuro&#8217;s Zukeran branch.

&#8220;Since the two cases, however, there are no new complaints filed,&#8221; he said, noting that more frequent meetings are being held between the management and employees at the exchange store. Oba attributed many manager/employee problems to some managers being unaware of the special bilateral contracts. &#8220;Especially for new managers, we want them to study the employment system, which is quite different from that of the civilian community back in the United States,&#8221; he said.

The new handbook provides information on types of employment, employee and labor relations such as hours of work, leave, discipline, grievances and incentive awards programs.

The handbook also provides contacts for supervisors with questions, Adachi said. He said his office announced the new manual&#8217;s publication to all organization chiefs via e-mail. However, he said, access is only internal, to supervisors of the Marine Corps bases.

&#8220;We also provide periodic briefings to all supervisors on MLC and IHA systems,&#8221; he said.

As of Sept. 30, about 8,900 MLC and IHA employees work on 23 military facilities on Okinawa, including about 3,000 for Marine Corps bases, according to the Labor Management Office, the Japanese government&#8217;s labor administration office for MLC and IHA workers for U.S. Forces Japan.

The online handbook is available for eligible supervisors at: https://ww1.mcbbutler.usmc.mil/chro/documents/mlc-iha%20handbook.pdf

For Air Force supervisors, a similar guidebook can be viewed at: https://www.kadena.af.mil/18wg/WingStaff/18wghq/index.html