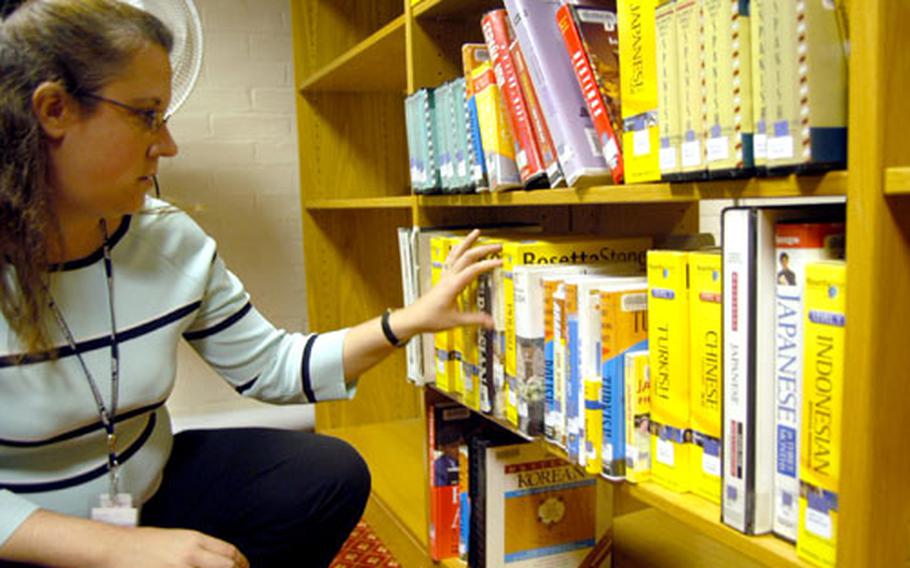 RAF Mildenhall librarian Michelle DeLeo searches for a Rosetta Stone language program at the base library recently. The facility has a number of the programs on hand, and they now also are offered for free online through USAFE libraries. (Ben Murray / S&S)

Air Force community members across Europe have rushed to sign up for a new online program aimed at boosting foreign language skills.

Since the first of September more than 700 people have signed up for free enrollment in the Rosetta Stone language courses offered by U.S. Air Forces in Europe libraries. Students can select any of 28 languages including Farsi, French and Russian.

Available slots filled up in less than a month after USAFE made the program available, creating a waiting list of more than 60 people and a two- to three-week wait time for new enrollees, according to Melinda Mosley, USAFE command librarian.

The new program comes during a time of increased effort by the military to underscore the benefits of foreign language proficiency. On Monday, Air Force Chief of Staff Gen. Michael Moseley issued a mandate requiring all enlisted personnel and some officers to participate in a survey to gauge the foreign language capabilities of the force.

&#8220;The Air Force is putting an emphasis on developing culturally and linguistically,&#8221; Mosley said.

The Army this fall renewed a $4.2 million contract to provide online Rosetta Stone courses to all soldiers, National Guardsmen, reservists and Army civilians worldwide, according to the manufacturer&#8217;s Web site.

The online course is designed as an &#8220;immersion&#8221; program combining audio and visual elements rather than book-based methods to help teach language, a method meant to replicate the way people learn language as babies.

&#8220;They try to teach you like you would have learned when you were an infant,&#8221; said Lt. Col. John Arias, a Rosetta Stone enrollee who works with a NATO air command component in Izmir, Turkey.

The program shows images to the student and repeats words in the chosen language &#8212; Turkish for Arias &#8212; leaving it up to the participant to figure out things without the aid of English translations, he said.

&#8220;I will say that sometimes it is a little frustrating, because you can&#8217;t figure it out,&#8221; Arias said, adding that supplementing the online program with traditional book learning is probably a more comprehensive way to learn.

Arias said he likes the program overall, especially being able to hear the pronunciation of Turkish words, but that he and others have had problems getting it to work on home computers.

In Germany, Jim Willis of the Army Learning Center on Warner Barracks in Bamberg said his facility had seen few technical problems, and that he wasn&#8217;t aware of a waiting list for soldiers.

&#8220;The only initial issue is that the program actually had to be installed on the computers,&#8221; Willis said, adding that every time he&#8217;s helped someone use the program it&#8217;s been successful.

In the USAFE program, the five languages with the highest enrollment are German, Spanish, Italian, French and Arabic, according to Mosley&#8217;s office.

Normally, one of the language courses would cost an individual around $200 to purchase, according to a salesman for the company. To offer it for free, USAFE bought 400 licenses for its libraries and made them available to essentially everyone authorized to use a USAFE library.

To make sure people who signed up but then abandoned the course don&#8217;t take up coveted spots, USAFE requires users to log in and participate at least once every four weeks, Mosley said. A number of people have dropped out and been replaced, she said, which is why the number of enrollees is higher than the actual licenses available.

USAFE has a two-year contract for the licenses, a time line that could run short for students who sign up late, since programs can take two years to complete. Mosley said if the program remains popular, however, she is confident it would receive future funding.