One year after return from Iraq, 173rd Airborne will head to Afghanistan 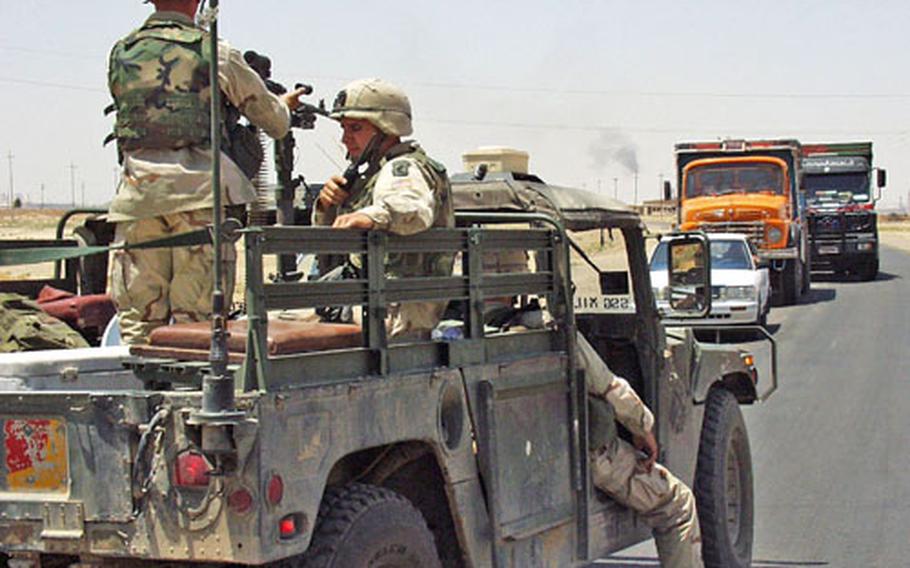 July, 2003: Soldiers with the 173rd Airborne Brigade’s Combat Support Company block a road on the outskirts of Kirkuk, Iraq, while experts blow up unexploded ordnance found in the area. (Kent Harris / S&S)

VICENZA, Italy &#8212; It could be easy to get the impression that members of the 173rd Airborne Brigade aren&#8217;t fond of their home base.

After all, they always seem to be on the go.

After returning from almost a year in Iraq, Owens said, soldiers will have a year back on Caserma Ederle before heading off again to southwest Asia.

Current plans call for the brigade to start deploying in late February or early March. Many of them returned from Iraq during the same time frame this year.

Not that Rogers, or four other soldiers interviewed Monday, are complaining.

Pfc. Anthony Orr certainly wouldn&#8217;t mind more time with his wife, Bridget, or his infant daughter, Halee. She was born just a few months before he deployed to Iraq. The couple had been married only a short time before the deployment.

For his part, Charles Wooten, a staff sergeant with the 501st Forward Support Company, looks on the upcoming deployment as a test of his leadership. He said his unit has a lot of new soldiers who joined the brigade after the Iraq deployment. Wooten sums up the Iraq deployment as &#8220;challenging. I learned a lot from Iraq.&#8221;

Owens said the brigade will be counting on such experience.

Owens knows a bit about Afghanistan. He served on the Southern European Task Force (Airborne) command staff while the brigade was in Iraq. But before going to Italy, he spent four months in 2002 leading the 2nd Ranger Battalion in Afghanistan.

He said although the brigade hasn&#8217;t been to Afghanistan, &#8220;there are a lot of leaders in the brigade that have experience in Afghanistan as well.&#8221;

The new members of each battalion &#8212; estimated at one-third of the entire force during Owens&#8217; assumption of command June 25 &#8212; will have a chance to integrate with the old guard very soon.

Owens said each battalion would spend a little more than two weeks training in Hohenfels, Germany, starting at the end of the month. The entire brigade will then travel north and train for about six weeks beginning in late September.

He said soldiers would see similarities between their tours in Iraq and Afghanistan. But they&#8217;ll see a lot of differences, as well. Iraqis are among the most educated people in the region and &#8212; despite massive problems with infrastructure &#8212; live in a country that&#8217;s decades or centuries ahead of their Afghani counterparts in many respects.

He said Afghanistan might be relatively safer these days for U.S. soldiers, but it&#8217;s not exactly a vacation spot.

Spc. Charles DeWitt from the 2-503rd smiles when asked about the possibility of hunting for Osama bid Laden. He recalls a lot of similar missions in Iraq looking for high-profile targets, many of which didn&#8217;t turn up anything.

Sgt. 1st Class James Litchford, with the 1-508th, said he decided to stay longer with the 173rd, knowing that it would likely be deploying again soon.

A history that will soon include another long deployment far from home.

Familiar leadership for this deployment

There won&#8217;t be much of a transition for the 173rd Airborne Brigade when it comes to working with its higher headquarters during its upcoming deployment.

The 173rd, assigned to the 4th Infantry Division during its previous deployment to Iraq, will fall under the leadership of the Southern European Task Force (Airborne) in Afghanistan this time. The 173rd is normally part of SETAF, with both headquartered in Vicenza.

While SETAF, commanded by Brig. Gen. Jason Kamiya, and the 173rd always share a close working relationship, the current alignment of officers makes it even more so.

Owens took over the brigade in June after a year as the SETAF operations officer. And his 173rd predecessor, Col. Bill Mayville, is now SETAF chief of staff.

While the 173rd was deployed to Iraq, dozens of members of the SETAF headquarters staff spent months off the cost of Liberia, directing U.S. peacekeeping efforts there.