One year after offensive, signs of progress in Marjah 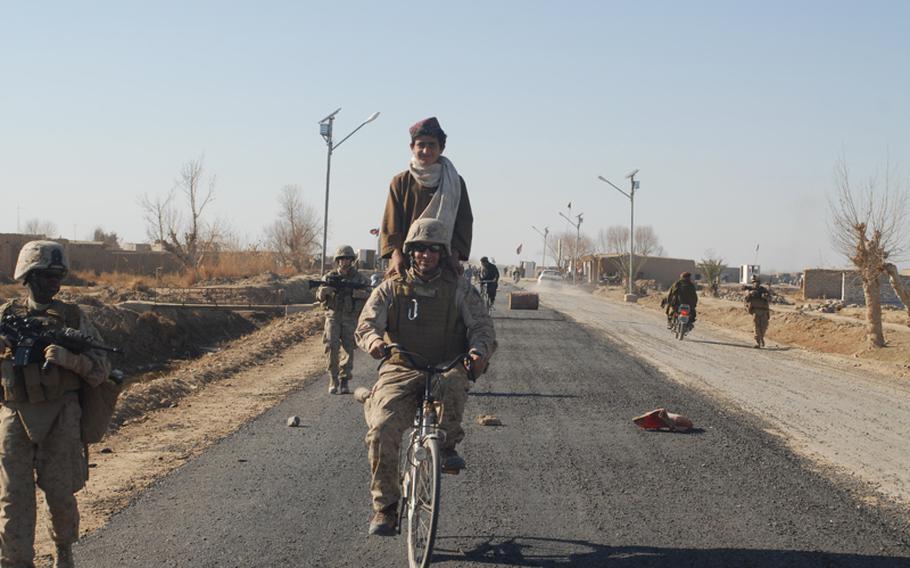 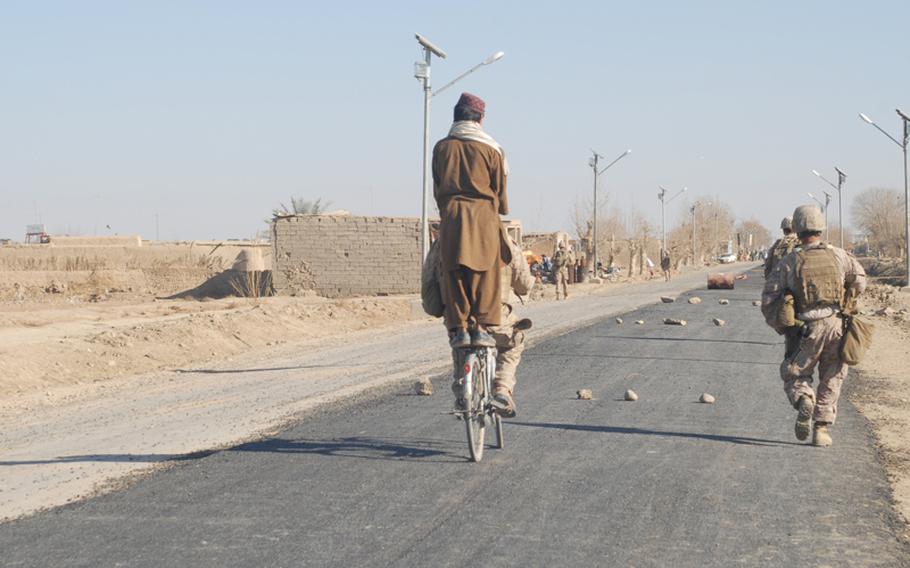 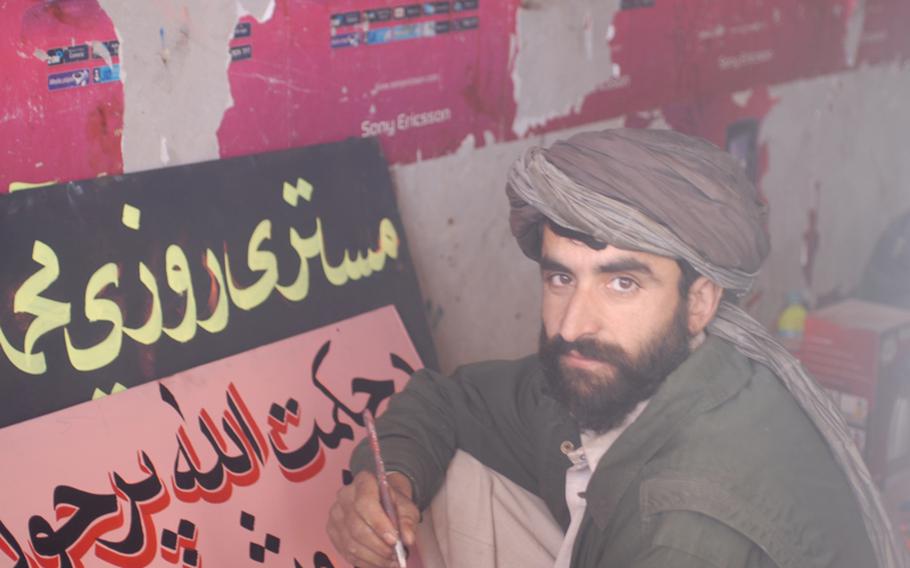 Buy Photo
Marines are paying for Marjah shopkeepers in the bazaar to upgrade their shops, which has made Rafillh, a sign painter, a happy man. He said he's earning more than he ever has. (Nancy Montgomery/Stars and Stripes) 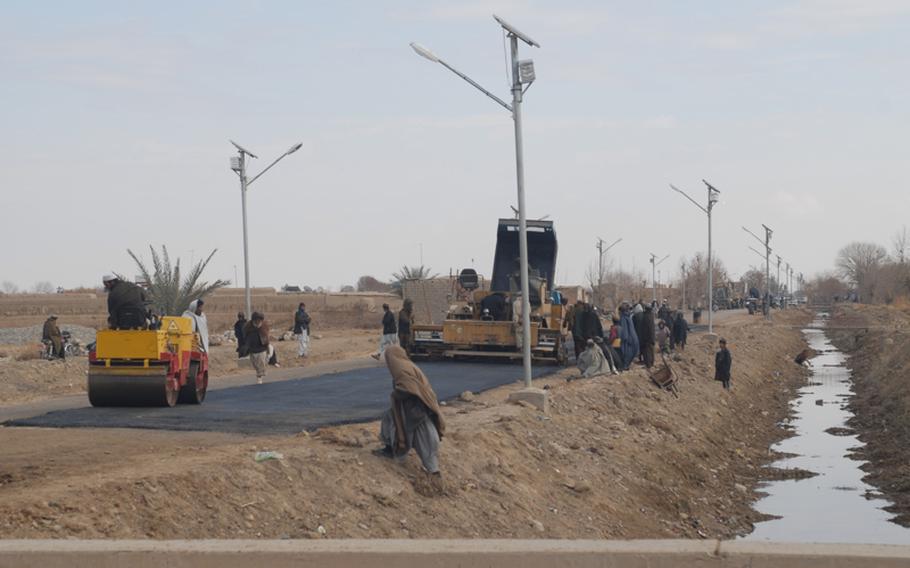 Buy Photo
Workers and an audience gather at an unexpected event: the paving of street fronting central Marjah's bazaar. It is the first paved road in the town. (Nancy Montgomery/Stars and Stripes) 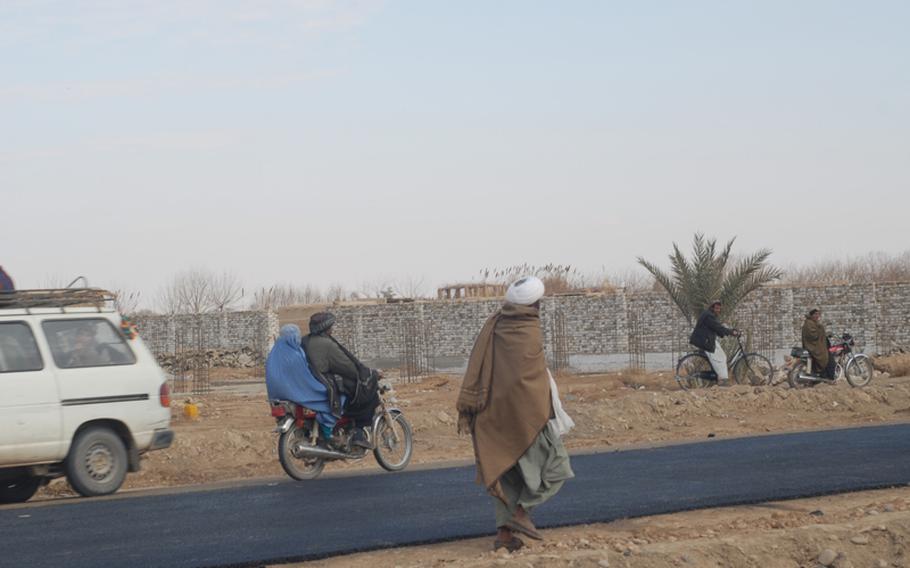 Buy Photo
Women in Marjah are covered head to toe in burqas, and seen only in cars or on the backs of motorbikes, here traveling on the town's first paved road. (Nancy Montgomery/Stars and Stripes) 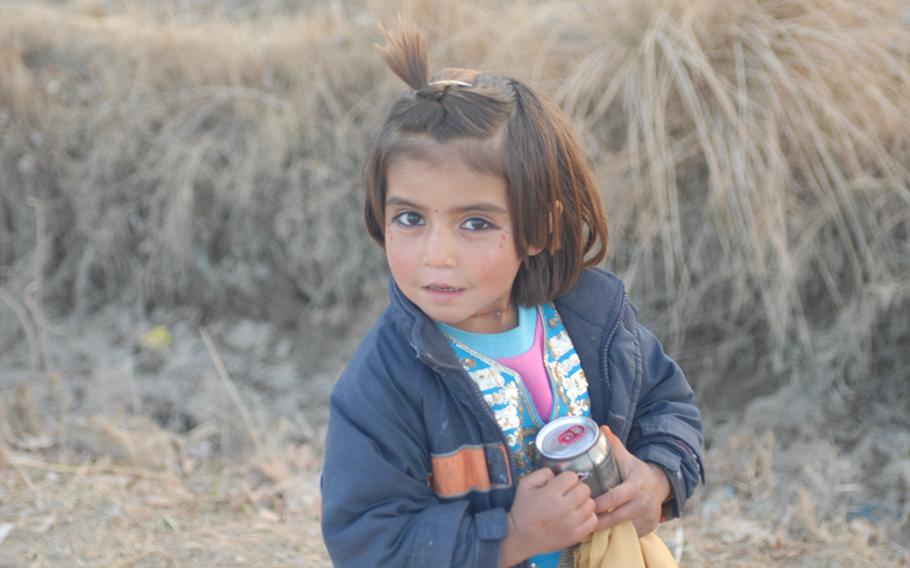 Buy Photo
A little girl in Marjah agrees to have her photo taken. Schools might open for a couple of hours a day then close when teachers or children stop showing up. (Nancy Montgomery/Stars and Stripes)

MARJAH, Afghanistan &mdash; A year ago, the farmers, opium poppy growers and insurgents in and around Marjah were under siege. Locals had fled; the bazaar had been shuttered.

In the biggest operation since the 2001 invasion, a force of 7,500 U.S. Marines and Afghan troops began on Valentine&rsquo;s Day 2010 to kill and scatter Taliban fighters. It was expected to be a quick combat assault followed by a roll-out of government services.

It didn&rsquo;t happen quite that way.

The fighting continued for months, and actually picked up as spring turned to summer. The Marine battalion that arrived in June lost 18 men in seven months, up from 10 Marines killed in the battalion involved in the February launch.

&ldquo;In May, you&rsquo;d stand here and you&rsquo;d hear an ambush, a missile, IEDs,&rdquo; said a U.S. State Department official in Marjah who declined to be named because he was not authorized to speak to the press. &ldquo;The poppy was very important, and they decided to fight for it.&rdquo;

But by September it appeared the Marjah operation had turned a corner. The Taliban had threatened to disrupt the parliamentary elections, but failed.

&ldquo;That changed a lot of the locals&rsquo; minds,&rdquo; the official said.

&ldquo;They&rsquo;d been sitting on the fence. From September on, it&rsquo;s been remarkable. And believe it or not, now I sometimes hear a gol-darned bird here.&rdquo;

The birds&rsquo; return to what is now a quieter Marjah may be a sign of progress, in a place where progress has been hard to come by.

But counterinsurgency war doctrine says that what matters most is what happens after the fighting &mdash; whether residents will be persuaded to support their new government and remain inhospitable to returning insurgents.

Rafillh, a sign painter, is among the busiest Marjah residents. With Marines paying for upgrades in the now-busy bazaar, Rafillh said he paints about 15 signs for bazaar shops a week.

The new district governor, a former Afghan army officer and communist and a proponent of human and women&rsquo;s rights, meets with Marine officers almost daily to discuss initiatives.

As Marines and NATO attempt to help build a government and deliver services where none have existed, there are schools and roads being built, as well as a midwife paid by the U.S. to give free medical assistance. There&rsquo;s a new gym in the bazaar, thanks to a U.S. loan, and more building planned &mdash; all with local hires when possible, to provide jobs.

The work is moving quickly, before the poppies come up and the spring fighting season begins.

&ldquo;In the winter months, you want to have building going on so that people see what their government is doing,&rdquo; said civil affairs Marine Maj. Chris Rogers.

Marjah is well into the &ldquo;hold&rdquo; phase of counterinsurgency warfare, Hudspeth said.

&ldquo;About 75 percent is holding and building. About 25 percent is clearing,&rdquo; he said. &ldquo;Sometimes it&rsquo;s more 50-50.&rdquo;

What&rsquo;s more, poppy production in the province has declined &mdash; another yardstick the West uses to measure success here, because the Helmand farms around the town of Marjah have long been the heart of the Afghanistan opium trade.

Helmand has traditionally provided about 53 percent of the country&rsquo;s opium, its main export and a key funding source not only for the farmers who grow poppy but for the Taliban, drug lords, traffickers and even some government officials as well.

Michael O&rsquo;Neill, ISAF Senior Civilian Representative for Helmand&rsquo;s Provincial Reconstruction Team, said poppy production was down in the province by 37 percent over the past two years.

He said he was optimistic that security in Marjah will continue to improve.

&ldquo;In Marjah, as in other parts of Helmand, we need to deepen and consolidate this progress, particularly as we approach the summer period that is often so challenging,&rdquo; O&rsquo;Neill said in an e-mail.

&ldquo;But the progress made since last summer is very clear to see, and leaves a strong foundation for us all to build on this year.&rdquo;

Yet there are some more ominous signs, as well.

Last month, Cpl. Joseph Whitehead, a combat engineer, became the first Marine killed in action since the battalion deployed three months ago. He was killed by an IED blast during a clearing operation in the district&rsquo;s outskirts.

Two other Marines have lost limbs in other IED blasts.

Whether the fighting heats up with the weather remains to be seen.

&ldquo;My prediction is they&rsquo;re going to make another try,&rdquo; Hudspeth said of Taliban fighters. &ldquo;They want to roll back the clock. But I don&rsquo;t think [the fighting is] going to be as hard as it was.&rdquo;

Since tribal politics still play a large role in Helmand, experts say some elders might align with the Taliban if they feel slighted by government appointments and largesse, or disagree with the settling of decades-old land ownership disputes.

And despite progress, life in the village remains chaotic.

The district governor has a computer but no Internet access, limited phone service and bodyguards who host dog fights in their quarters.

The gym, supposed to be open an hour a day, often isn&rsquo;t.

Schools might open for a couple of hours a day then close when teachers &mdash; or children &mdash; stop showing up.

Hudspeth, from an Appalachian family of tobacco growers, said he understands the locals and feels for them.

&ldquo;We lived on a dirt road until I was 20. My mother is from a family of 13,&rdquo; he said. &ldquo;When I see those little girls with a baby on their hips, I know what they&rsquo;re doing.&rdquo;

As Sgt. Cory Betts, who leads patrols into the bazaar sometimes twice a day, put it in a pre-patrol brief: &ldquo;There&rsquo;s an unknown amount of enemy around &hellip; The people are going to be giving you the stink eye &mdash; that&rsquo;s just what they do.

&ldquo;There have been potshots,&rdquo; he said. &ldquo;Usually it&rsquo;s the ANA or ANP (Afghan soldiers or police) shooting a dog or because they&rsquo;re bored.&rdquo;

Whether the building projects and services are sustainable, even in the best of circumstances, remains to be seen.

Marines knew the main road was going to be paved, but were surprised when workers showed up one morning and started the work, all without preparatory grading and drainage.

&ldquo;I heard there&rsquo;s one scraper and one dump truck in Lashkar Gah. And they&rsquo;re broken,&rdquo; said Maj. Rose Griffith, a civil affairs Marine assigned to &ldquo;de-conflict&rdquo; projects initiated by a variety of entities, including Marines, and USAID.

There is no department of public works to maintain the roads; what becomes of it will be anybody&rsquo;s guess.

&ldquo;I&rsquo;m always cognizant that this is taxpayer money,&rdquo; Griffith said.

&ldquo;It does wear you out. The sustainability is unknown. Because we have an unknown &mdash; the Afghans. They have to do it themselves.&rdquo;