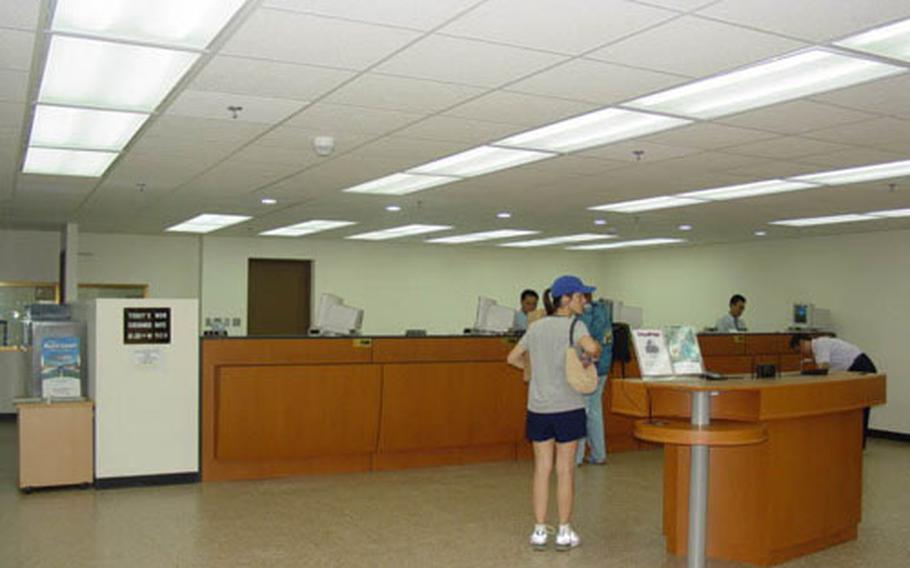 Soldiers and families at Camp Humphreys now are able to knock out their postal and banking errands with a single stop.

The three have moved from their former separate locations to the base&#8217;s &#8220;downtown&#8221; section, where the post exchange, theater, bus station and other key spots are concentrated.

Officials will mark completion of the $360,000 building overhaul Tuesday with a 10 a.m. ribbon-cutting ceremony.

The former exchange was built in 1972 and closed last summer after a newly built PX opened for business across the street. The redone former PX means more space for its three tenants and the convenience of one-stop shopping for customers, base officials said.

&#8220;It&#8217;s a consolidation of three agencies that most soldiers need on a weekly if not a daily basis,&#8221; said Susan Barkley, Camp Humphreys public affairs chief. &#8220;It&#8217;s another step in defining our downtown area to make everything accessible to soldiers and family members and it is a one-stop kind of a concept.&#8221;

The Community Bank branch moved into the new building Aug. 8 and Aug. 9, said branch manager Kim Kyong-ah. The branch, at 3,840 square feet in size, is almost twice that of the 1,940-square-foot branch it had occupied in a straight-wall Quonset hut built in 1952. Base officials eventually may refurbish the old structure for continued use, Mirabal said.

The postal operation moved into the new quarters Tuesday, increasing its operating space 76 percent, from 3,962 square feet to 6,987 square feet. It previously had worked in a corrugated metal and concrete building built in 1961. Its new quarters afford a bigger mail handling space including a registered mail area, and a loading dock, which the previous location lacked.

The U.S.A. Federal Credit Union took up its new quarters in May and has been in business there since, said teller supervisor Song Myong-ok. It occupies 1,989 square feet, slightly more than double the 960 square feet it used to occupy in a Quonset hut built in 1952. Officials will tear down the 1952 structure and turn the space into a parking lot, Mirabal said.

At the Community Bank, branch manager Kim said her staff is pleased with their bigger, brand new facilities and that customers are saying good things too.