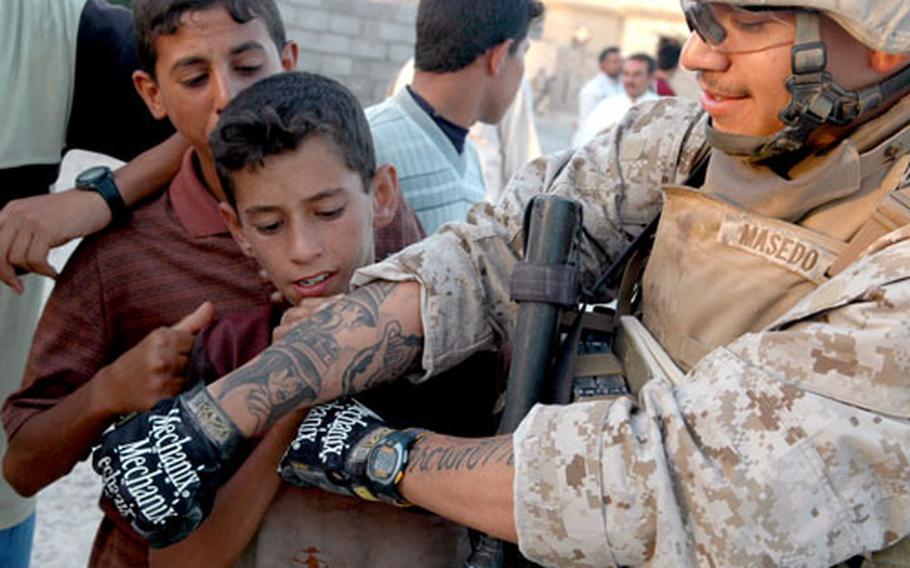 But as he trudged below thickets of towering reeds, past vicious dogs, and over bomb craters plugged with concrete, Welter knew that he and every other Marine in Iraq would &#8212; with any luck &#8212; see their last of Route Mets in a matter of days.

The road, along with almost 500 square miles of Euphrates River farmland, is just the latest chunk of Al Anbar Province to fall under independent control of the Iraqi army. In less than a month, when Welter and the rest of the 1st Battalion, 1st Marine Regiment return home to southern California&#8217;s Camp Pendleton, units from the Iraqi army&#8217;s seasoned 1st Division will take control of this area roughly seven miles north of Fallujah.

At Observation Post Omar, Iraqi army soldiers have been leading patrols through the lush, canal-fed farm region with Marines following along as supervisors.

Overall, three 1st Iraqi Army Division brigades have assumed independent control in Anbar, the restive Sunni Muslim province of western Iraq, and plans have been made for a fourth brigade to cover its own territory as well.

The Iraqi units are currently responsible for security in Fallujah, Abu Ghraib, Habbaniyah, and areas between Karma and Nassir Wa Salaam.

The U.S. Marines, who oversee operations in Anbar, say they have been working steadily to stand up Iraqi army units in their territory and pave the way for an effective provincial government.

Preparations for the handover of territory north of Fallujah began in earnest more than a week ago when more than 100 Iraqi army soldiers moved into what was once known as OP-4, a small walled compound that once served as an Iraqi government morgue. The compound&#8217;s name has since been changed to OP Omar, in honor of a 2nd Battalion, 4th Brigade, 1st Iraqi Army Division soldier who was killed while battling insurgents.

A second, nearby outpost, OP 3, will also be turned over to Iraqi soldiers, who have dubbed the position OP Mohammed.

On Saturday, Welter, Long and other Marines from 3rd Platoon, Company A, made their way down the long roadway as shepherds chased after flocks of bleating sheep and cows eyed the soldiers warily. As he walked past a Russian-made armored vehicle abandoned in a canal long ago and overgrown with reeds, Welter reached out and rapped on the derelict vehicle&#8217;s steel skirt. &#8220;Good luck,&#8221; he said.

The 1-1 Marines, who fall under the command of Regimental Combat Team 5, said that despite roadside bomb detonations and mortar and sniper attacks, they were fortunate in that they had not had a Marine killed.

While they are happy to be going home in roughly a month&#8217;s time, it looked as if letting go of the area and letting the Iraqis move in might be a little more difficult than they let on.

As he made his way through the back yards of Iraqi farm houses and over furrowed fields Saturday, Welter chafed a bit when an Iraqi army sergeant began giving him directions on how to cross a canal.

The 1st Iraqi Army Division has many of the new Iraqi army&#8217;s most seasoned soldiers. The division, which is made up mostly of Shiites from southern Iraq and Baghdad, have fought alongside Americans in Fallujah, Mosul, and Al Qaim.

The effort to replace U.S. Marines in Anbar has encountered significant challenges in the form of logistical support, pay and promotions administered by the Iraqi Ministry of Defense, according to Marine commanders.

Stories of soldiers and officers going for months without pay and then deserting or refusing to cooperate with coalition forces are common across Iraq, as are stories of poor discipline among soldiers who find themselves in a combat environment just a few short weeks after enlisting.

Marine officials say such difficulties are all part of creating a new army.

For their part, those Iraqi army soldiers who had moved from Fallujah to OP Omar said they were happy to be there.

The officer said that taking over from the Marines was a bittersweet experience.