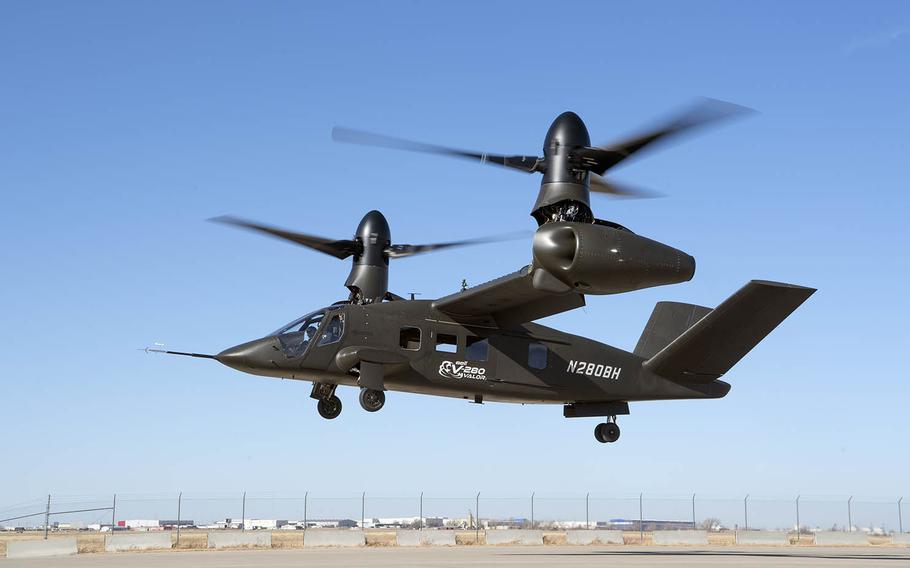 Bell's V-280 Valor tilt-rotor helicopter, which looks similar to the Osprey, recently made its first flight over Amarillo, Texas. (Courtesy of Bell Helicopter)

Bell's V-280 Valor tilt-rotor helicopter, which looks similar to the Osprey, recently made its first flight over Amarillo, Texas. (Courtesy of Bell Helicopter) 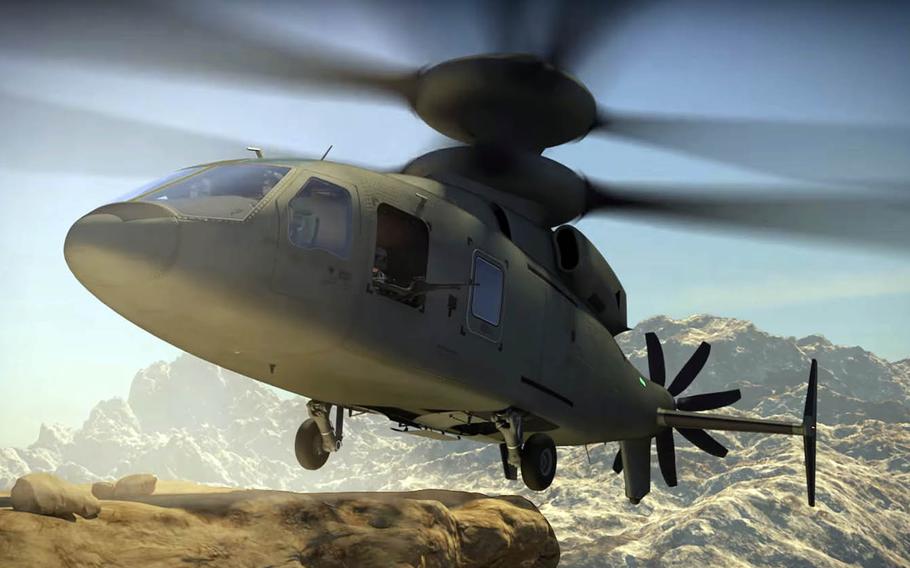 This still image from an animated video produced by Lockheed Martin shows the SB-1 Defiant helicopter that's be developed jointly by Sikorsky and Boeing. (Courtesy of Lockheed Martin)

A single aircraft design can’t replace the Army’s entire helicopter fleet, according to the director of the service’s Future Vertical Lift program.

“It’s a myth that the Army is looking for a single [type of] helicopter to perform all its vertical-lift missions,” Dan Bailey, a former AH-64 Apache pilot who is spearheading efforts to upgrade the fleet, told Stars and Stripes last month.

“In fact, we will have a family of aircraft. Some may be tilt-rotor and some may be coaxial,” he said. “We want to make sure we have advanced capabilities and configurations that allow that.”

The Army has been looking at vertical-lift options since 2008 and has proposals for aircraft that can carry a payload of 12 troops and four crew, hover at 6,000 feet and fly 2,100 nautical miles at a speed of at least 230 knots.

“Our current fleet is antiquated,” Bailey said, noting that designs for the Apache and UH-60 Black Hawk date to the 1970s and even the V-22 Osprey tilt-rotor aircraft was designed in the 1980s.

Aircraft manufacturers Bell, Boeing and Sikorsky, which is owned by Lockheed Martin, have prototypes that could eventually replace everything from Black Hawks and Apaches to CH-47 Chinook transports and OH-58 Kiowa observation helicopters.

Last month, Bell’s V-280 Valor tilt-rotor aircraft made its first flight over Amarillo, Texas. The Valor takes lessons learned from the Osprey to produce a machine that should be cheaper to operate, Bailey said.

Meanwhile, the SB-1 Defiant — a helicopter with coaxial rotors and a push propeller that’s being jointly developed by Boeing and Sikorsky — is close to flying and will likely launch later this year, he said.

The Army’s Joint Multi-Role Technology Demonstrator project, also overseen by Bailey, is an effort to develop the helicopters along with a “technological backbone” of computers and software inside them, he said.

“The Army is setting out requirements that are achievable and affordable to move its fleet to the next generation,” he said.

Lighter, stronger materials and improved vibration control means it’s possible to make faster, cheaper and more efficient aircraft than in the past. For example, active vibration control involves moving weights around a rotor system to balance it in flight with the help of sensors and computers, Bailey said.

Bell and Boeing/Sikorsky plan to complete their flight test programs by the end of 2019, he added.

Designs for the helicopters’ computer systems have also advanced since an initial demonstration in 2014. The Army is looking for technology that can seamlessly integrate things like third-party navigation or communication systems, Bailey said.

“We are looking to award contracts on that late next summer and execute from late 2018 to 2020,” he said.

High-tech gear means the new helicopters will be able to fly with or without onboard pilots, Bailey said.

“The requirement for these aircraft is for them to be optimally crewed, which sometimes means no crew,” he said.

For example, an aircraft that is transporting only cargo could fly autonomously, he added.

“Like the [ground] vehicles we drive, these aircraft will be highly integrated. The pilots won’t be doing a lot of flying. For the most part, the aircraft will be commanded to fly to a certain altitude and direction. The pilot will just deviate from whatever an aircraft is doing as necessary,” he said.