'One of the toughest kids I’ve ever met': Families mourn Green Berets killed in Afghanistan 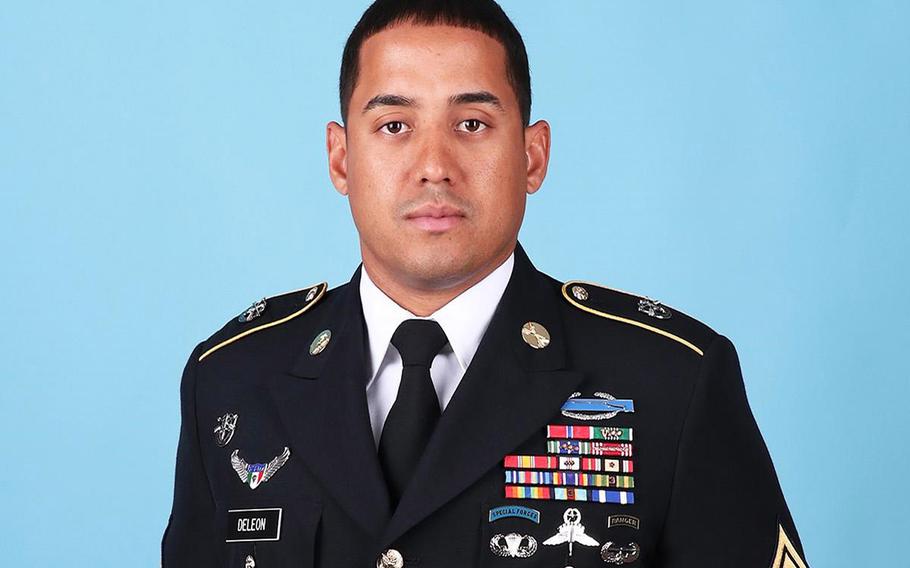 The two Green Berets killed in combat in Afghanistan Wednesday are being remembered by their unit, and mourned very differently by their families.

Deleon-Figueroa’s uncle shared photos of him as a child and in his dress uniform. His nephew, from Chicopee, Mass., had enlisted in the Army over 13 years ago to “go and be somebody,” Robert Figueroa recalled in a phone interview in which he audibly choked up.

“He was a tough kid, one of the toughest kids I’ve ever met,” Figueroa told Stars and Stripes on Thursday.

Both Deleon-Figueroa and Gonzalez were mortally wounded after they came under small arms fire in Afghanistan’s restive Faryab province, the Pentagon said in a statement Thursday. No further details about the incident were provided.

The U.S. Special Forces had arrived in Almar district, on the border with Turkmenistan, on Wednesday morning for a joint operation with their Afghan counterparts, provincial officials said.

The operation appeared to target the Taliban, which is the only militant group active in the area, provincial police spokesman Abdul Karim Yoresh said.

A Taliban statement Thursday said an hours-long battle with “raining enemy troops” in Almar had killed U.S. forces the day before.

The two fallen Green Berets, who both joined the 7th Special Forces Group (Airborne) in 2014, were posthumously promoted to master sergeant, USASOC said in a statement.

Both were “a part of our family,” said Col. John W. Sannes, 7th SFG (A) commander, in the statement, vowing they would not be forgotten.

“Our priority is to now provide the best possible care to the families of our fallen warriors,” Sannes said.

The two soldiers’ deaths bring the number of U.S. troops killed this year by hostile enemy action in America’s longest war to 14, the highest number since former President Barack Obama formally ended combat operations in Afghanistan in 2014. Thirteen American troops were killed by enemy forces in 2018 and 39 were killed in action in 2014, according to Pentagon data.

The U.S. war in Afghanistan is now in its 18th year, with some 14,000 American troops deployed there and charged with two separate but related missions — to train and advise Afghan troops battling Taliban insurgents, and to conduct counterterrorism operations against al-Qaida and the Islamic State group.

U.S. combat deaths in Afghanistan have increased this year, even as peace talks ramp up between U.S. and Taliban officials. Both sides have both signaled they are close to reaching an agreement that would lead to at least a partial withdrawal of American forces from the country.

The Taliban has demanded a full withdrawal of American forces, while the United States has insisted that the hardline group ensure Afghanistan does not revert to a haven for terrorist groups and that women’s rights are upheld in the country.

The United States has also insisted the Taliban negotiate with the central Afghan government, a condition at which Taliban officials have balked, labelling Afghan leaders as American puppets.

Since the United States first launched military operations in Afghanistan in October 2001, more than 2,400 troops have been killed and more than 20,000 have been wounded in action, Pentagon statistics show.

Deleon-Figueroa was on his third deployment to Afghanistan and the sixth deployment of his career, according to biographical information provided by Lt. Col. Loren Bymer, USASOC spokesman.

A GoFundMe page set up after his death said he is survived by three daughters.

“Luis was a father, son, grandson, brother, and best friend to many,” the page said. “Luis’s larger than life personality and undying love for New England sports will leave a void in the world that can never be filled.”

His uncle said he was proud of him.

“He chose to join the military after his mother died 14 years ago,” he said. “It’s hard to know that he’s not around.”