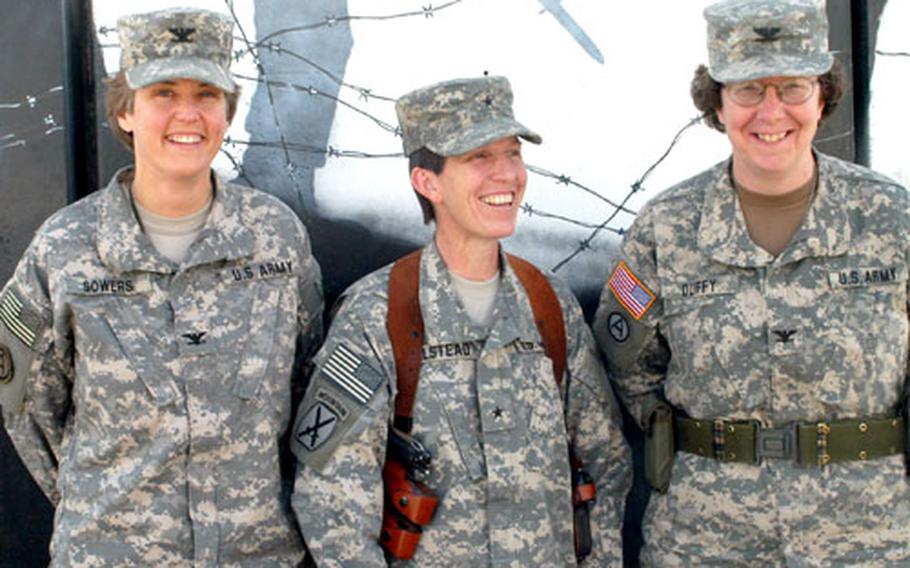 The 3rd Corps Support Command is classified by some as “unique” because it is headed by three women. Those women, from left, Col. Susan Sowers, Brig. Gen. Becky Halstead and Col. Sharon Duffy are stationed at Camp Anaconda on Balad Air Base in Iraq. (Nancy Montgomery / S&S)

Just about everything soldiers in Iraq use, eat, wear, praise or curse &#8212; almost everything except the dusty air they breathe &#8212; comes courtesy of the only battlefield command in the U.S. military headed and run by women.

Since last fall, Brig. Gen. Becky Halstead, commander of the 3rd Corps Support Command based in Wiesbaden, Germany, has been the one ultimately responsible for ensuring that soldiers get bullets and ice, boots and fuel, spare parts and everything else they need.

The only female commanding general in Iraq, and one of only 14 in the Army, Halstead has help: her deputy commander, Col. Sharon Duffy, and her chief of staff, Col. Susan Sowers. Because there are so few women in high-ranking positions in the military, let alone Iraq, most observers believe the 3rd COSCOM leadership is unique.

The three, now headquartered at Camp Anaconda on Balad Air Base and overseeing a command of some 20,000, say that being women in a sea of men in a war zone makes no difference in how they accomplish their mission. Halstead, the two colonels say, is unusually humane and caring, yet they both worked for another female officer who was not. And they have seen &#8220;warm and fuzzy&#8221; male commanders, including one so over-the-top, Duffy said, &#8220;He takes ownership of feelings people don&#8217;t even have.&#8221;

Like many military women who reach the upper ranks of officer or enlisted corps, none of the three is married or has children. Most of their male colleagues are married, often to women who helped them rise through the ranks.

Halstead said she&#8217;s known many &#8220;very competitive&#8221; women who chose to leave the military, sometimes after having children. Even without children, she said, it&#8217;s difficult for ambitious female officers to maintain the same sort of family life that men do.

Next to nursing, logistics was one of the first career fields open to women when the three started out in the military. Yet all three acknowledge that the fact that they are who they are is significant. &#8220;It&#8217;s encouraging for the younger women,&#8221; Halstead said. &#8220;They see anything&#8217;s possible.&#8221;