One more goodbye: N.C. Guard brigade sent off in style 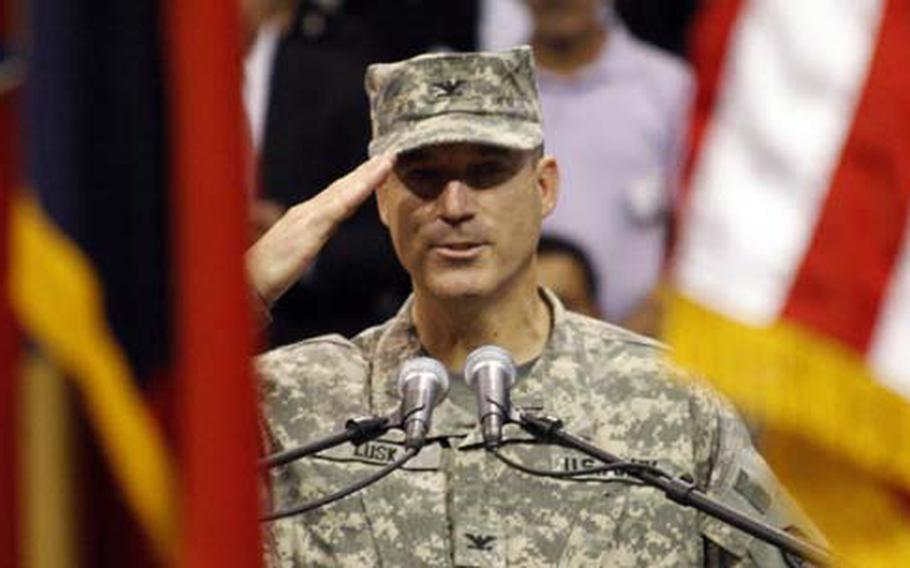 FAYETTEVILLE, N.C. &#8212; An estimated 10,000 family members, supporters and dignitaries gathered at the Crown Center Coliseum to send off the 30th Heavy Brigade Combat Team, which is departing this week for a second tour in Iraq. At least several hundred spectators had to watch the ceremony from a nearby building via video link.

In its return to Iraq, the 30th becomes the first full National Guard brigade to conduct combat operations twice in the same conflict. The brigade, comprising units from North Carolina, West Virginia and Colorado, mobilized in December.

Pfc. James Benefield, a medic with HHC, 1st Battalion, 120th Combined Arms Regiment, spent much of his day with his fiancee, Ashley Crowder, of Greensboro, N.C.

The brigade&#8217;s commander, Col. Gregory A. Lusk, emphasized the importance of both family support for the soldiers, and vice versa.

"The ones who stay back home, they have the tough job," Lusk said before the ceremony.

After the ceremony, the soldiers boarded buses back to nearby Fort Bragg. For most, it was the final goodbye before they fly to Kuwait over the next several days.

After training at bases in Georgia, Mississippi, California and Virginia, the brigade consolidated at Fort Bragg for final preparations before moving to Kuwait.

The 30th, nicknamed "Old Hickory" in honor of North Carolina native Andrew Jackson, served nearly a year in eastern and northern Iraq in 2004 and early 2005 under the 1st Infantry Division.