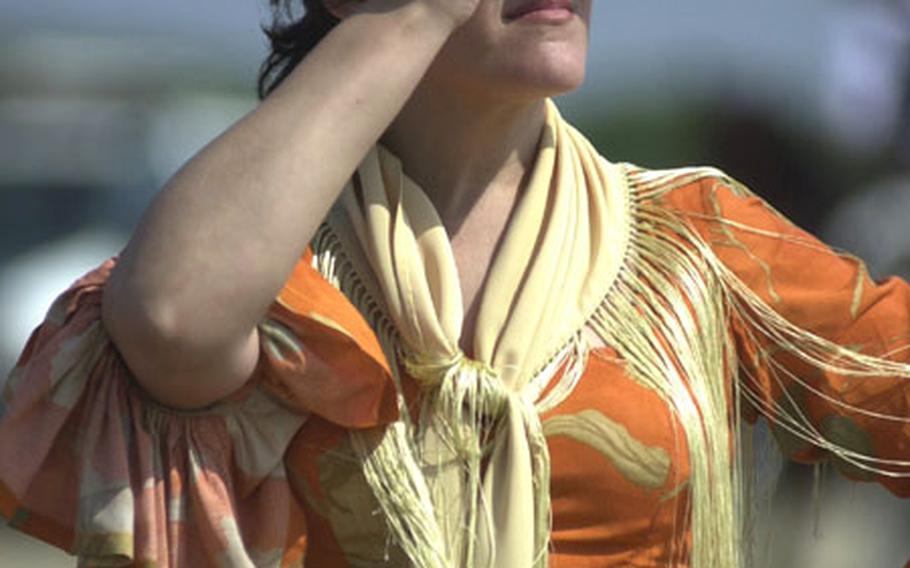 A Spanish woman in a traditional gypsy dress on Wednesday watches horses and carts unload from a ferry boat onto the coast of Donana National Park near Sanlúcar de Barrameda, Spain. More than 1 million people are expected to make the pilgrimage to the city of El Rocío this week. It is Spain&#39;s largest Catholic pilgrimage. (Scott Schonauer / S&S)

A Spanish woman in a traditional gypsy dress on Wednesday watches horses and carts unload from a ferry boat onto the coast of Donana National Park near Sanlúcar de Barrameda, Spain. More than 1 million people are expected to make the pilgrimage to the city of El Rocío this week. It is Spain&#39;s largest Catholic pilgrimage. (Scott Schonauer / S&S) 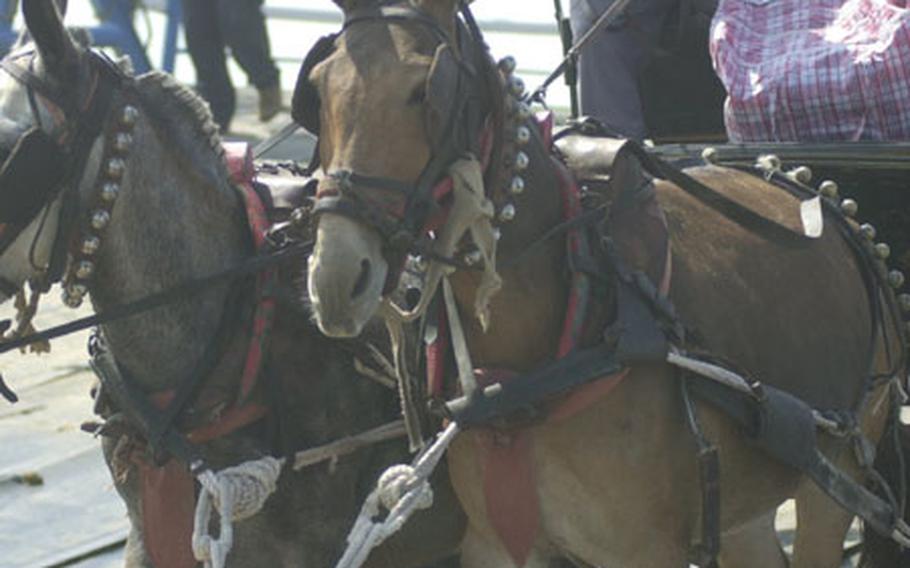 A Spanish man tries to steer a cart off a ferry boat near Sanlúcar de Barrameda on Wednesday. (Scott Schonauer / S&S) 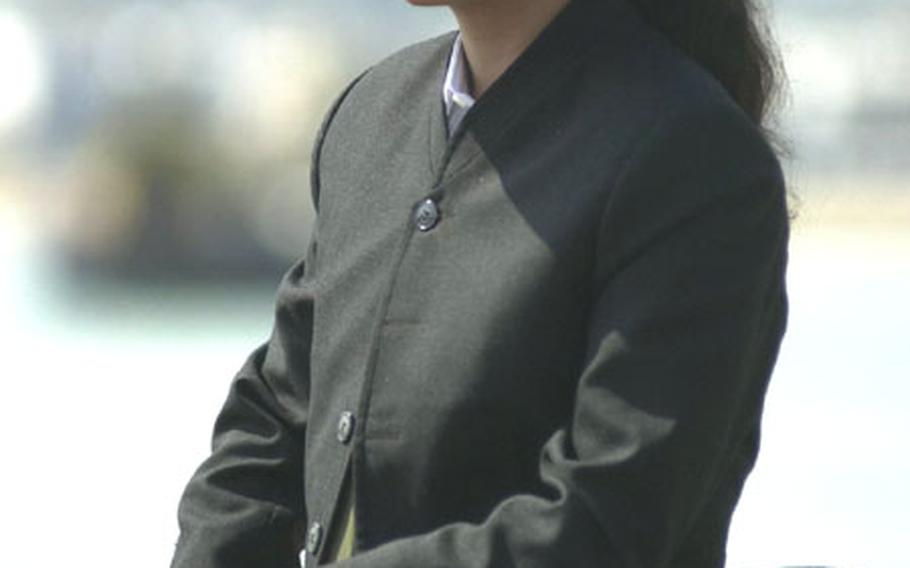 A Spanish woman on a horse waits along the beach across from Sanlúcar de Barrameda, Spain. (Scott Schonauer / S&S) 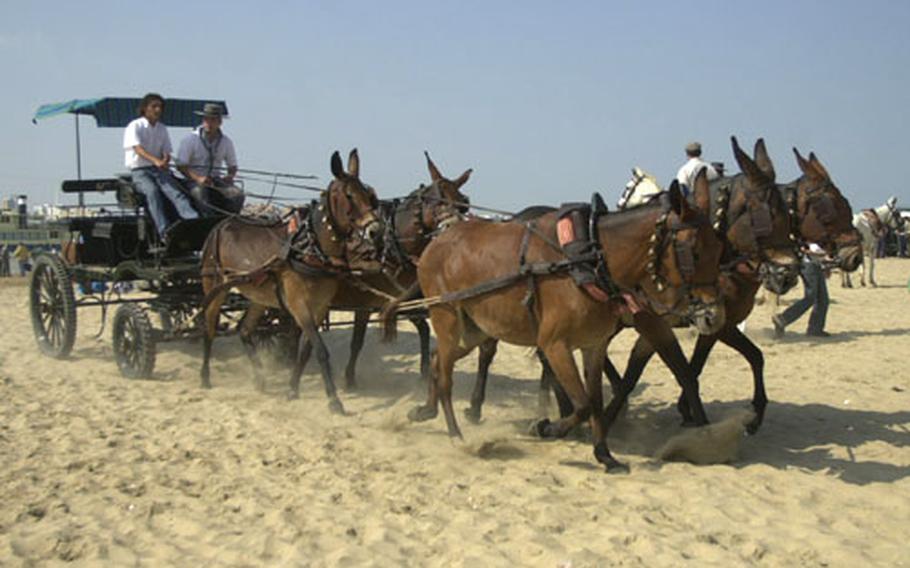 A cart on Wednesday is pulled through the beach at Donana National Park, near Sanlúcar de Barrameda, Spain. (Scott Schonauer / S&S) 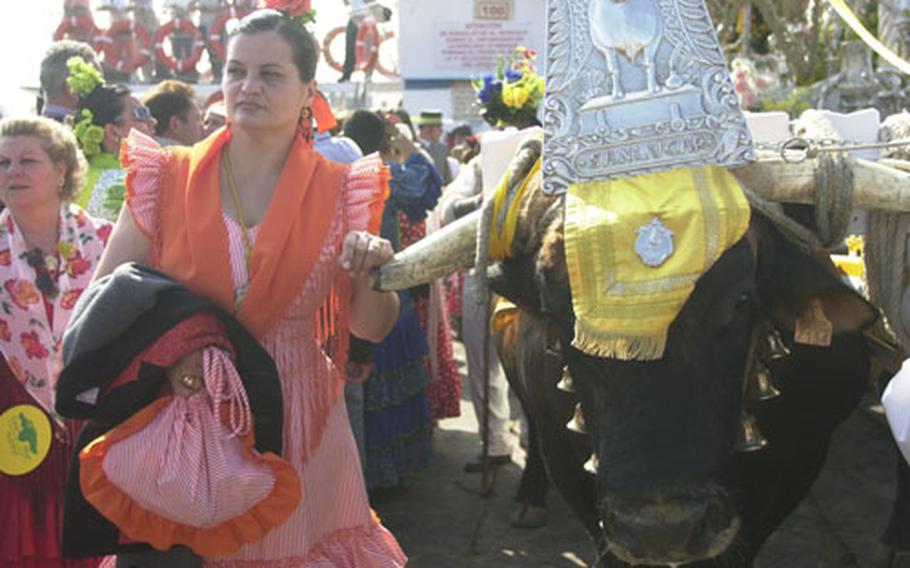 A Spanish woman on Wednesday stands holding onto the horns of an ox aboard a ferry transporting people and a silver processional piece from Sanlúcar de Barrameda, Spain, across the Guadalquivir River to Donana National Park. (Scott Schonauer / S&S)

SANL&#218;CAR DE BARRAMEDA, Spain &#8212; They come from across Spain and as far away as Alabama, arriving by foot, horseback, covered wagon, even in a Japanese-made four-wheel drive SUV.

Every year, pilgrims make the dusty trek to a small town between the cities of Huelva and Seville to pay homage to La Virgin del Rocio. They have fun with friends they see every day and amigos they see only once a year.

Romeria del Rocio, or Pilgrimage to The Rocio, is one of Spain&#8217;s biggest festivals and most popular religious pilgrimages. This year&#8217;s event is expected to attract more than 1 million people over the weekend.

Carlos Nuanes, 82, a retired U.S. Navy lieutenant, has participated in the last 44 pilgrimages, going back to the time he was stationed at Naval Station Rota. The town of Rocio is about 125 miles by car from Rota.

Pilgrims from Rota and El Puerto de Santa Maria began making the pilgrimage on Tuesday. Most people belong to &#8220;brotherhoods&#8221; that make the journey together, sharing food, wine and music.

Nuanes&#8217; brotherhood in Sanl&#250;car started Wednesday by crossing the Guadalquivir River to Donana National Park, a marshland reserve, by a ferry barge.

On Wednesday, the men climbed aboard the ferry in their wide-brimmed bolero hats and tall black boots, while the women followed wearing frilly, colorful gypsy dresses. A temporary chain-link fence separated the hundreds of onlookers from the passing brotherhoods on horseback and wooden carriage

A pair of oxen pulling a silver altar piece stood in the center surrounded by pilgrims who sang, danced and clapped to the rhythm of a couple playing flutes and drums.

Once they got to the other side of the river, pilgrims met with friends and took a break by eating or singing before resuming the pilgrimage. The caravan of carriages is slow, and there are many breaks along the way to make time for eating, drinking and flamenco dancing.

The pilgrimage began centuries ago. Legend has it that a hunter found a small statue of the Virgin Mary in a hollowed tree trunk near the village of Almonte, an area known for its marshlands. When word spread about the discovery, people came to the area to pray.

Today, people come every spring to take part in the festivities. On Monday, the statue of the Virgin Mary will be brought out and people will parade it through the city&#8217;s streets. Women on balconies will shower it with flowers and people will clamor to touch it. It takes nearly all day to carry the statue along a route that is less than a mile long.

The festival is not just a religious event. Nuanes&#8217; wife, Leilani, 66, said the pilgrimage and the events afterward are opportunities to have fun with friends.