One Martin replaces another as Chinhae base commander 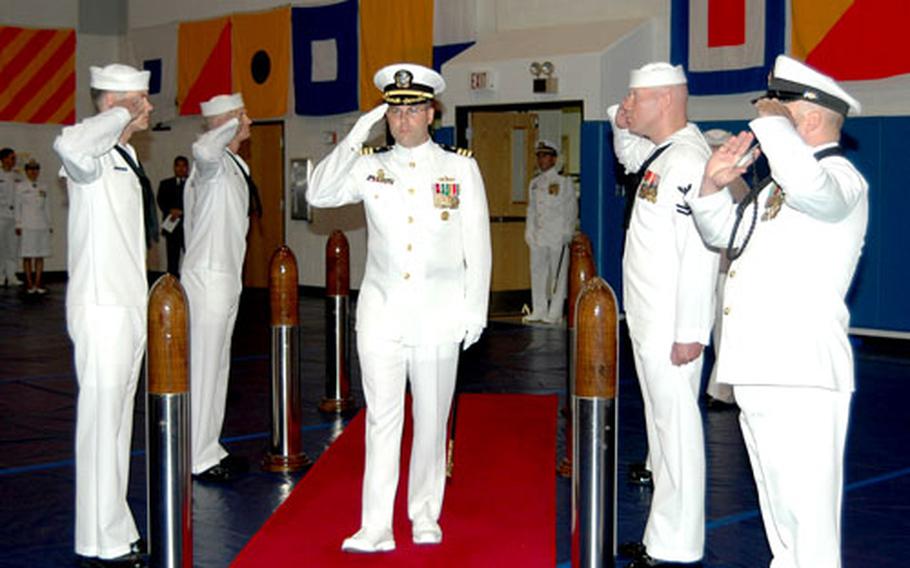 Cmdr. Randall H. Martin is “piped aboard” during a change-of-command ceremony Friday at which he replaced Cmdr. Francis X. Martin as base commander for Chinhae Naval Base, South Korea. (David McKee / U.S. Navy)

A new commander assumed leadership at Chinhae Naval Base on Friday during a ceremony at the U.S. Navy&#8217;s only base in South Korea.

Cmdr. Randall H. Martin replaced Cmdr. Francis X. Martin as commander, Fleet Activities Chinhae, at the 90-acre base during a 10 a.m. ceremony in the gym.

&#8220;The importance of the role that the Frank Martin family has played through the course of his years as Commander, Fleet Activities Chinhae needs to be trumpeted up front. &#8230; Their role as ambassadors to the (Republic of Korea) navy, the city of Chinhae and the people of Korea has been hugely important to our alliance and our countries.&#8221;

In farewell remarks, Francis Martin said his Chinhae service has been &#8220;a great honor and the highlight of my career.&#8221; And he had a word of parting advice for those in leadership positions at the base.

&#8220;Only six out of the 150 active-duty personnel currently assigned in Chinhae attended this ceremony two years ago when I assumed command,&#8221; he said. &#8220;A 96 percent turnover rate in Chinhae in two years demands leadership to concentrate daily on the training and indoctrination processes to welcome new sailors to Korea. I encourage all leaders to concentrate on improving the sponsorship process to take care of our newly reporting sailors. Shipmates need to take care of shipmates.

In assuming command, Randall Martin said Chinhae would &#8220;deliver best-value service supporting the operating forces, our people, and our base.&#8221;

Randall Martin enlisted in 1980 and in 1988 graduated from the U.S. Naval Academy. He has a background in anti-submarine warfare and logistics.