One Marine platoon, 25 miles of road, and danger lurking around each corner 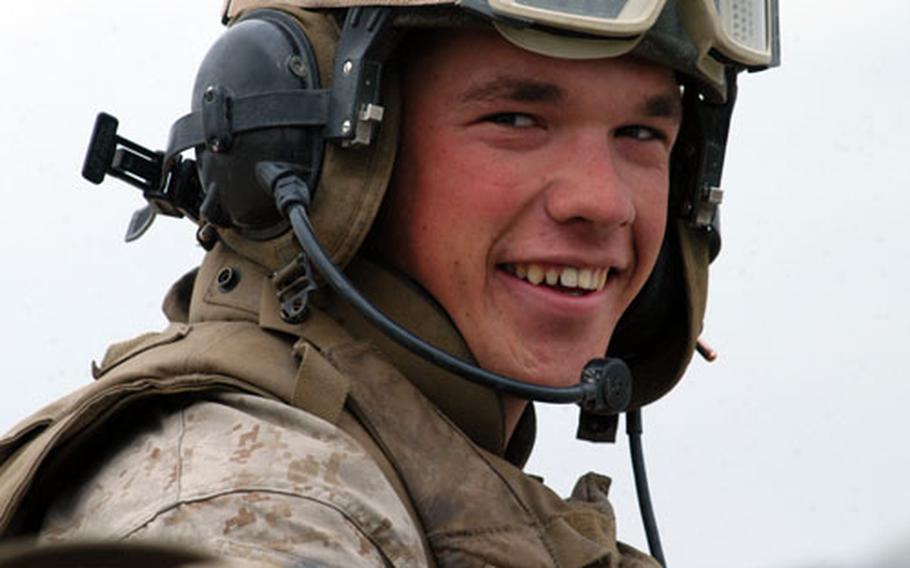 Cpl. Chris Campbell, 21, is a driver of an Amphibious Assault Vehicle. The tracked vehicles are easy enough to drive, he said, and his favorite part is taking sharp turns to jostle the passengers. (Sandra Jontz / S&S)

Cpl. Chris Campbell, 21, is a driver of an Amphibious Assault Vehicle. The tracked vehicles are easy enough to drive, he said, and his favorite part is taking sharp turns to jostle the passengers. (Sandra Jontz / S&S) 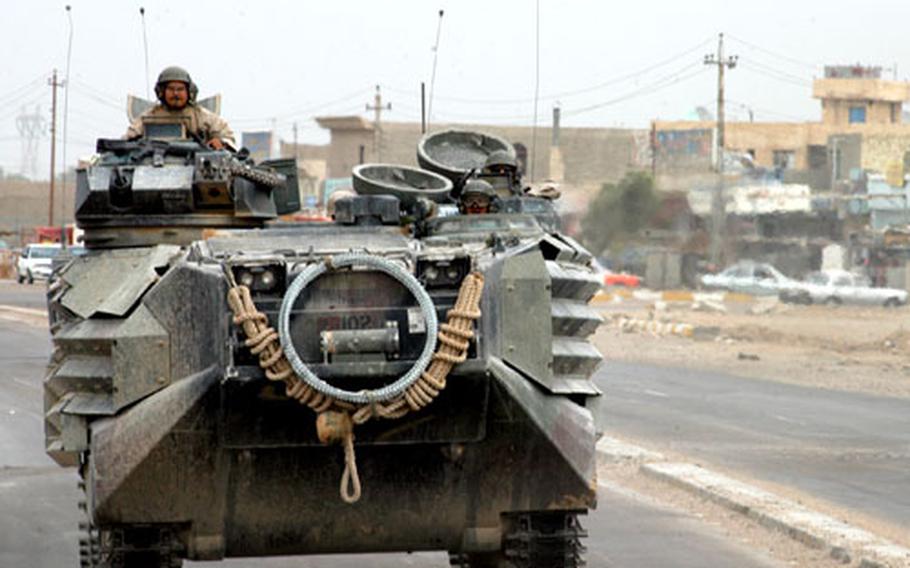 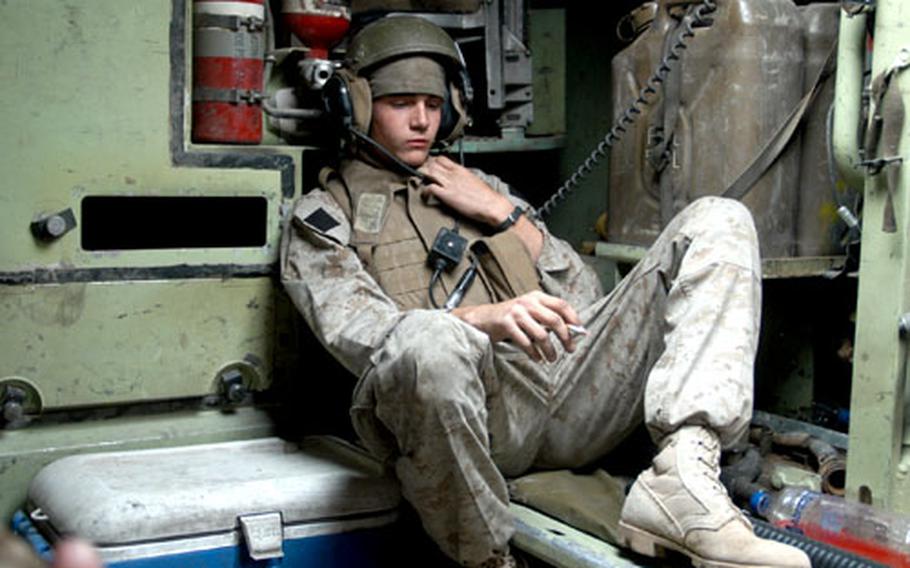 Lance Cpl. Rocky Archer, 20, an Amphibious Assault Vehicle mechanic, leans back and smokes a cigarette that he lit using the extremely hot engine to his right. (Sandra Jontz / S&S) 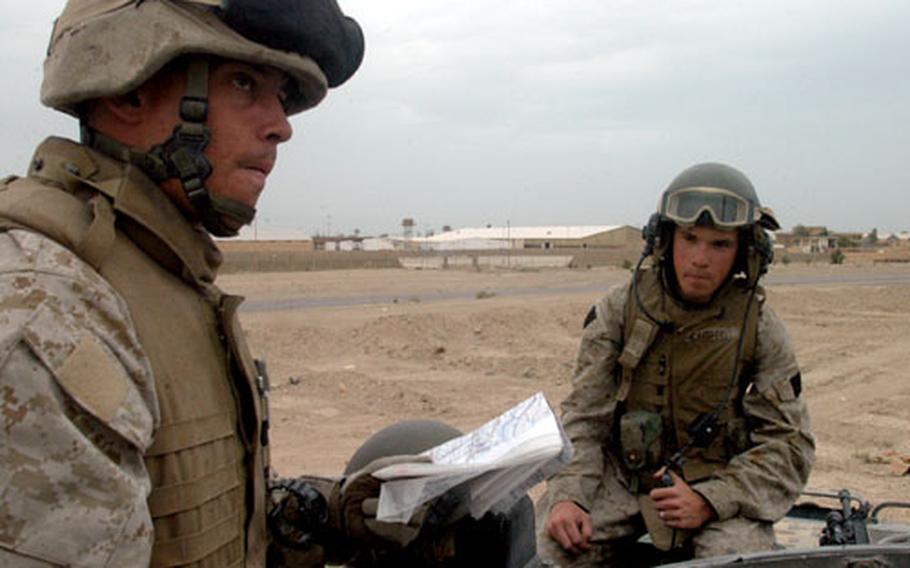 Gunnery Sgt. Brendan Slattery, left, looks over a road map of his area of responsibility — the 25 miles of Main Service Road Michigan — and discusses where Marines might set up vehicle checkpoints and observation posts along the way with track commander Sgt. Frank Drake (not shown), and Cpl. Chris Campbell, right, the driver of the Amphibious Assault Vehicle. (Sandra Jontz / S&S) 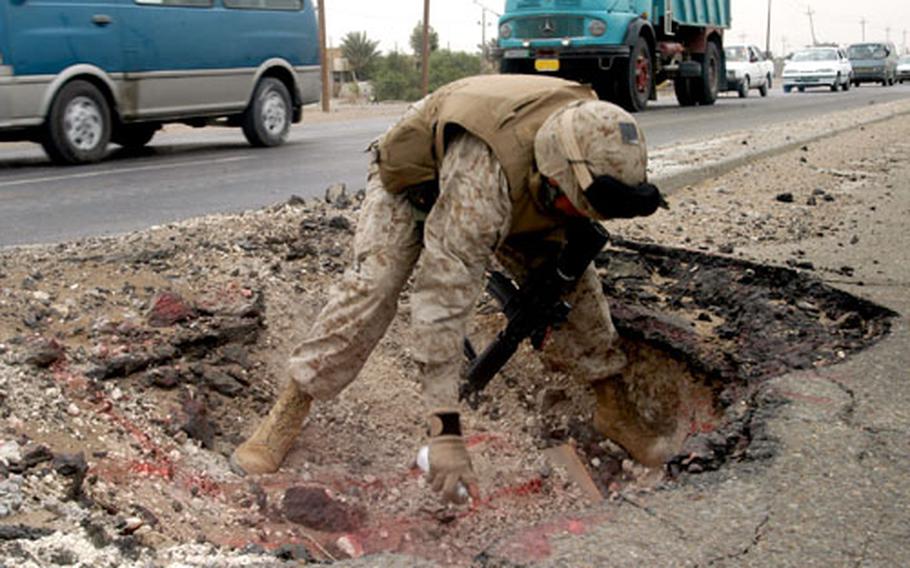 Slattery marks the crater left earlier by a roadside explosion on Main Service Road Michigan with red spray paint, which not only marks the location, but lets Marines monitor the hole to see if anyone tampers with it or tries to hide another explosive. Insurgents frequently plant roadside bombs on the road. (Sandra Jontz / S&S)

CAMP FALLUJAH, Iraq &#8212; Gunnery Sgt. Brendan Slattery knows just about every crater, pothole and pile of trash along Main Service Road Michigan &#8212; all 25 miles of the part he patrols over and over.

The platoon routinely runs nine-hour missions that entail driving up and down the road a dozen times or more in an amphibious assault vehicle, or AAVs, scouting for anything that looks out of the ordinary.

And anything that stands out is dangerous. Insurgents have left roadside bombs in plastic bags, in cinder blocks, in dead dogs. Vehicles feigning mechanical problems have been car bombs.

Noticing them all is not easy.

He is aided by the watchful eyes of the track commander, Sgt. Frank Drake, and the driver, Cpl. Chris Campbell, who both also have memorized the roadway.

The armored vehicles vibrate so much it seems enough to shake the teeth right out of your head, he said. Feet ache from the jostling, not to mention sore backs and rear ends. Blowing sand and exhaust fumes burn the eyes, nose and throat. His nose drips the entire mission, since he sits right next to the exhaust pipe.

The noise is deafening, and leaves your ears ringing for hours afterward, even with the use of earplugs. The engine burns so hot, vehicle mechanic Lance Cpl. Rocky Archer, 20, uses it to light his cigarettes.

Every so often, the AAVs stop and Marines hop out to set up observation posts, vehicle checkpoints or walk a stretch of the highway to clear debris that could disguise roadside bombs.

Twice, Archer has seen a dead dog, veiling a bomb, blow up.