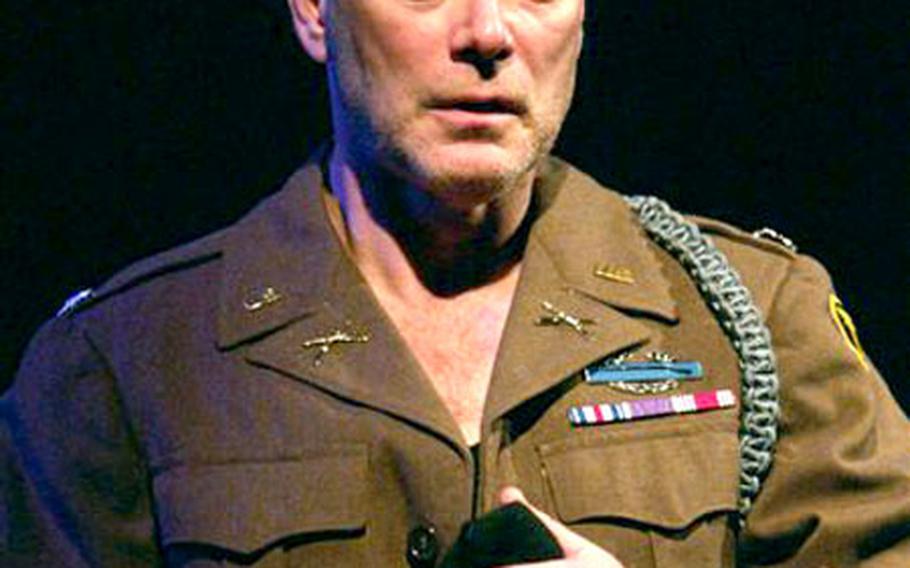 Acclaimed stage and film actor Stephen Lang portrays recipients of the Medal of Honor in the play Beyond Glory. (Diane Williams photo)

In the one-man play &#8220;Beyond Glory,&#8221; which comes to Pacific bases this month, acclaimed actor Stephen Lang brings to life the stories of eight war heroes as adapted from Larry Smith&#8217;s book &#8220;Beyond Glory: Medal of Honor Heroes in Their Own Words.&#8221;

Lang created &#8220;Beyond Glory&#8221; in partnership with the National Endowment for the Arts as part of the organization&#8217;s &#8220;Operation Homecoming: Writing the Wartime Experience&#8221; initiative, which encourages servicemembers to write about and preserve their stories.

&#8220;These men and women offer unique and important voices that enlarge our understanding of the American experience,&#8221; NEA Chairman Dana Gioia wrote about the program on the organization&#8217;s Web site.

Operation Homecoming has enlisted the help of distinguished writers to create writing workshops at military bases to help servicemembers record their experiences.

&#8220;Beyond Glory&#8221; attempts to support that objective by re-creating the first-person accounts of Medal of Honor recipients.

He is also known for his role as Happy in Dustin Hoffman&#8217;s production of &#8220;Death of a Salesman&#8221; and for his title role in the NBC version of the Babe Ruth story.

He comes to Japan Thursday with a performance at the Benny Decker Theater at Yokosuka Naval Base, followed by performances elsewhere in the Pacific. The performances are free and open to anyone on base.

Lang also will lead two Operation Homecoming writing workshops in South Korea this month, at Yongsan Garrison and Osan Air Base, according to the NEA.

Through the initiative, &#8220;Beyond Glory&#8221; will travel to more than 20 bases in the States and overseas this summer for free performances.

For more information, visit the Beyond Glory Web site and Operation Homecoming.

Where to see the play