One last service for WWII flag 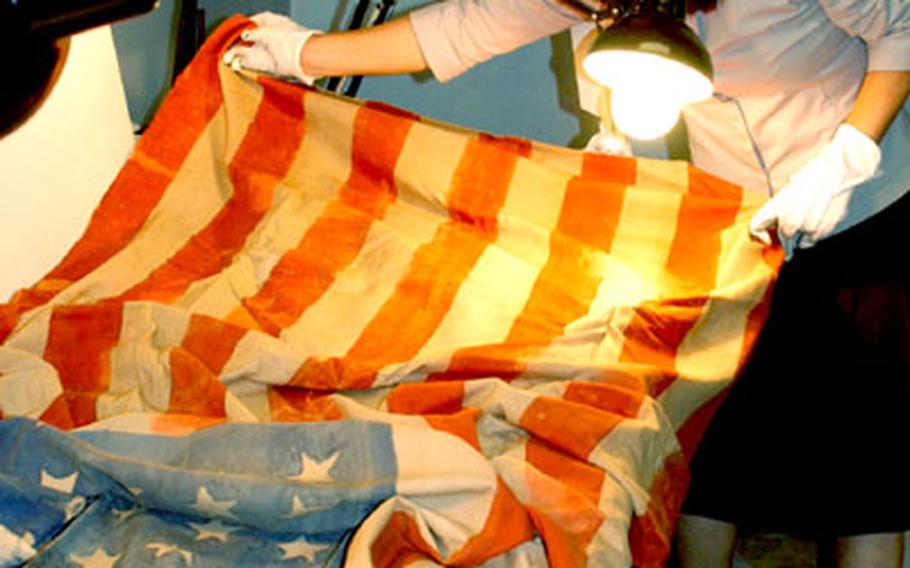 Museum technician Incha Koslosky prepares a U.S. flag used for funerals of Allied POWs during World War II for shipment to Arlington National Cemetery, where it will be used during its owner&#39;s funeral. (Seth Robson / S&S)

Museum technician Incha Koslosky prepares a U.S. flag used for funerals of Allied POWs during World War II for shipment to Arlington National Cemetery, where it will be used during its owner&#39;s funeral. (Seth Robson / S&S) 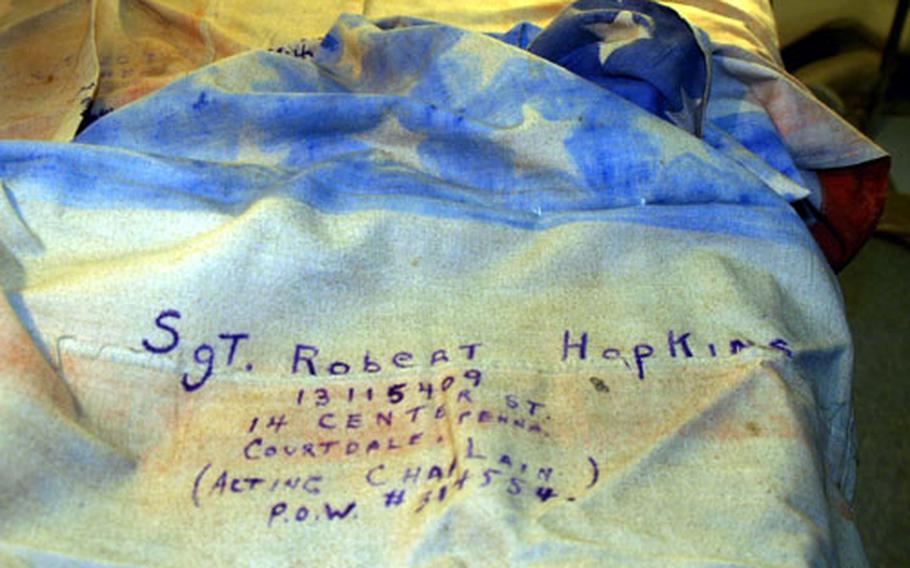 Sgt. Robert Hopkins wrote his name on the back of this U.S. flag, which is colored with the blood of World War II Allied POWs. It will be used at his funeral at Arlington Cemetary next month. (Seth Robson / S&S) 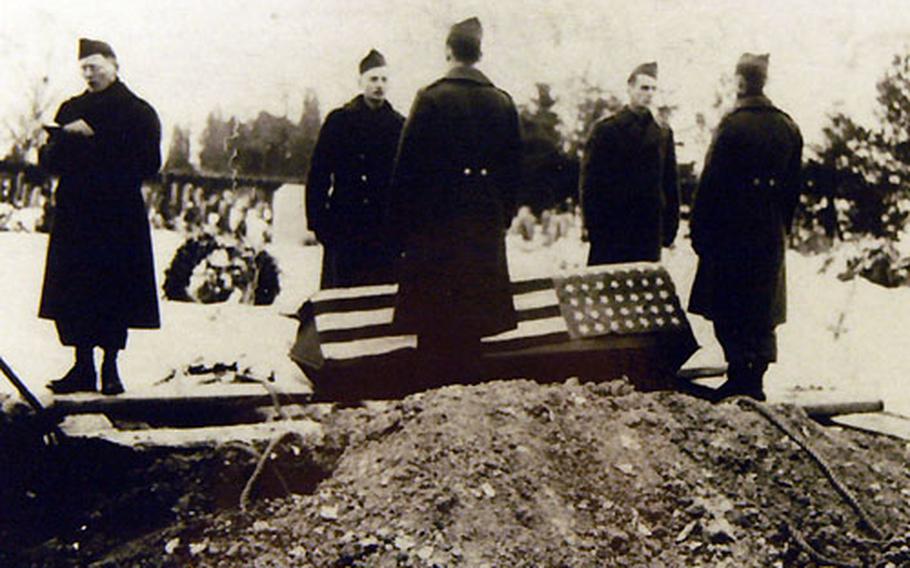 2nd ID enlisted chaplain Sgt. Robert Hopkins presides over the first formal U.S. POW funeral in Germany during World War II. Two of the other soldiers in the picture were shot for refusing to give up the flag and this photograph, which they stole from the Germans. (Seth Robson / S&S)

CAMP RED CLOUD, South Korea &#8212; A flag colored in part with the blood of U.S. prisoners of war and draped over their coffins for funerals at stalags will be used one last time at Arlington National Cemetery next month.

The flag will cover the coffin of its owner, retired Sgt. Robert Hopkins. The former enlisted chaplain from the 38th Field Artillery Battalion, 2nd Infantry Division, used the flag at more than 300 POW funerals during World War II.

It will be transported to the Virginia cemetery from its home at the 2nd ID Museum at Camp Red Cloud, where Hopkins left it in 1979.

Hopkins was captured in the Battle of the Bulge at Krinkelt, Belgium, in December 1944 and forced to march with 2,300 POWs to a stalag, or World War II German prisoner of war camp.

&#8220;Within two weeks of being a prisoner, it was my sad job to bury over 700 American soldiers. Not because they were all worn out. Not because they were ready to die but because somebody didn&#8217;t want them to live. The Germans would shoot them for sport,&#8221; he recalled at the time he donated the flag to the museum.

Hopkins was a POW at Stalag VIIIA near Gorlitz and in January 1945 officiated the first formal military funeral service inside Germany, for American POW Bruce Schalm.

The Germans agreed to allow a flag to be used and for Schalm to be buried in a makeshift casket made of boards bound with wire. Prison corpses were normally stripped and tossed in an open pit, Hopkins said.

It was painted with blue and red dye mixed with blood, he said.

Guards photographed the service for propaganda purposes but POWs stole the photographs. The Germans were furious, Hopkins said.

When Hopkins was transferred to another stalag he took the flag with him. He and other soldiers carried it for more than 2,300 miles all over Germany, he said.

&#8220;The flag was hid so no German could find it. After we left Gorlitz the guards were more tolerable and at times we were permitted to use the flag, then the flag would go into hiding again,&#8221; he said.

Four months later, Hopkins escaped, taking the flag with him. After the war he became a Methodist Minister in Natural Bridge, Va.

After he died earlier this month, his family asked the 2nd ID Museum to loan them the flag for his funeral at Arlington National Cemetery.

The Center for Military History approved the request and the flag is on its way to Arlington. It will return to the 2nd ID Museum after the ceremony, a museum staff member said.

&#8220;We are honoring a member of the greatest generation and this is the least we can do. This guy was a real hero,&#8221; the staff member said.

Hopkins&#8217; son, Norman Hopkins, who served as a U.S. Army sergeant in Vietnam, said his father often told the story of the flag, which sat in a cupboard of their home while he was growing up.

&#8220;When I was young, I used to see the flag and hold it in my hands. Dad would tell me about the British soldiers who got shot because they would not give it up. The flag meant a lot to my dad and it means a lot to me,&#8221; he said.

Norman Hopkins said that although his father was a chaplain, he carried a .45 revolver and a Thompson machine gun during the war.

Hopkins&#8217;s funeral will include an honor guard to fold the flag before its return to the museum, he said.

The British soldier&#8217;s sacrifices for the flag are an example for today&#8217;s soldiers, Norman Hopkins said.

The last time it was used at a funeral, he said, &#8220;was in World War II. I hope&#8230; the alliances we have in Europe and in Asia are as strong as they were during World War II. It doesn&#8217;t matter if it is a South Korean soldier, a French soldier, an Italian soldier or an Australian soldier. The alliance should be there.&#8221;