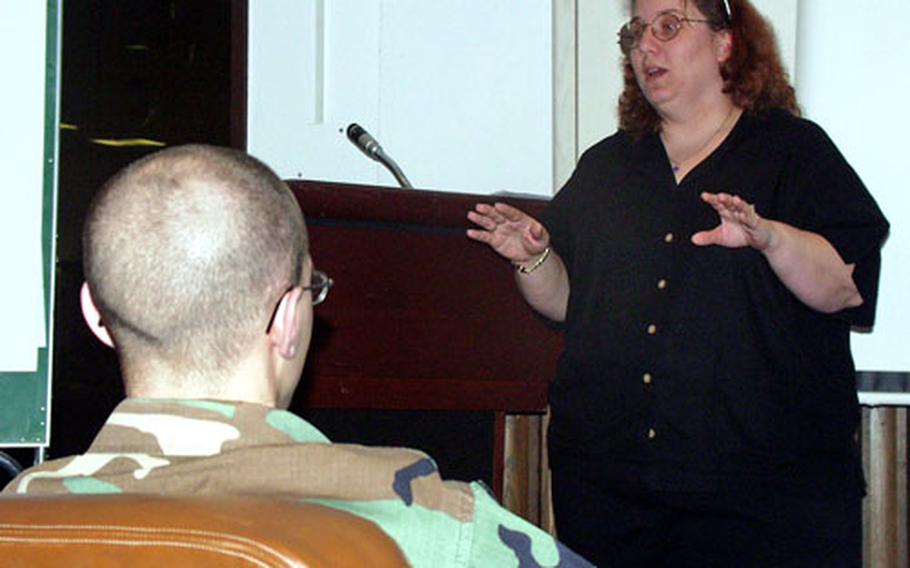 At a one-day conference Friday for single parents, or soon-to-be parents, in the battalion, officials said they are creating a community where going solo doesn&#8217;t mean doing it alone.

The all-day classes, held in the Army Community Service office on Cambrai-Fritsch Casern, stressed the importance of taking time out of the hectic single-parenting lifestyle and then gathering strength from community resources.

&#8220;In the five years I&#8217;ve been a chaplain, I&#8217;ve never seen a conference specifically catering to single soldier parents. There are plenty of married couple communication and parenting classes, but never anything for the single parents,&#8221; said Chaplain (Capt.) Dan Kinjorski of the 32nd Signal Battalion. Kinjorski went to his commander, Lt. Col. William S. Schumaker, last year with the idea to get single soldiers trained in the art of parenting.

The conference brought in counselors from Darmstadt&#8217;s ACS and New Parent Support Program and the Army&#8217;s One Source program.

&#8220;The program today answered some questions I had in my mind if I was doing things right. It&#8217;s also introduced me to things I hadn&#8217;t thought of before,&#8221; said Sgt. Jaime Switras, who has been raising his 3-year-old daughter, Khya Maylove Switras, alone in the past year since he has been back from Iraq.

Switras, who was one of nine single parents in the conference, said he is bringing home effective and healthy ways to discipline his child when necessary.

The conference is giving these single parents the tools they need to be ready, as well as allows them to network with other single parents.

&#8220;There was even another soldier during the conference who offered to help take care of other single soldiers&#8217; children if they needed some alone time or need to get something done,&#8221; she said. This is just another example of how raising a child with only one parent doesn&#8217;t mean raising it alone.