One act plays take the stage at Heidelberg during festival 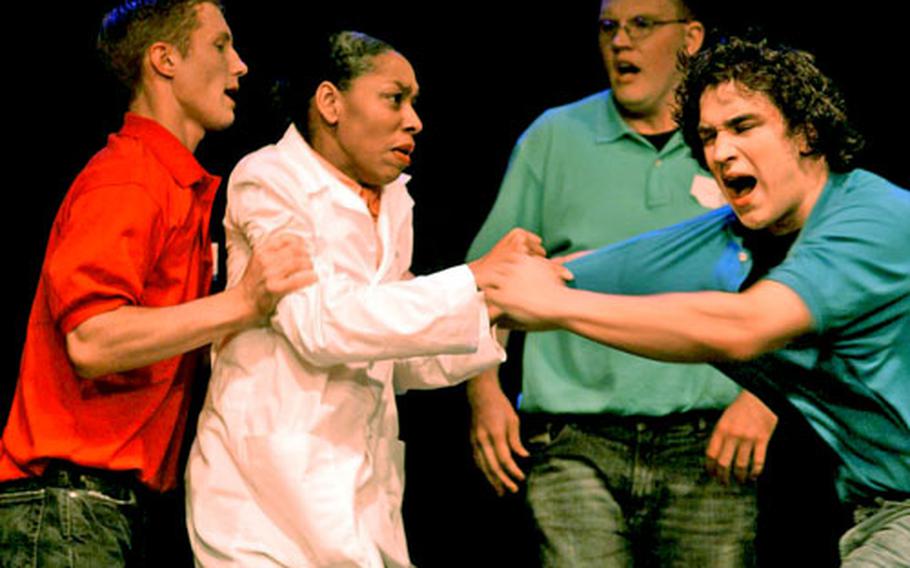 Things turn ugly at the end of the “A Game” at the Festival of One Act Plays in Heidelberg, Germany, on Saturday, as Joshua Keleher, Nicole Chavis, Nicholas Kurtz and Louis Gasper from Aviano’s Community Theatre battle it out. (Raymond T. Conway / S&S)

Things turn ugly at the end of the “A Game” at the Festival of One Act Plays in Heidelberg, Germany, on Saturday, as Joshua Keleher, Nicole Chavis, Nicholas Kurtz and Louis Gasper from Aviano’s Community Theatre battle it out. (Raymond T. Conway / S&S) HEIDELBERG, Germany &#8212; Nearly 20 acting groups converged on Heidelberg this weekend for a festival of short dramas, comedies and musicals.

The annual Festival of One Act Plays, held at the Patton Barracks Roadside Theater Playhouse, began Thursday. The event, which wraps up Sunday with workshops and a professional performance, is an opportunity for actors and directors to hone their talents, attend workshops and receive constructive criticism from a panel of judges, according to Jim Sohre, U.S. Army Europe entertainment director and producer of the festival.

The festival was established 10 years ago as a way for directors and beginning actors to polish their work through stage performances, Sohre said.

After each performance, the one-act plays were openly critiqued by three international professional theater judges, who later offer workshops in acting, music and directing.

This year, there&#8217;s a little more riding on the festival. The best one-act play will compete in the Region 10 entry in the American Association of Community Theater National Festival, Sohre said.

That doesn&#8217;t mean actors are cut-throat in trying to win their region and move on to the national festival, Sohre said.

&#8220;Although awards are given, this just recognizes different actors for different things. This is not a competition. Everyone participating is jazzed to network with and support each other,&#8221; Sohre said. &#8220;It&#8217;s a great experience for them to do their own show, as well as see so many different types of shows.&#8221;

Byron Wilkinson, 56, of Heidelberg, who played an 8-year-old boy in the one-act play &#8220;Suburb,&#8221; agreed, saying the festival acts as a sounding board for the entire European theater community.

&#8220;The main point is that actors get a fair assessment of their performance by professionals and learn where they need improvement,&#8221; Wilkinson said, who has been acting for less than two years. &#8220;This is great, especially for young people. It helps build self-confidence that they will use throughout their life time.&#8221;

Though the festival is a lot of hard work for actors and directors, with work beginning in the summer and culminating in early October, participants said it&#8217;s a labor of love.