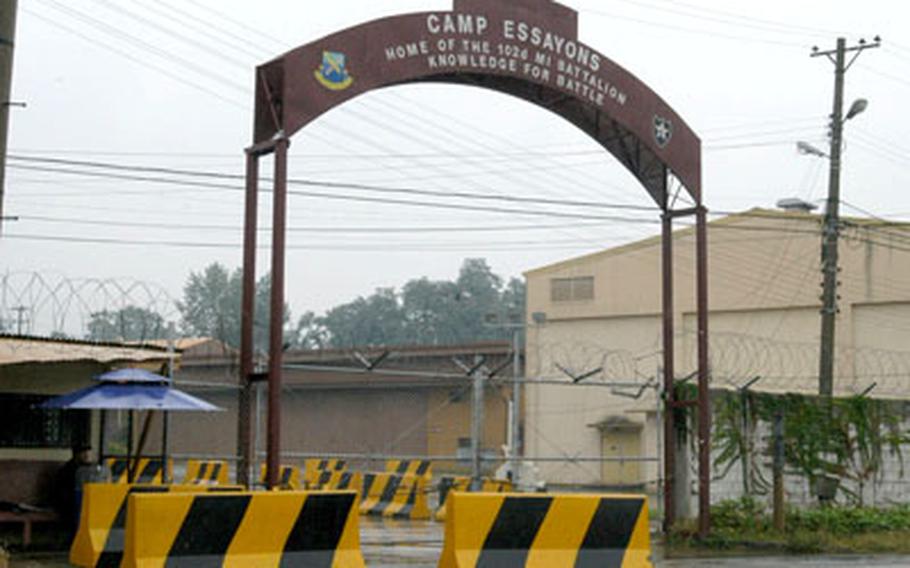 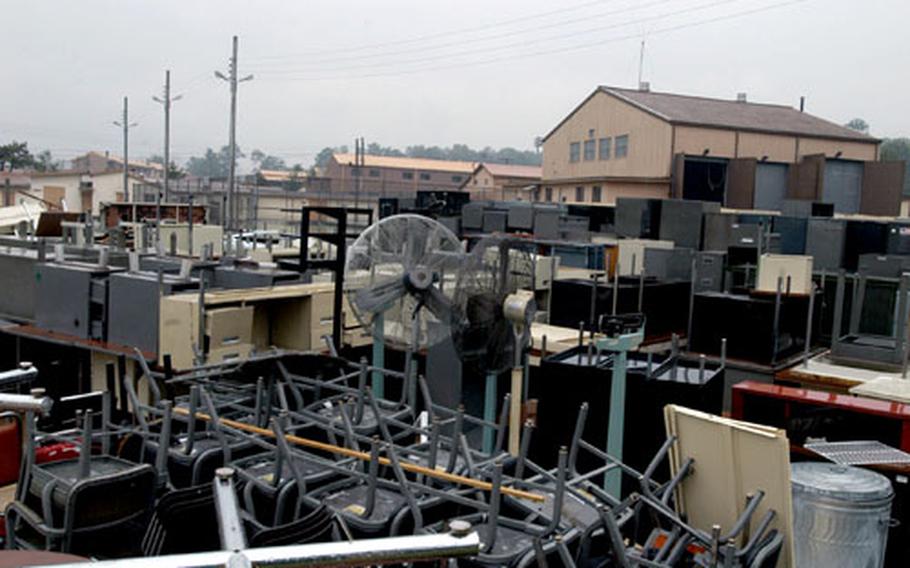 Editor&#8217;s Note: A clarification regarding this article was published Oct. 17.

CAMP ESSAYONS, South Korea &#8212; The 2nd Infantry Division has vacated this facility and this month will leave another nearby base &#8212; Camp Kyle, in Uijeongbu City, officials said.

The division&#8217;s Special Troops Battalion commander, Lt. Col. Bridget Rourke, said the last troops left Essayons at the end of September. Closing ceremonies for the nearby camps Sears and Kyle will be held Oct. 12 and 25, respectively, Area I officials said.

On Friday, dozens of buildings, many of them Quonset huts, sat empty at Essayons. Thousands of pieces of furniture, appliances and equipment &#8212; including items from the troop medical center &#8212; sat in the rain at one of the motor pools.

Rourke, who spent a year at Essayons as commander of the recently inactivated 102nd Military Intelligence Battalion, said the installation had a full range of facilities including a large gymnasium, library, outdoor swimming pool, theater, shoppette, baseball diamond and tennis courts. The only things it lacked were a commissary and an arts and crafts center, she said.

The 600 soldiers from the 102nd who served there maintained high-tech intelligence equipment and vehicles and provided signal and imagery analysis for 2nd ID, she said.

Rourke&#8217;s fondest memories of her time at the camp are of running up Chunbo Ridge, the steep hill behind the facility. She has decorated the computer screen in her new office at Camp Red Cloud with a photo of herself and other 102nd soldiers standing on the hill with Camp Essayons in the background.

One of the most exciting things to happen at the facility last year was when 102nd&#8217;s security company created an urban assault course at the back of the base so soldiers could practice urban combat there, she said.

Many 102nd soldiers have joined the Special Troops Battalion at Camp Red Cloud and the unit has maintained a relationship, started by the 102nd, with the Young-a-Won orphanage in Uijeongbu, Rourke said.

Sgt. Nicholas Fennell, 26, of McComb, Miss., spent two years with the 102nd at Camp Essayons before joining the battalion at Camp Red Cloud. His strongest memories of his time at Camp Essayons were of organizational days, when the small community would come together to throw pies in officers&#8217; and senior non-commissioned officers&#8217; faces.

McComb also has fond memories of the Stalkers Club at Essayons, which featured a few slot machines, a pool table, bar and dance floor.