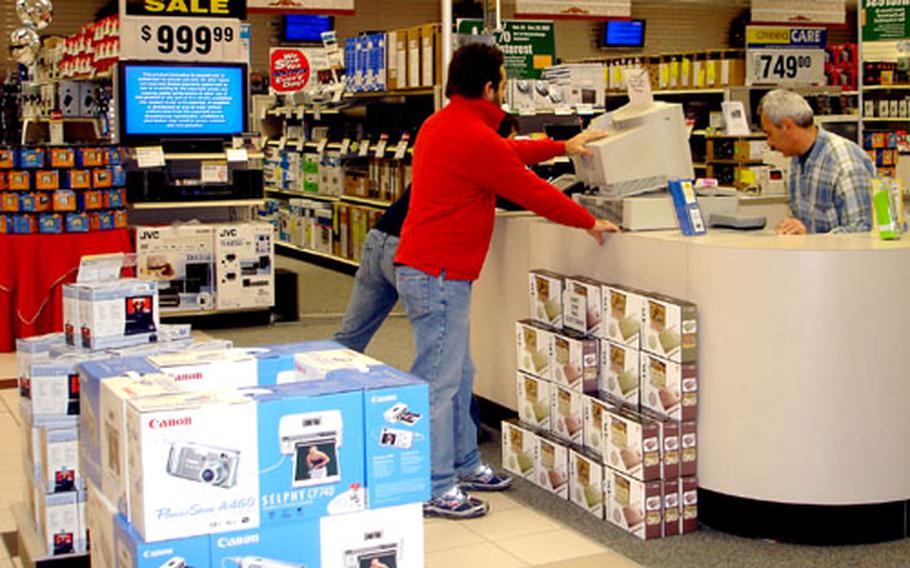 Workers at the Navy Exchange in Naples make last-minute preparations for the hundreds of customers who filed into the store for the start of the holiday shopping season. (Lisa M. Novak / S&S)

Workers at the Navy Exchange in Naples make last-minute preparations for the hundreds of customers who filed into the store for the start of the holiday shopping season. (Lisa M. Novak / S&S) 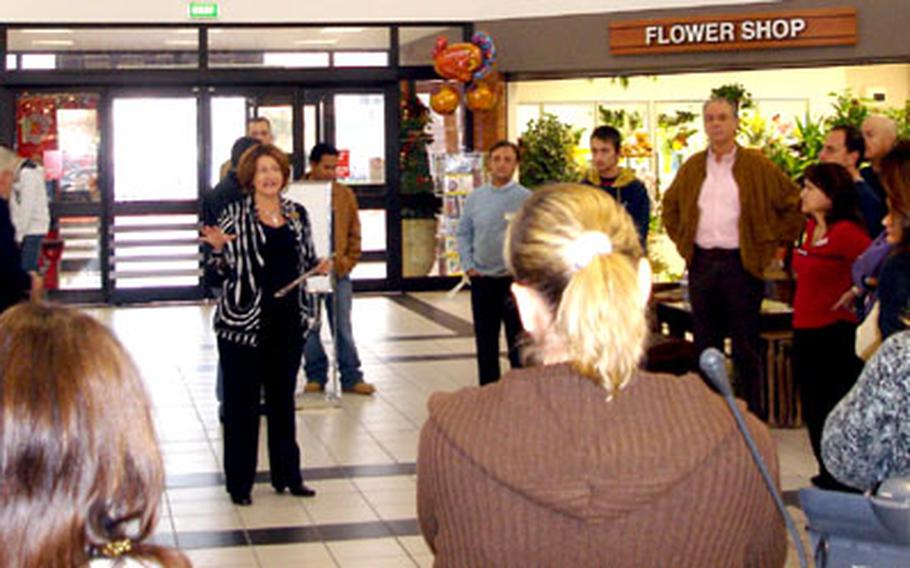 Naples Navy Exchange General Manager Christina Giordano briefs her sales staff before the doors opened to customers for the start of the holiday shopping season the day after Thanksgiving. (Lisa M. Novak / S&S) 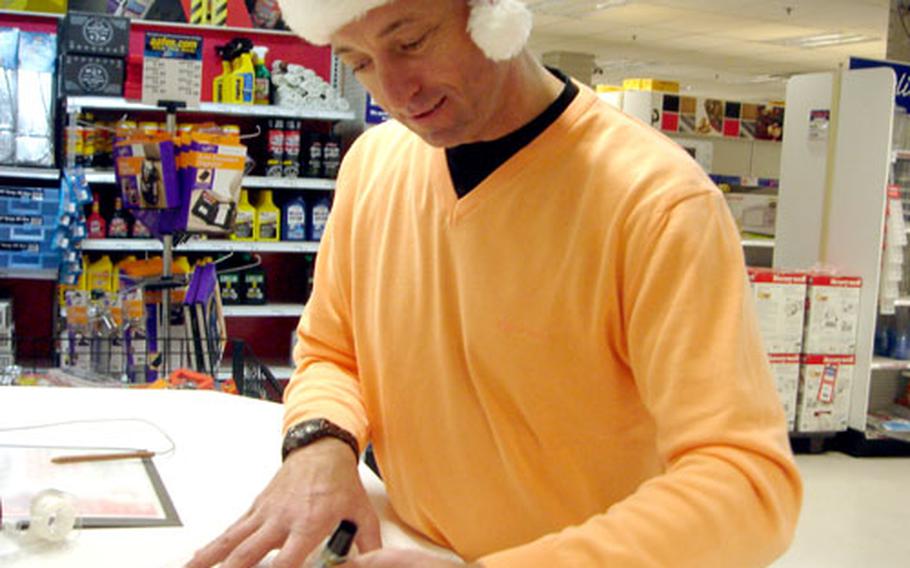 Senior Master Sgt. Mark Knapp, with U.S. Air Forces in Europe headquarters at Ramstein Air Base, makes an impromptu sign for a gift-wrapping booth he helped man Friday at the Vogelweh BX in Kaiserslautern, Germany. Knapp got some holiday shopping done before and after he volunteered. (Charlie Reed / S&S) 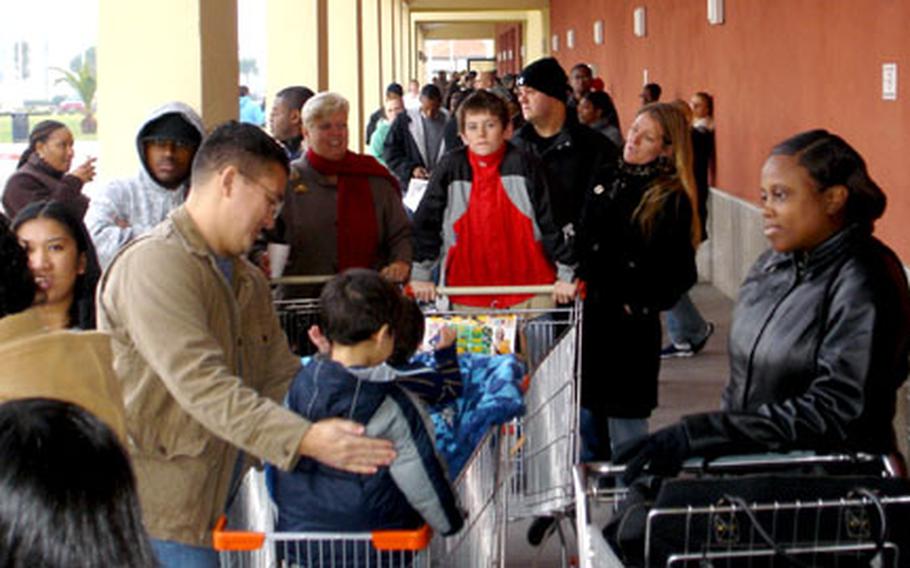 Shoppers line up outside the Navy Exchange in Naples at the Support Site in Gricignano for the start of the holiday shopping season. (Lisa M. Novak / S&S) 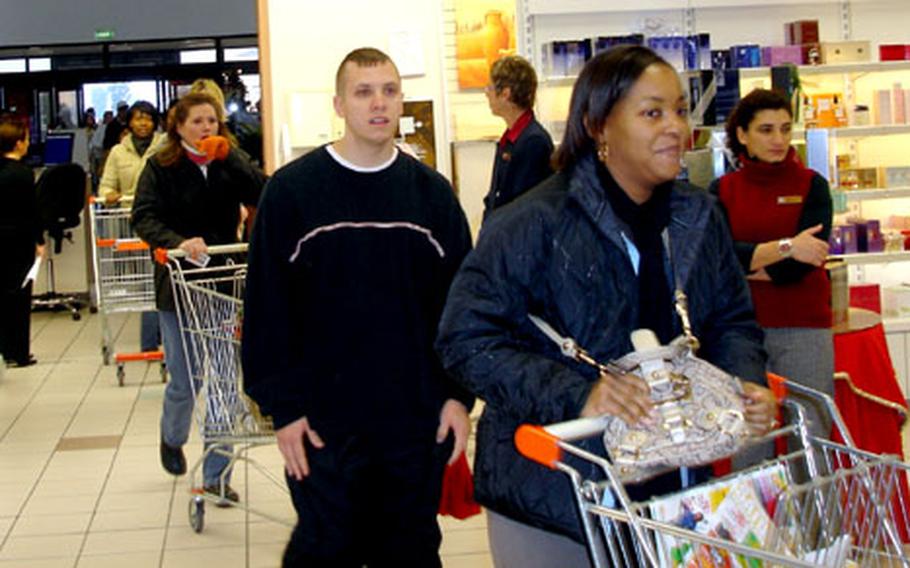 Shoppers quickly file into the Navy Exchange in Naples for the start of the holiday shopping season. (Lisa M. Novak / S&S)

Forget turkey and forget football. Friday&#8217;s kickoff was for the start of the holiday shopping season, and bargain hunters turned out in droves.

Store hours at military exchanges throughout Europe were extended, though shoppers eager for the best deals started lining up well before sunrise.

The line to get into the Power Zone at the Air Force&#8217;s Vogelweh installation in Kaiserslautern, Germany, already was snaking around the building when assistant store manager Wenzel Pruitt arrived at 5 a.m.

Most were there for the big sales on laptops and printers, which sold out five minutes after the store opened at 8 a.m., he said. &#8220;With all the rebates, the printer was free.&#8221;

Though many were buying gifts for others, some, like Airman 1st Class William Michaels with the 435th Munitions Squadron at Ramstein Air Base, braved the crowds to get a deal for himself.

But not everyone was convinced the savings were worth the trouble.

For others, Friday was about more than shopping. It marked the beginning of the holiday season.

Donning a Santa hat, Knapp got his shopping done before and after volunteering to wrap presents at a booth in the Vogelweh food court.

Customers waiting to get into the Naval Exchange at the support site in Gricignano, in Naples, Italy, got a little holiday cheer when employees served them coffee and hot cocoa in the wee hours before the store opened.

Not only did the line of customers snake outside the building, cars waiting to get on base were backed up for nearly a quarter mile about 7:30 a.m.

But the much sought-after Nintendo gaming system will be hard to find this holiday season.

Though merchandise will continue to pour into military exchanges between now and Christmas, Konop suggests logging on to AAFES.com to buy things that can&#8217;t be found locally.

Though she purchased a few things the old-fashioned way Friday for her children and her husband in Afghanistan, people like Ramstein resident Beth Parker say shopping online is more convenient and more comfortable.