On the way to being an enduring base 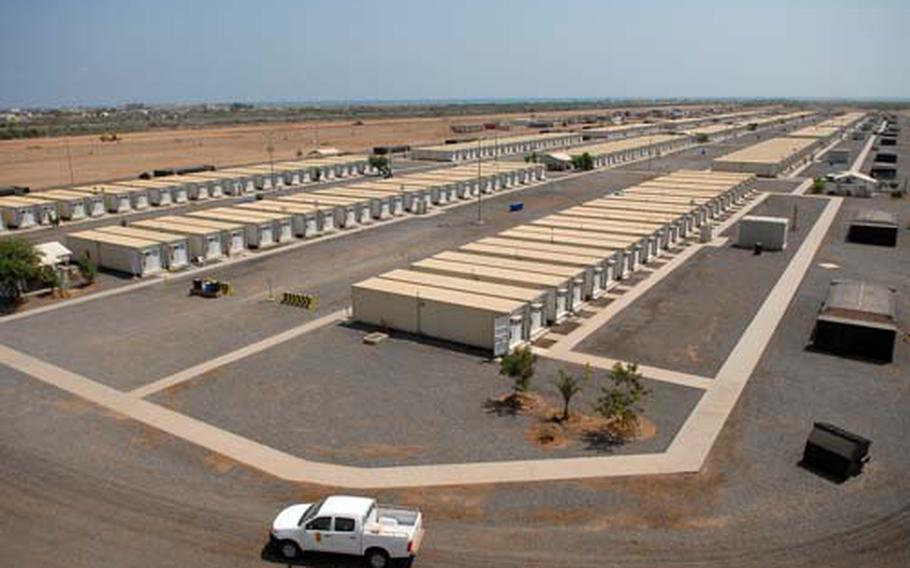 Rows of containerized living units, or CLUs, stretch into the distance March 15 at Camp Lemonier, Djibouti. Troops assigned to the camp lived in climate-controlled tents until workers installed the CLUs, but leaders are already discussing the possibility of building permanent barracks. (James Warden / S&S)

Rows of containerized living units, or CLUs, stretch into the distance March 15 at Camp Lemonier, Djibouti. Troops assigned to the camp lived in climate-controlled tents until workers installed the CLUs, but leaders are already discussing the possibility of building permanent barracks. (James Warden / S&S) 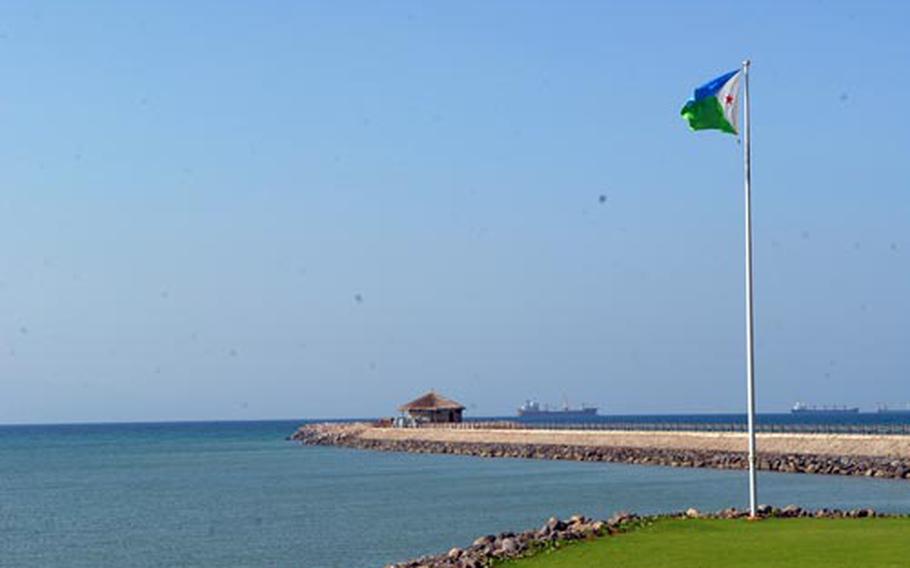 The Djiboutian flag flies March 15 outside the Kempinski Palace, a downtown Djibouti luxury hotel, while cargo ships pass through the harbor. Djibouti’s port makes it an important part of the Horn of African region for both civilian vessels and Navy ships that need repairs or resupply. (James Warden / S&S) 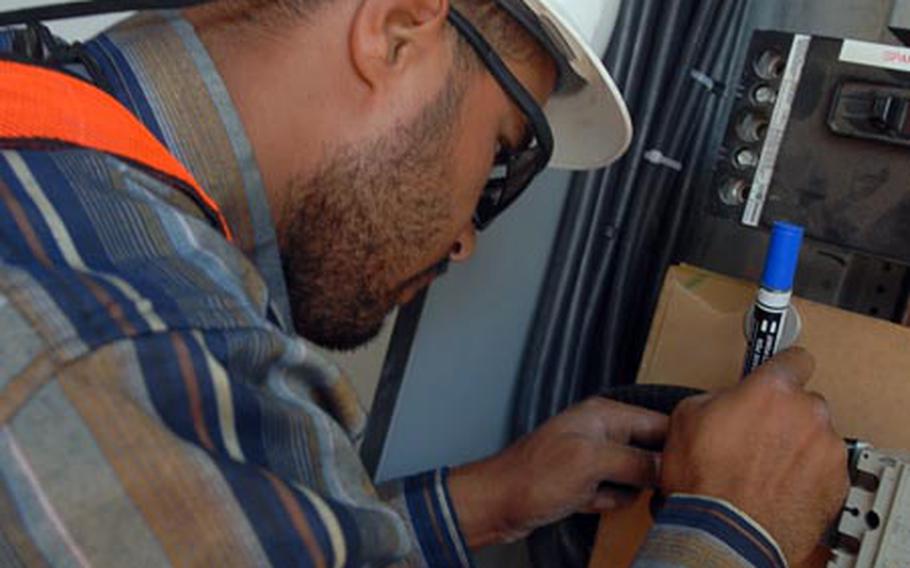 Mohammad Addi works on an electrical box on March 15 at Camp Lemonier, Djibouti. Electrical projects that now allow the camp to provide its own power were an essential step for the camp’s growth toward being a key installation. (James Warden / S&S) 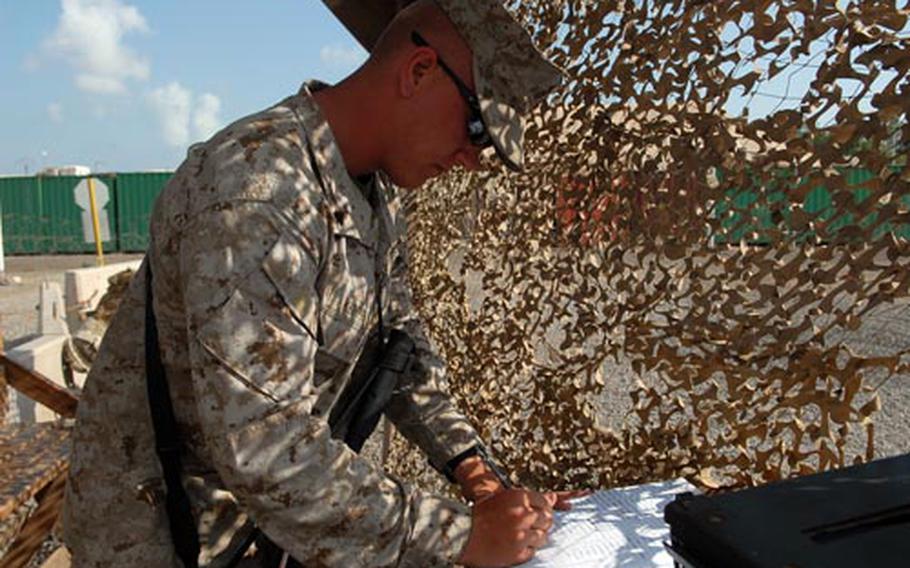 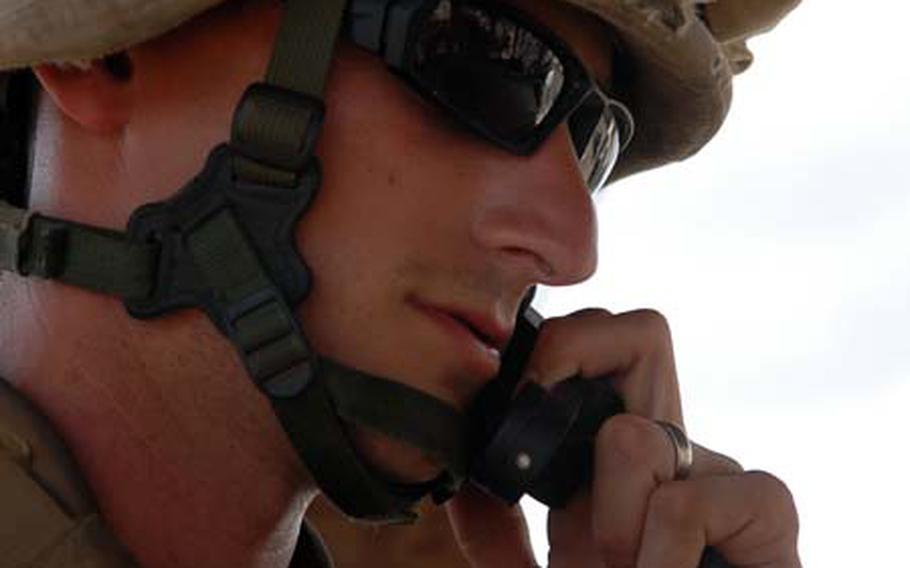 Marine Cpl. Jordan Freybler, a fire team leader, answers a radio call while on guard duty March 20 at Camp Lemonier, Djibouti. The creation of U.S. Africa Command has led the base to become a key installation for areas beyond the Horn of Africa region where it sits. (James Warden / S&S)

CAMP LEMONIER, Djibouti - There&#8217;s a wonderful view of Camp Lemonier from a lofty watch tower smack in the middle of the base. In one direction, you can see row after row of housing units stretching into the distance. In another, you can see neighboring Djibouti International Airport. The tower is so tall that a keen-eyed spotter can see all the way to the beach that marks the post&#8217;s boundary.

This tower in the center of Lemonier was once actually near the edge of the camp. Increasing American activity in the Horn of Africa has propelled Lemonier from a sleepy 97-acre post to a 500-acre base that&#8217;s become one of the military&#8217;s major installations on the continent. Last year&#8217;s stand-up of U.S. Africa Command means the base is only going to get busier.

"As AFRICOM matures, Camp Lemonier will transition to supporting long-term [theater security cooperation] efforts and establishing strong and enduring regional relationships," Gen. William "Kip" Ward, the AFRICOM commander, said during testimony to the House Armed Services Committee in March 2008. "Camp Lemonier will be a part of supporting and developing regional African capability and capacity; thus, its funding support must continue."

Chaplain (Lt. Cmdr.) Bob Cain remembers when Lemonier was a small camp during his first deployment there from May 2006 to March 2007. Back then, there were few permanent buildings aside from staff buildings dubbed the Horseshoe and Whitehouse, Cain said. People mostly lived in tents, although containerized housing started to arrive at the end of his tour.

In those days, Lemonier ended where an enclosed, air-conditioned cantina called 11 Degrees North is now an evening hot spot for those looking to enjoy the three beers they&#8217;re allowed each day. By contrast, the cantina during Cain&#8217;s first tour was an open building with pool tables.

"It was pretty rustic back then," Cain said.

Motsko noted that these permanent buildings will have to be used for five or 10 years to see efficiencies over the temporary buildings that now dominate Lemonier, a sign that the camp isn&#8217;t going anywhere anytime soon.

"With a little bit of effort and a desire for it to be enduring, it definitely could be," Motsko said. "I think the writing&#8217;s on the wall."

But the most telling indicators of the camp&#8217;s larger role may be the new infrastructure that will allow it to serve as a support hub for Africa Command. Crews have already broken ground on new taxiways to increase its ability to manage aircraft. Leaders are considering putting in a "hot pad" that will allow planes to refuel, rearm and get back on their way quickly.

Lemonier is now set to be an enduring base of operations for Africa Command. Navy Capt. Patrick Gibbons, the base commander, envisions the camp as a forward staging base for troops making last minute preparations before a mission. It is already a logistics hub that supports ships working in the Gulf of Aden and aircraft flying counterpiracy missions there. Other teams are tasked to pick up anyone who needs to be rescued. Lemonier&#8217;s mission even extends beyond the Horn of Africa region where Djibouti lies.

"The camp is becoming an enduring mission," said Rear Adm. Anthony Kurta, commander of Combined Joint Task Force-Horn of Africa, the command responsible for this part of Africa. "It is in some ways larger than CJTF-HOA."