On the menu: Instant energy in gel, gum 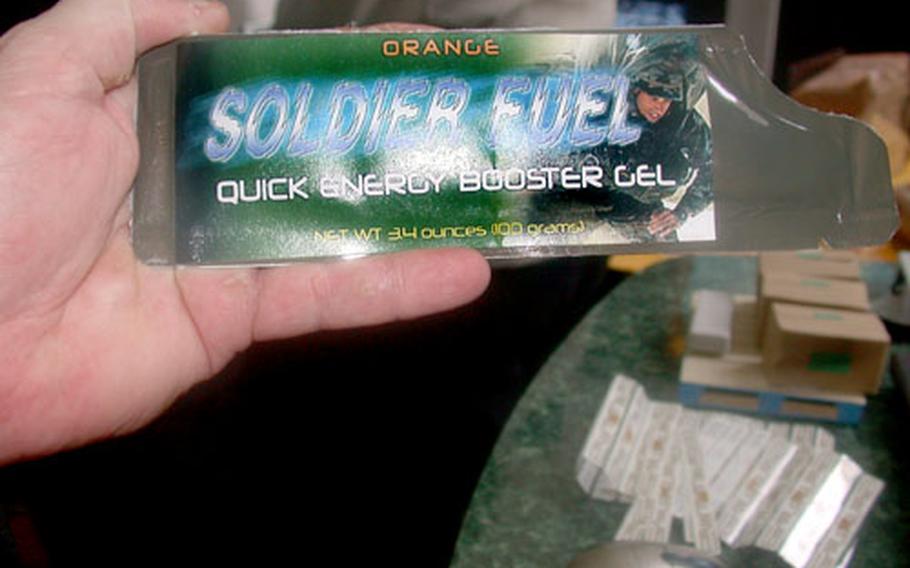 A new energy gel, similar to the gels first popular among runners, is one of the Combat Feeding Directorate&#39;s "nutraceuticals." High in carbohydrates, which provide immediate fuel for the body, the gel will be included in the "First Strike" combat rations that are due to be fielded in 2008. (Lisa Burgess / S&S)

A hybrid of the words &#8220;nutrition&#8221; and &#8220;pharmaceuticals,&#8221; nutraceuticals are defined as any extract, from plant or animal material, that has health-related benefits beyond those obtained by normal nutritional means, according to the National Institutes of Health

In the future, the U.S. Army Soldier Systems Center in Natick, Mass., might field a pill that a soldier would pop &#8220;instead of a turkey dinner,&#8221; or a patch that would stay on a soldier&#8217;s skin for days, all the time delivering microdoses of highly concentrated nutrients, Combat Feeding leader Gerald Darsch said in a Thursday interview on Capitol Hill.

But for now, Natick has turned to the commercial world to produce its first two nutraceuticals: an energy gel similar to the ones popular among runners and a caffeinated chewing gum.

The gel, which actually has the consistency of a light cake frosting rather than sticky syrup, is high in carbohydrates and glucose, which provide immediate fuel for the body. Packaged in a lightweight pouch, the gel can be consumed on the move, Darsch said.

The energy gel will be included in the First Strike combat rations due to be fielded in 2008, and depending on its popularity, may be considered for inclusion in regular MREs or as a supplemental item, Darsch said.

The Marine Corps asked Natick to provide samples of the gel for Marines to try while deployed to Afghanistan and have been so impressed that service leaders &#8220;have now committed to buy&#8221; it in bulk, Darsch said. Funding has yet to be secured, however.

The second is Stay Alert Caffeine Gum, a cinnamon-flavored chew that delivers 100 milligrams of caffeine per piece &#8212; roughly equivalent to a cup of brewed coffee, which ranges from 80 to 135 mg.

Stay Alert is produced by Amurol Confections, which introduced a 50-milligram-per-stick gum in 1998.

Commercial versions of caffeine gum are readily available, but most offer considerably less punch. Jolt gum has 40 mg of caffeine, or less than half of Stay Alert, while Black Black, a Japanese brand, has just 10 mg of caffeine per stick.

Stay Alert is so powerful that package directions warn against chewing more than three pieces in three hours, or 10 sticks per day.

Like the energy gel, the five-stick packs of Stay Alert will be included in the First Strike combat rations.