On the hunt for weapons ... and allies 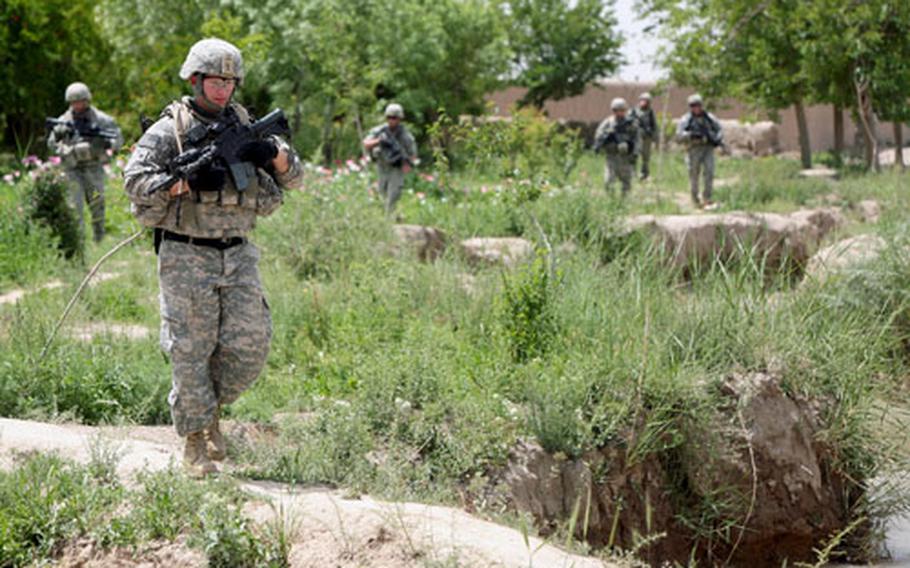 Sgt. Randall Munib, 26, of Glendale, Ariz., and other soldiers from Company A, 2nd Battalion, 2nd Infantry Regiment head out on patrol toward the village of Mira Hor, Kandahar province, Afghanistan, after receiving a tip about the location of a Taliban explosives cache. (Drew Brown / S&S)

Sgt. Randall Munib, 26, of Glendale, Ariz., and other soldiers from Company A, 2nd Battalion, 2nd Infantry Regiment head out on patrol toward the village of Mira Hor, Kandahar province, Afghanistan, after receiving a tip about the location of a Taliban explosives cache. (Drew Brown / S&S) Afghan police officers haul away an estimated 80 pounds of TNT explosives discovered by U.S. troops from Company A, 2nd Battalion, 2nd Infantry Regiment in Mira Hor. The soldiers had been tipped to the location of a recently-buried Taliban explosive cache, which contained the TNT, about 10 gallons of homemade explosives and a half-dozen rounds each of recoilless rifle ammunition and rocket-propelled grenades. (Drew Brown / S&S) 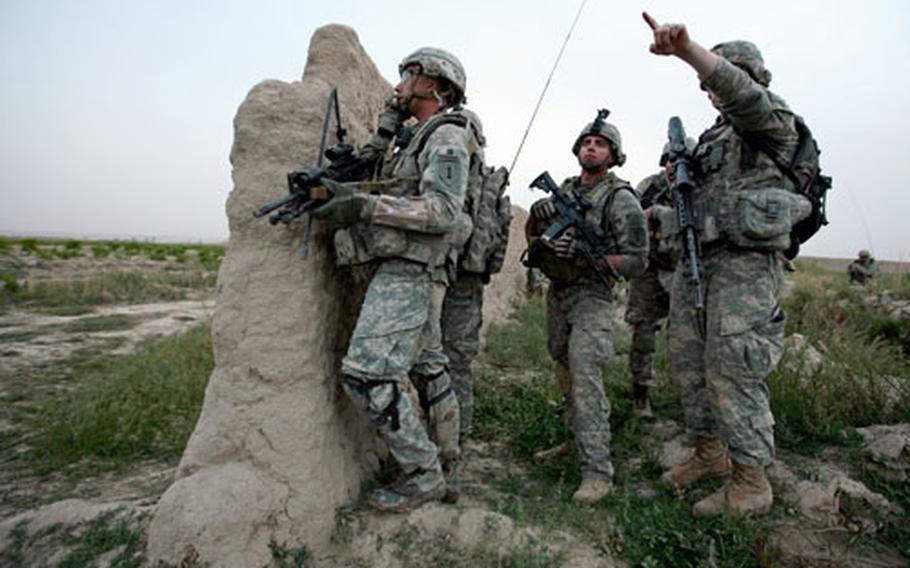 A soldier with Company A, 2nd Battalion, 2nd Infantry Regiment points out the location of a possible gunman after Taliban fighters attacked their patrol near Mira Hor. (Drew Brown / S&S) A 500-pound bomb dropped from a B-1 bomber lights up the night horizon near Mira Hor. U.S. soldiers with Company A, 2nd Battalion, 2nd Infantry Regiment, called in the airstrike after being ambushed twice by Taliban fighters as they were leaving the village, where they had found and destroyed a cache of explosives. (Drew Brown / S&S)

MIRA HOR, Afghanistan &#8212; An informant showed up at the government center in Maiwand district last week claiming to know where Taliban fighters had buried a cache of weapons.

A hidden cache in this tiny farming village, about 25 kilometers west of the provincial capital of Kandahar, wouldn&#8217;t be unusual; Taliban fighters and sympathizers are plentiful in the area. But it was out of the ordinary that someone had stepped forward willingly and tipped American troops to the site.

So last Saturday, soldiers from Company A, 2nd Battalion, 2nd Infantry Regiment set out from their camp and headed east. At a certain point, they stopped in the desert and left a rear guard with their vehicles. About 40 Americans and 10 Afghans set off on foot for Mira Hor.

They arrived in the village about three hours later. An Air Force bomb disposal team uncovered two five-gallon jugs of homemade explosives, a half-dozen rounds each of rocket-propelled grenades and recoilless rifle ammunition, and more than 80 pounds of TNT buried among rows of tangled grapevines.

The team gathered the stuff in a pile in a field of pink opium poppy and blew it up. The find wasn&#8217;t particularly large, but it contained enough material for at least one bomb that in all likelihood would&#8217;ve been used against American troops. The mission was a modest success against the Taliban. Still, in many ways, it had only begun.

"Now, it&#8217;s just getting out of here without getting blown up," said Capt. Chris Brawley, 28, of Ellington, Mo., the Company A commander.

The troops would be lucky if they made it out without being attacked. The Taliban tend to lay in mines or hit them with rifle and machine-gun fire at the end of the day, said Spc. Andrew Gardiner, 29, of Gloucester, Va., Brawley&#8217;s radioman.

It was past 5 p.m. The soldiers had been on patrol since around 10 that morning.

Although the temperature had only hit the low 90s, it had been one of the hottest days of the year so far. With body armor, helmets, weapons and ammunition alone, the soldiers were lugging 80 to 100 pounds of gear each, and the heat had already taken its toll. Two soldiers had been taken out on a medical evacuation chopper because of heat exhaustion.

The Americans started back to their trucks shortly before sunset. They were about a kilometer out of the village when the Taliban struck the first time. The quick pop-pop-pop of AK-47 shots rang out from behind the column.

More quick bursts came from the north, the rounds whizzing overhead. The soldiers scrambled for cover, and some began to return fire. But with the Afghans shooting in all directions in what the Americans refer to as a "death blossom," it was difficult to determine exactly where the enemy fire stopped and the friendly fire began.

Red and green tracers burned through the darkening sky. The loud thump of mortars sounded from the rear.

Brawley stood, peering over the top, calling in the approximate location of the contact to higher command. A soldier opened fire on a group of dark figures moving through a wheat field to the north until he was told they were friendlies.

The Taliban attack stopped just as suddenly as it had started. The Americans say that unless the fighters have superior numbers &#8212; which they haven&#8217;t yet in this area &#8212; they&#8217;re smart enough to limit their attacks to 15 minutes or less. They&#8217;ve learned the hard way that one of the first things the Americans do when they come under fire is to call for air support, with NATO jets and helicopters arriving soon after.

The patrol continued, and an inky darkness soon descended. The Taliban struck again just as night fell, this time from the south. A sharp, staccato burst of rifle fire rang out, followed by mortars. But the Taliban fire was wildly inaccurate, and it was unclear where any of it hit.

The Afghan police responded again with a "death blossom," more or less oriented in the right direction this time. The Americans sent up a wall of red tracers. Rocket-propelled grenades fired by the Afghans roared and crashed. Then someone shouted "Cease fire! Cease fire!"

The exchange had lasted less than a minute.

Brawley called for an airstrike; otherwise, the harassing attacks might go on all night. A set of grid coordinates was soon worked up. A B-1 bomber the soldiers called "Bone" was circling far overhead. A voice from the aircraft came on the radio to say they would put a bomb on target during the next pass.

The aircraft circled wide, then came back in. There was a tremendous whistling screech, then an enormous fireball lit up the southwest horizon. "Bone" had dropped a 500-pound GPS-guided bomb on the mortar team&#8217;s suspected location. The bomb appeared to have made a direct hit.

The Afghans shouted and cheered, and the Americans joined in, with a few choice expletives. "Bone" made a second pass and dropped another bomb on a different site, apparently just for good measure.

Brawley received a short video clip of the bomb drop the next day. The first bomb had made a direct hit on the suspected mortar team. Three people were reported killed and two others wounded.

The shooting was over for the night. But a long slog back to the trucks still lay ahead. The Americans and the Afghans spent hours plodding through muddy, water-logged fields of wheat and opium poppy. The stuff reached up to their chests.

There was no moon, and they crossed irrigation ditches in the pitch dark. Even with night vision devices, it was tough going, the hours piling on as faint glows from the trucks&#8217; infrared beacons danced like ghosts in the distance.

Nearly everyone was soon out of the water. More soldiers collapsed from heat exhaustion. Medics administered bags of intravenous solution to get the men on their feet and moving again.

There would be no more choppers coming. Quiet curses filled the night as other soldiers took the body armor, helmets and weapons of the men who&#8217;d gone down. With the additional gear, some of them were probably carrying 150 pounds.

They reached the trucks around 10 p.m. They sucked down bottles of water and Gatorade passed to them from the trucks. A quick head count ensured everyone was accounted for, along with their gear.

By the time they made it back to the camp, it was nearly midnight.