On Pearl Harbor, history a matter of perspective for Japan, US 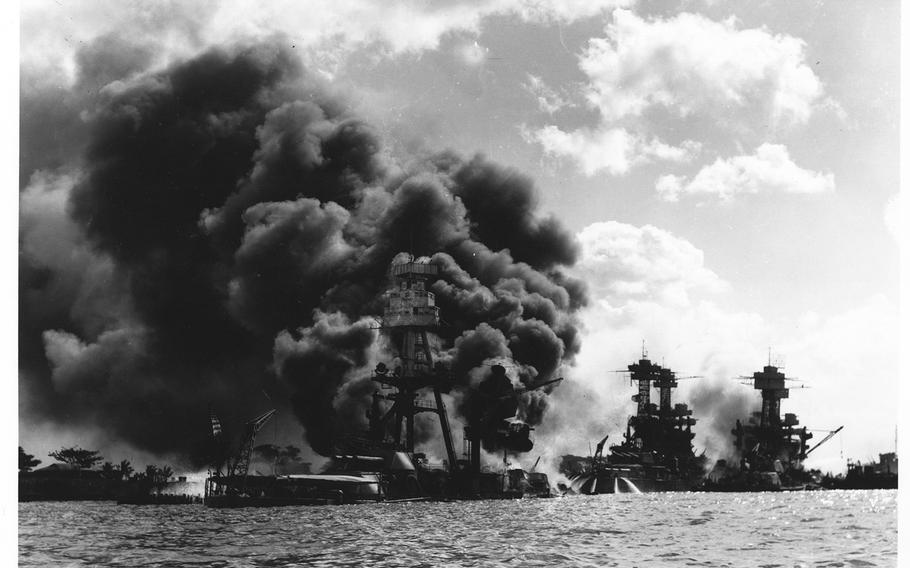 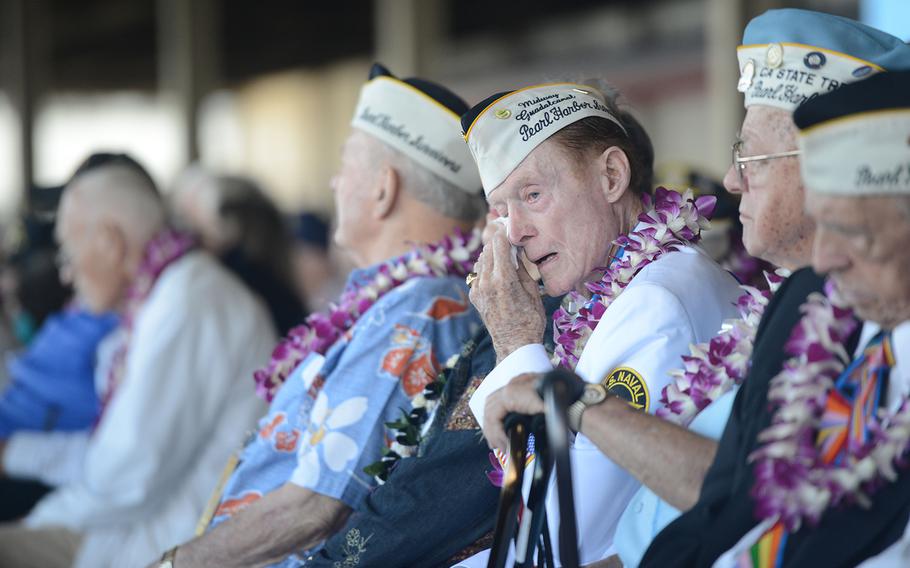 A Pearl Harbor survivor wipes tears from his eyes during the 75th Commemoration of the attack on Pearl Harbor at Kilo Pier on Joint Base Pearl Harbor-Hickam, on Dec. 7, 2016. (Tara Molle/U.S. Coast Guard)

TOKYO — The Pearl Harbor attack that led the United States into WWII is normally a historical footnote in Japan, rarely discussed on anniversaries or in depth at schools.

That changed when Prime Minister Shinzo Abe announced he would visit Pearl Harbor with President Barack Obama on Dec. 27 to offer “comfort to the souls of the victims.”

Most Japanese today view the war as a great folly. The clause in Japan’s constitution that renounces the nation’s right to wage war has taken root so deeply that even new, restrictive laws allowing Japan to defend its allies were viewed with suspicion last year.

However, some divergent perspectives over history remain among two of the world’s closest allies.

Americans are taught that the Dec. 7, 1941, attack on Pearl Harbor was an unprovoked sneak attack.

The view among some Japanese, and particularly among some otherwise pro-U.S. alliance conservatives, is that a Western economic embargo forced Japan’s hand.

By 1941, Japan controlled large parts of China and other parts of Asia. In July, its military occupied parts of Southeast Asia, including a key port in what is now Vietnam.

The U.S., Britain and The Netherlands responded by freezing Japanese assets in their countries, which included access to most of Japan’s oil supply.

“Indeed, the oil embargo cornered Japan,” Emperor Hirohito said in an audio memoir recorded shortly after the 1945 surrender. The memoir was found in 1990 by the Bungei Shunju magazine and then translated by The New York Times.

“Once the situation had come to this point, it was natural that advocacy for going to war became predominant,” Hirohito said. “If, at that time, I suppressed opinions in favor of war, public opinion would have certainly surged, with people asking questions about why Japan should surrender so easily when it had a highly efficient army and navy, well trained over the years.”

The militaristic Japan of the 1930s viewed colonialism as a way out of the economic woes of the Great Depression. Its leaders saw condemnations of land grabs within China and elsewhere as selfish, in light of the West’s holdings in Asia.

“The attack at Pearl Harbor was not only a war against the United States, but it was part of conflicts over colonies and expansionism in Asia,” said Yujin Yaguchi, professor of American Studies at the University of Tokyo and author of “Talk About Pearl Harbor: Its History, Memories and Education.”

Most in Japan have since renounced Japan’s colonial push. Abe told the world last year during the 70th anniversary of the war’s end that in its 1930s adventurism, Japan had “lost sight of the overall trends in the world.”

“Upon the innocent people did our country inflict immeasurable damage and suffering,” Abe said. “When I squarely contemplate this obvious fact, even now, I find myself speechless and my heart is rent with the utmost grief.”

Those involved in the attack at Pearl Harbor were regarded as heroes during the war but later viewed negatively, Yaguchi said.

However, a few did regain popularity.

Minoru Genda, who helped plan the Pearl Harbor attack alongside Adm. Isoroku Yamamoto, served as the Japan Air Self-Defense Force’s chief of staff and later won election to the House of Councillors.

“Pearl Harbor is the only attack that is remembered as a successful attack that Japan staged in WWII,” Yaguchi said. “Probably that is why Yamamoto or Genda are well-regarded.”

Across the political spectrum, many agree that Abe is the perfect person to make this trip.

His conservative credentials and family history — including a grandfather in Japan’s war cabinet who later served as prime minister — shield him from attack on the right.

Abe’s usual critics on the left have been equally supportive. Others simply think it’s the right thing to do.

“Today, Japan and the United States are one of the closest allies, but still hard feelings remain,” said Masahiro Sasaki, founder of a nonprofit organization, the Sadako Legacy. His sister, Sadako, was a Hiroshima girl who survived the 1945 atomic bomb attack and died of leukemia 10 years later.

“It is a due gesture to offer prayers to the spirits of those who perished in the attack,” Sasaki said.

Abe’s visit isn’t just a matter of history. Moving past the postwar era and maintaining relations with the U.S. is a big part of the trip, according to analysts.

Many in the Japanese media have compared Abe’s visit to President Barack Obama’s visit to Hiroshima in May, where he shared his deep sympathies for the victims, without being asked to, or offering, an apology for the past.

The Abe visit shouldn’t be viewed as reciprocal as much as a trip whose time has come, said Kazuya Sakamoto, professor of international politics and Japan-U.S. relations at Osaka University.

“The fact that leaders of both countries can offer prayers for the souls of each other’s war victims shows the maturity of the relations of Japan and the United States,” Sakamoto said.