On Okinawa, the 'drink responsibly' message is driven home 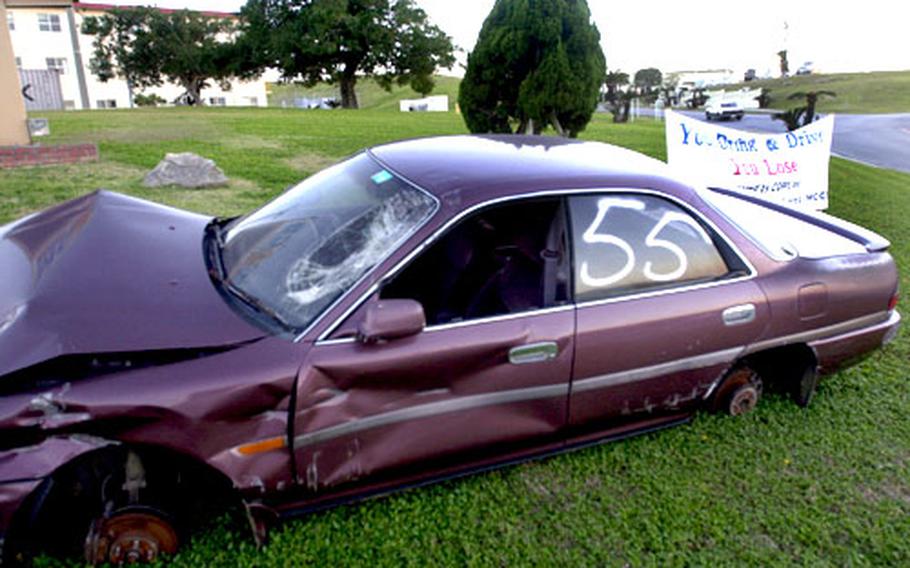 Grim reminders of the dangers of drinking and driving have been placed on bases throughout Okinawa to help spread the word. (Fred Zimmerman / S&S)

CAMP FOSTER, Okinawa &#8212; Military officials are in the last stages of a monthlong blitz against drinking and driving.

From public service announcements to commander&#8217;s channel slides, Mothers Against Drunk Driving ribbons to 100 percent identification card checks, officials have bombarded base residents with the message that &#8220;You drink and drive, you lose.&#8221;

Officials would not comment on the number of people to date caught drinking and driving during the campaign, which began Dec. 1 and ends Jan. 5.

&#8220;We do not gauge our success on numbers and averages,&#8221; said Marine 1st Lt. Marcus Young, Camp Foster Provost Marshal&#8217;s Office Special Enforcement Section officer in charge. &#8220;Our hope is that no one drives impaired. Although we actively search for impaired drivers, we know we are succeeding when we do not find any. Even one is too many.&#8221;

Young emphasized that the program&#8217;s message is continuous and will be enforced year round.

When asked whether island residents would see a heavy police presence on New Year&#8217;s Eve, Young declined to give specifics.