On Okinawa, a battle to be the best 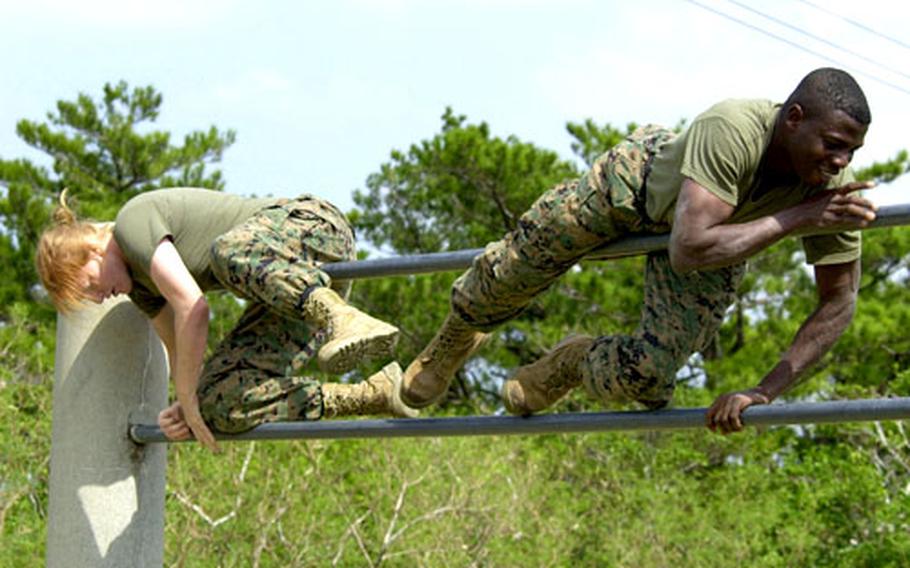 Seamen Britni Ryan, left, and Samuel Ofosuhene climb over bars on the obstacle course on Camp Schwab, Okinawa, with their team from 1st Marine Aircraft Wing during the Battle Skills Competition on Wednesday. The team was one of seven in the annual competition. (Fred Zimmerman / S&S)

Seamen Britni Ryan, left, and Samuel Ofosuhene climb over bars on the obstacle course on Camp Schwab, Okinawa, with their team from 1st Marine Aircraft Wing during the Battle Skills Competition on Wednesday. The team was one of seven in the annual competition. (Fred Zimmerman / S&S) 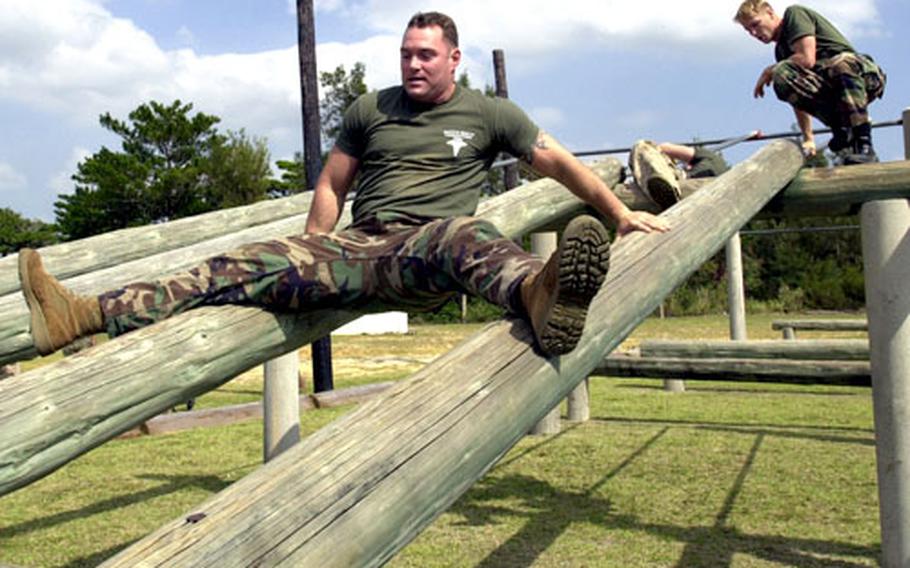 Petty Officer 2nd Class Randy Rozzell, team captain of 3rd Medical Battalion&#39;s team, slides down logs on the obstacle course on Camp Schwab during the Battle Skills Competition. Falling off the obstacle would have meant a penalty in the timed event. Rozzell&#39;s team took overall first place in the competition. (Fred Zimmerman / S&S) 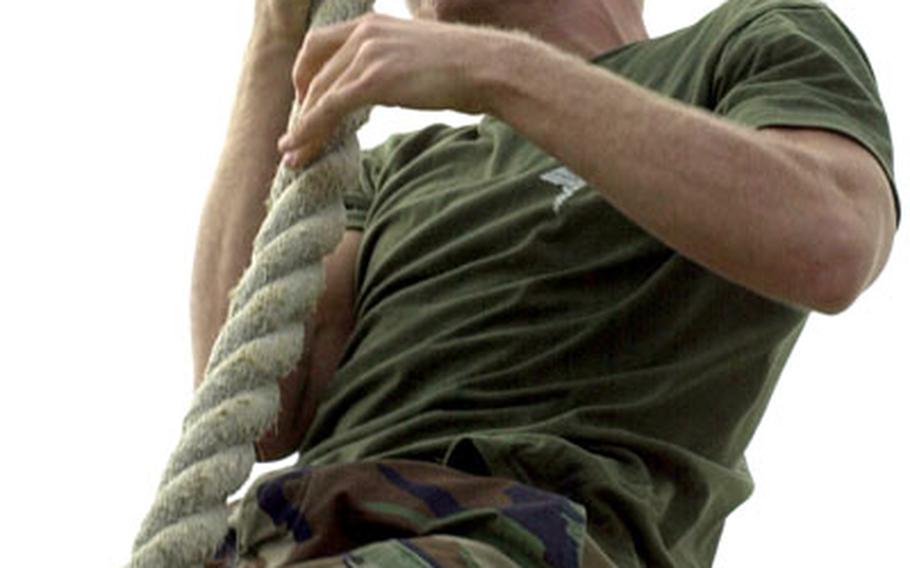 Petty Officer 2nd Class Joe Kirouac makes his way up the rope at the end of the obstacle course during the Battle Skills Competition. Kirouac and fellow teammates from the 3rd Medical Battalion won five of seven events to take top honors in the competition. (Fred Zimmerman / S&S) 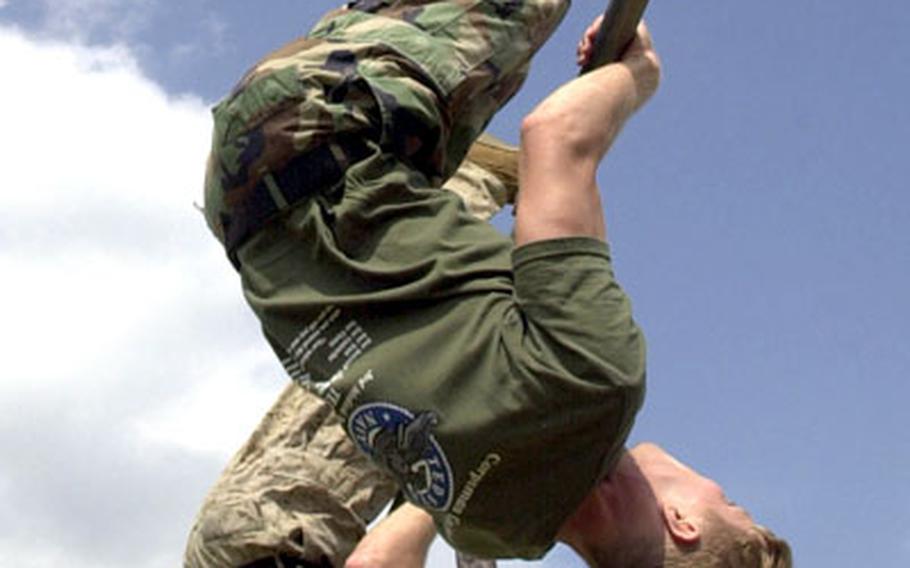 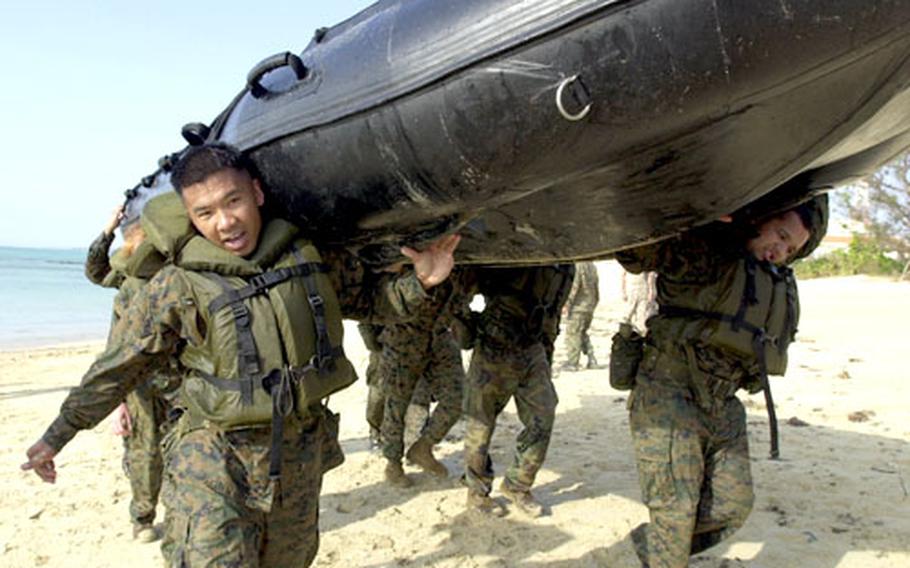 Petty Officers 2nd Class Ronaldo Lachica, left, and Peter Marquez lead their team off the beach of Camp Schwab, Okinawa, on Wednesday after the completion of the Zodiac boat race portion of the Battle Skills Competition. (Fred Zimmerman / S&S)

CAMP HANSEN, Okinawa &#8212; Seven teams of sailors spent the last week putting their bodies through tests of endurance and strength for one reason: to be named champion of the yearly Battle Skills Competition.

The last event &#8212; a 12-mile forced march with packs &#8212; sealed the victory for the team when their staggered start was last and they passed the six other teams to finish first.

The other events in the competition, which took competitors to camps Schwab and Hansen and to the Jungle Warfare Training Center, included a 75-question exam on the Fleet Marine Force program, medical and military skills, land navigation, an endurance course, a Zodiac boat race, an obstacle course and a pistol competition.

The III Marine Expeditionary Force Command Master Chief, Julian S. Talosig, said the competition tests medical knowledge, military skills and teamwork. Each team was made up of eight sailors &#8212; six active and two alternates &#8212; all E-5 and below.

The winners credited their victory to teamwork. Team captain Petty Officer 2nd Class Randy Rozzell said the group took the challenge seriously and practiced hard. They began preparing two-and-a-half months prior to the competition &#8212; most of the workouts being on personal time before and after work, and during lunch. He said they trained five days a week.

Only one member of Rozzell&#8217;s team had ever competed on Okinawa. Rozzell himself had competed in the same type of event at Camp Lejeune, N.C., but he said Okinawa&#8217;s course is much tougher. He said there&#8217;s nothing that compares to the steep and muddy terrain of the Jungle Warfare Training Center&#8217;s endurance course.

Rozzell said winning makes all the hard work and preparation worth it.

The team from 3rd Medical Battalion will get to keep the rotating cup-shaped trophy for the next year, as well as bragging rights.

One team lost those rights for the first time in four years. The team from III Marine Expeditionary Force Headquarters Group was on top the last three years, but this year it fell to third place. Team captain Petty Officer 3rd Class Ryan Bleck said this year&#8217;s team had all new faces &#8212; last year&#8217;s champions have all left the island.

The event ended with an awards ceremony Friday at the Camp Hansen Theater. Each member of the winning team received a Navy/Marine Corps Achievement Medal along with the rotating trophy.

All other competitors received a Commanding General&#8217;s Certificate of Commendation.