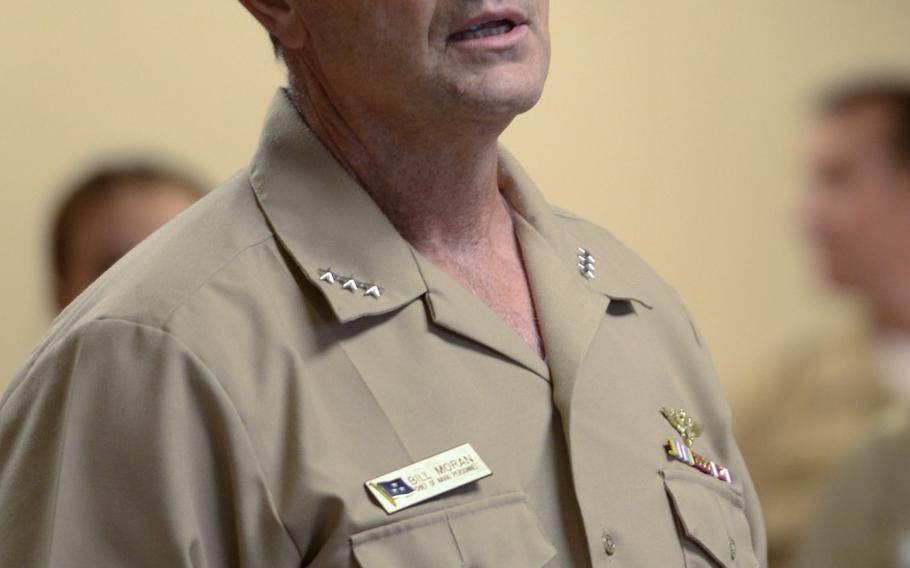 NAVAL AIR STATION NORTH ISLAND, Calif. — Female sailors will not be forced to wear the male version of the crackerjack uniform, the chief of naval personnel told sailors at an all-hands call here Thursday.

Vice Adm. Bill Moran visited the base as part of what he called a “myth buster” tour of bases around the country. During the hourlong question-and-answer session, a young woman told him she had heard rumors that female junior enlisted sailors would have to wear the male uniform.

The Navy has been working on a female version of the male junior enlisted service dress blues, known as the “crackerjack” uniform, as part of a push by Navy Secretary Ray Mabus for greater uniformity between male and female sailors and Marines.

“We are looking very hard at designing an appropriate female version” of the crackerjack uniform, Moran said, though that change is years down the road.

“I think it’s appropriate to look at how it can be more uniform,” Moran said. “Everybody likes the traditional look of the blue crackerjack uniform, it’s a mainstay in Navy tradition. So how do we design one for women that they’d be proud to wear? That’s what our goal is.”

The Navy also is working to design a universal cover that men and women can wear, also to increase uniformity, he said.

And, he said, wear tests are under way for a lighter-weight version of the camouflage uniform.

Not all of the concerns regarded uniforms — Moran said he has heard lots of questions and rumors about pay, benefits and permanent change of station orders.

“We are not going to cut your pay,” Moran told the group of enlisted sailors and officers gathered in a base theater, “Pay is in great shape.”

Tuition assistance and retirement benefits also are not going to be killed, he said, though it’s possible that sailors may eventually have to contribute some fraction of their tuition to use the TA program.

Additionally, he said, the notifications for PCS orders may come just two or three months before a move is required, rather than six months, because of budget concerns. But sailors will still be able to rotate to different stations.

And because the Navy is not facing extreme personnel cuts, sailors should not expect involuntary separations or any “draconian-type measures,” like boards that tell people they have to leave the service, Moran said.

“We’re going to come down (in personnel) if the current budget situation with sequestration does not get fixed,” he said, but that can be addressed through small tweaks in recruiting and re-enlistment.