On Kitty Hawk, the idea is to stay out of the way 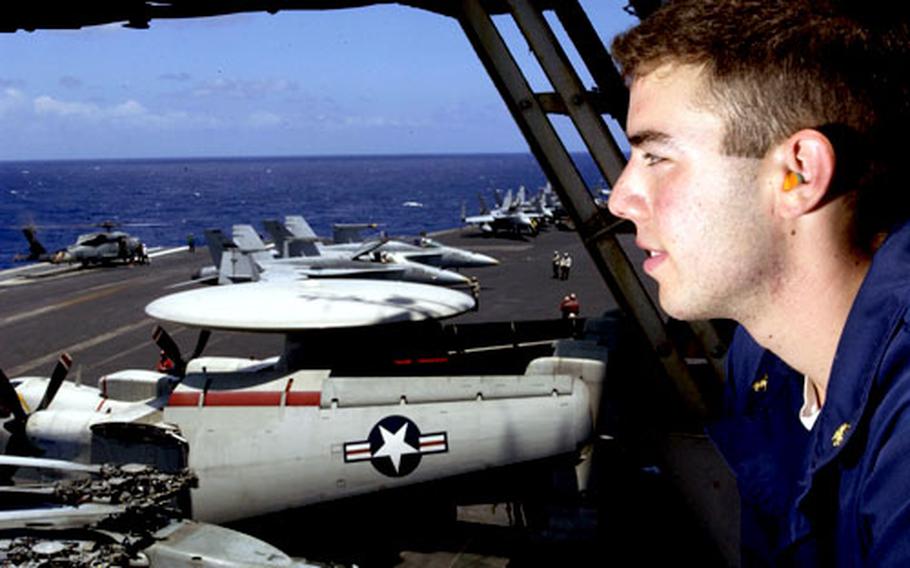 For the past several days, 17 college students have been roaming around the USS Kitty Hawk, through the warren of hatches and hallways and up and down the hundreds of steep staircases called ladderwells.

They&#8217;ve gotten lost, started to wander out onto the flight deck without the proper protective gear, and worried frequently they were in the way.

The midshipmen, from academies and ROTC programs across the United States, are spending nearly three weeks aboard the carrier to get a hint of what life at sea is like and a look at all the jobs that might be theirs after they become commissioned officers. And for many, the time aboard is helping them make a major life decision: Will they be aviators or ship drivers?

Aviators, on the one hand, are undeniably cool, seem to have a lot of fun, always sit together in the wardroom and may even have nicer, softer overalls, Fleming noticed. &#8220;It&#8217;s almost like a fraternity,&#8221; he said.

One officer, an aviator who declined to be named, suggested to the midshipmen to think of it this way: You have a frosty mug of beer. And you have an old rusty nail.

You drink down the frosty beer. That&#8217;s what being an aviator is like.

But then, not all ships are carriers, designed to support the aviators, the midshipmen noted.

And smaller ships provide a more traditional seafaring life than that on the carrier &#8212; a vast floating city with an airport on top &#8212; including more visits to more exotic foreign ports.

Tyler Croft, from the University of Washington, already is thinking ahead to his post-Navy career, after the required four years of service. Aviators must serve years longer to repay their extra training. &#8220;I was thinking of getting on a cruise ship later,&#8221; Croft said.

After a leisurely Sunday brunch, the group clambered up staircases, down hallways and through hatches to check out Vultures&#8217; Row, a primary flight operations viewing spot. The group watched numerous Super Hornets roar off the runway and into the sky.

Lt. Brook DeWalt, ship spokesman, said on such a giant ship, with more than 5,000 people aboard, and one in which foreign navies, visiting dignitaries and a variety of civilians are often streaming through, 17 midshipmen go more or less unnoticed by the majority of the sailors.

DeWalt said having the midshipmen aboard is part of the responsibility to grow the Navy and help junior people advance. And Lt. Cmdr. John Bernard, spokesman for the Kitty Hawk strike group, once a midshipman himself, said they were a pleasure to have aboard. &#8220;It&#8217;s fun to watch them get lost,&#8221; he said.