On Career Day, journalist at head of class 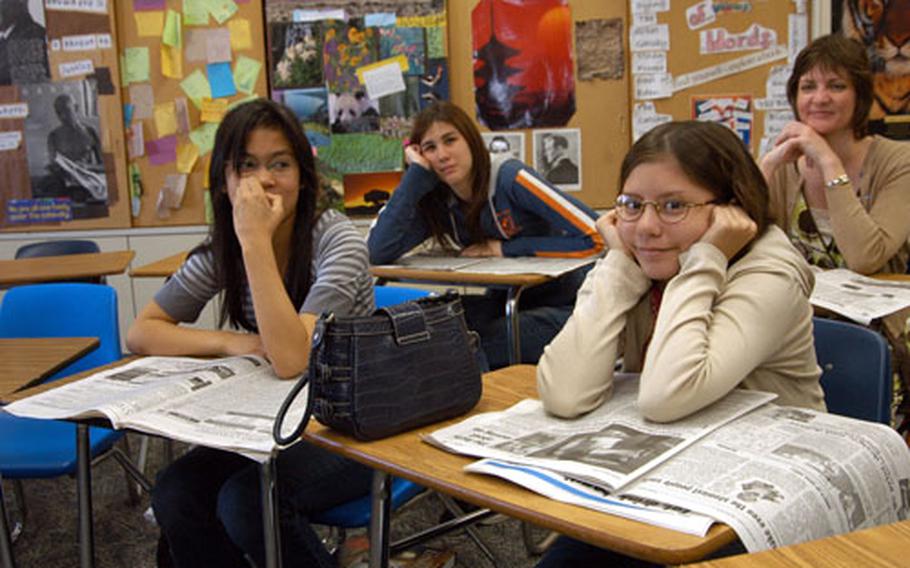 Most of the students who came to Stars and Stripes reporter Allison Batdorff&#39;s second session of the Nile C. Kinnick High School Career Day were there by default because they forgot to turn in their forms. They were very good sports, however. (Allison Batdorff / S&S)

Slowly, my captives came filtering in. It was Career Day Monday, and for the next 50 minutes these Nile C. Kinnick high school students would hear how I earn my paycheck.

Their bland looks &#8212; equal parts boredom and vague interest &#8212; brought me back to my own high school Career Days. As a student, I&#8217;d scan my Career Day catalogue, selecting the speakers with the most astonishing jobs. Ice diver. Circus performer. Jet pilot.

Of course, those sessions were always filled, leaving me talking with titans of the slightly less glamorous industries. Insurance. Banking. Sales.

Well, I wasn&#8217;t about to be one of those under-caffeinated, stodgy Career Day types. I figured my profession &#8212; journalist &#8212; was darn near glitzy. There are even movies about it. Those high school cubbies would be beating the classroom door down &#8230; or so I figured.

Fate had another plan. Of the six students who came to my second group, only one had actually chosen my session. The rest were &#8220;sent&#8221; there. They forgot to turn in their forms. Life came full circle as I realized that I was the &#8220;leftovers&#8221; session.

Apparently, I was up against some pretty stiff competition. Oceanographer. Helicopter pilot. Explosive demolition dogs.

Career practicum teacher Annita Carrell lined up more than 70 speakers from fields ranging from nuclear mechanics to acting to talk to Kinnick&#8217;s estimated 500 students. People love to talk about their jobs, Carrell said.

I wonder if everyone &#8212; like me &#8212; believes their job is absolutely fascinating to others. But the students cast the deciding votes Monday.

The data wasn&#8217;t in yet, but students buzzed most about the sessions on veterinary medicine, military dogs, Naval Criminal Investigative Service and midwifery, Carrell said.

Students are always going to pack the more exciting professions, she told me. But even though my session wasn&#8217;t a big draw, it was still valuable, she said.

Still, the students made me feel pretty good. Senior Tyler Will said the day wasn&#8217;t about finding the career of your dreams as much as it&#8217;s about weighing different options.