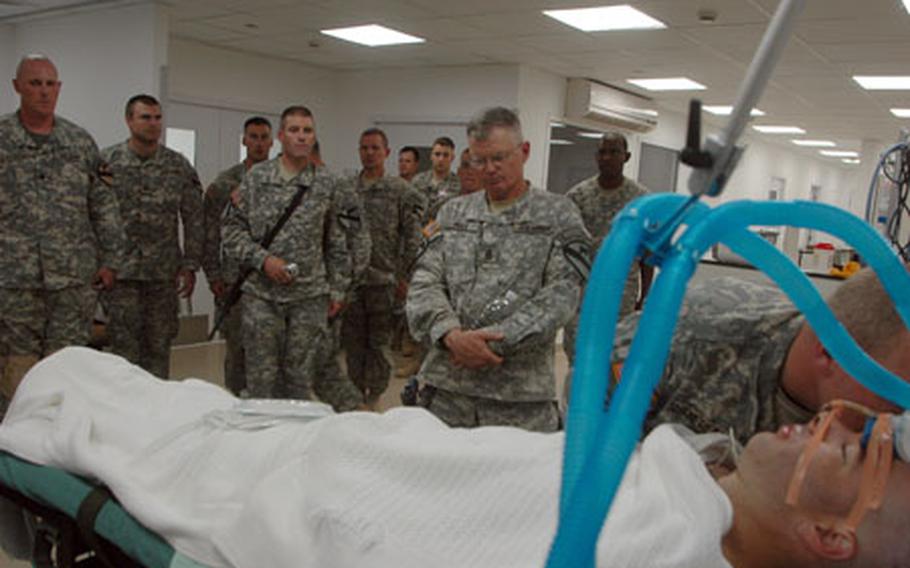 Third Brigade, 1st Cavalry Command Sgt. Maj. Donald Felt, center, and others from the unit and hospital at Balad Air Base look on as brigade commander Col. David Sutherland speaks to one of his wounded men. (Les Neuhaus / S&S) 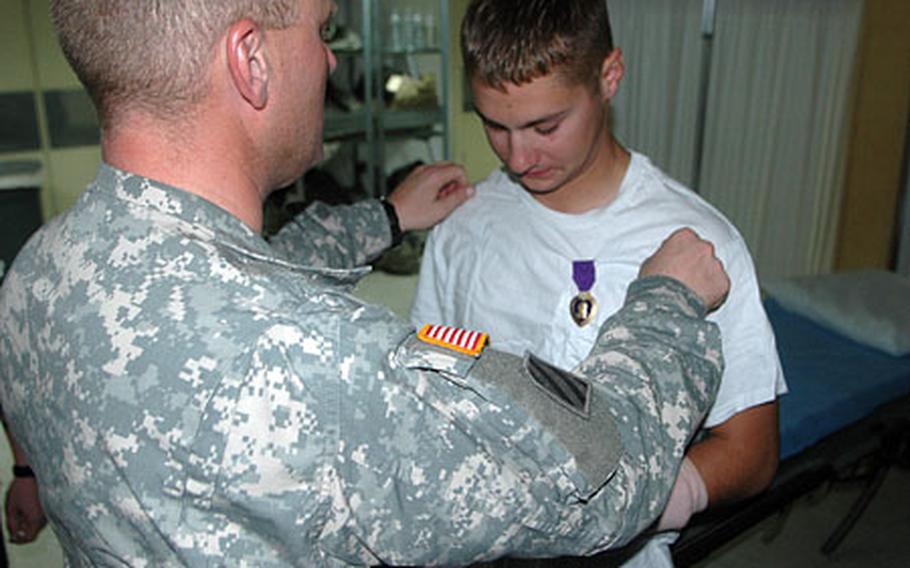 U.S. Army Col. David Sutherland, commander of the 1st Cavalry Division&#39;s 3rd Brigade, pins a Purple Heart on Spc. Jeremiah Church, 21, of Gary, N.Y., at the main hospital on Balad Air Base. Church was shot through the arm while conducting combat operations in Diyala. He is a member of the 82nd Airborne Division&#39;s 5th Battalion, 73rd Cavalry Regiment. (Les Neuhaus / S&S)

FORWARD OPERATING BASE WARHORSE, Iraq &#8212; It&#8217;s pitch black inside a Black Hawk helicopter at Warhorse late Thursday night, save for dim green lights illuminating the faces of the pilots, who are heaving the beast into the air.

In it are U.S. Army Col. David Sutherland, commander of the 1st Cavalry&#8217;s 3rd Brigade, and Chaplain (Capt.) Jesus Perez. Moments before, 155 mm Paladin howitzers were shaking the ground as artillery flew outbound.

The pair is on their way to visit two soldiers injured in combat just hours earlier. Sutherland, 46, has already had a busy day.

Militants ranging from the 1920 Revolution Brigades to al-Qaida in Iraq work every day to confound or kill the 5,000 U.S. military personnel and 25,000 more Iraqi security forces working in the area under Sutherland&#8217;s command. After Operation Arrowhead Ripper drove thousands of insurgents from Baqouba in June and July, the mission now is to hold on to the ground gained.

In one 24-hour period, Sutherland will play host to the province&#8217;s top police chief, hashing out recruitment goals; brief the former U.S. Army vice chief of staff on the progress in the province over the last three months; fly to be by the side of his injured troops; and hold a meeting with Iraqi security forces close to the Iranian border.

On midday Thursday, the issue is police recruitment with the province&#8217;s top cop, Staff Maj. Gen. Ghanem Abass Ibrahem, who, along with Sutherland, is agreeing that more police are needed.

A major &#8220;cleaning of the house&#8221; has occurred in Diyala since December 2006, with roughly 5,000 Iraqi cops fired for sectarian agendas. The previous top cop also was fired. He had recruited many of his men from Sadr City, infamous as a stronghold to Shiite cleric Muqtada al-Sadr.

The police chief just hired another 6,000 men, but many are still in the training pipeline. But their training, the men say, is being done while &#8220;in contact.&#8221; However, vetting them is the next issue.

After the meeting, Sutherland heads straight into another meeting already under way.

He and U.S. Army Brig. Gen. Michael Bednarek, who oversees operations for Multi-National Division&#8211;North, are briefing retired Gen. Jack Keane, who is to assess the progress made since Arrowhead Ripper.

Sutherland sits nearby, flanked by majors and lieutenant colonels &#8212; many of whom are battalion commanders within his brigade &#8212; who do the talking. State Department, intelligence and Special Forces personnel listen. Keane seems impressed.

Following the meeting, Sutherland&#8217;s business is interrupted by the distressing news that one of his training team leaders, Maj. Dominique Dionne, has been shot in the face during a shootout. Another soldier, Capt. Tod Stephens, who was with Dionne, also was injured during the firefight, but only slightly.

Sutherland sends out word to have his Black Hawk readied while Dionne undergoes six hours of surgery.

The Black Hawk departs and within 30 minutes he is at the side of Dionne. A prayer is said by Perez, the chaplain, with other men of the 3rd Brigade looking on, along with hospital staff.

Everyone snaps to attention as Command Sgt. Maj. Donald Felt slips Sutherland a Purple Heart Medal. Sutherland pins the medal onto the bed sheet. He pins a Combat Action Badge onto the sheet as well.

Then Sutherland makes some rounds. Other men from his unit are in a nearby ward, and he plans a surprise visit to boost spirits.

No sooner has Spc. Jeremiah Church turned a corner, than Sutherland is grabbing him by the shoulder, talking to the soldier. Sutherland pins the Purple Heart and Combat Action Badge to Church&#8217;s T-shirt.

By Friday morning, Sutherland is at Forward Operating Base Normandy, on the eastern fringes of the province, close to the Iranian border. He&#8217;s meeting with the police commander of Muqdadiyah and the Iraqi army&#8217;s 3rd Brigade, 5th Division commander.