On base or off, Camp Fuji Marines stay busy 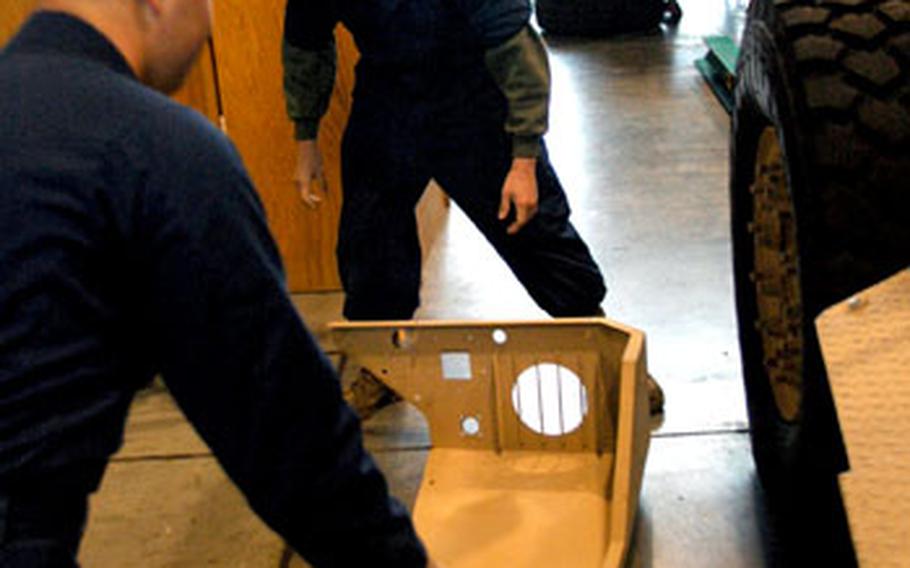 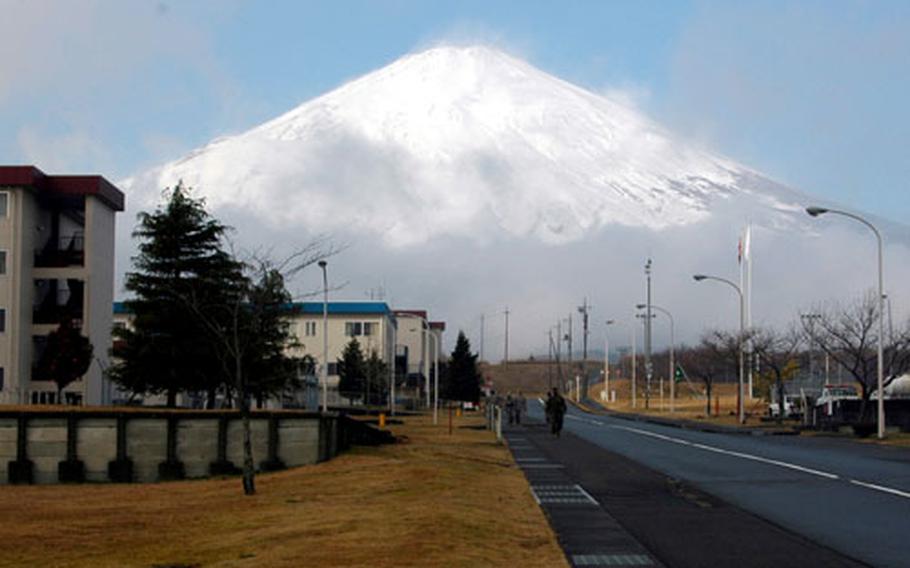 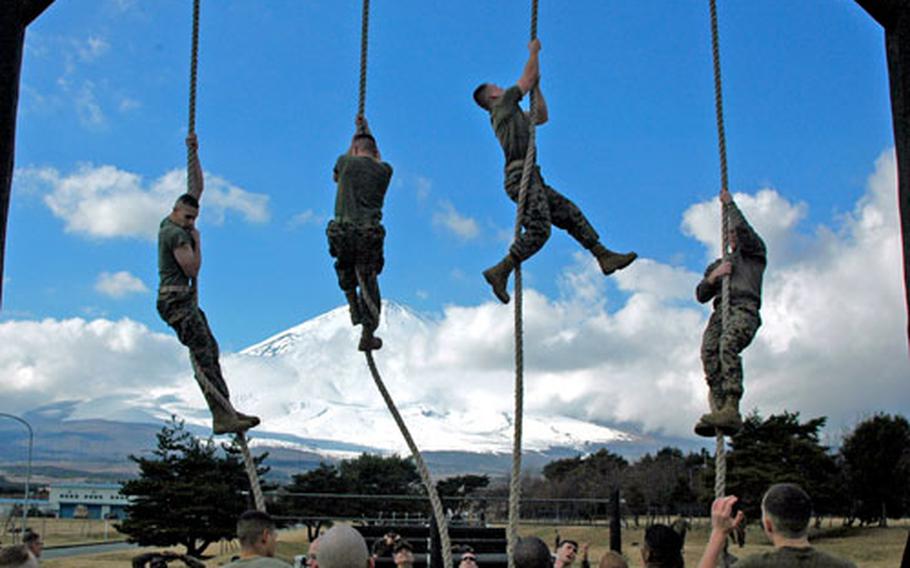 With Mt. Fuji in the background, Marines climb up a rope on the Camp Fuji obstacle course during a competition between the base&#39;s two companies. One-hundred eighty-five Marines call the remote mountainside installation their home. (Bryce S. Dubee / S&S) 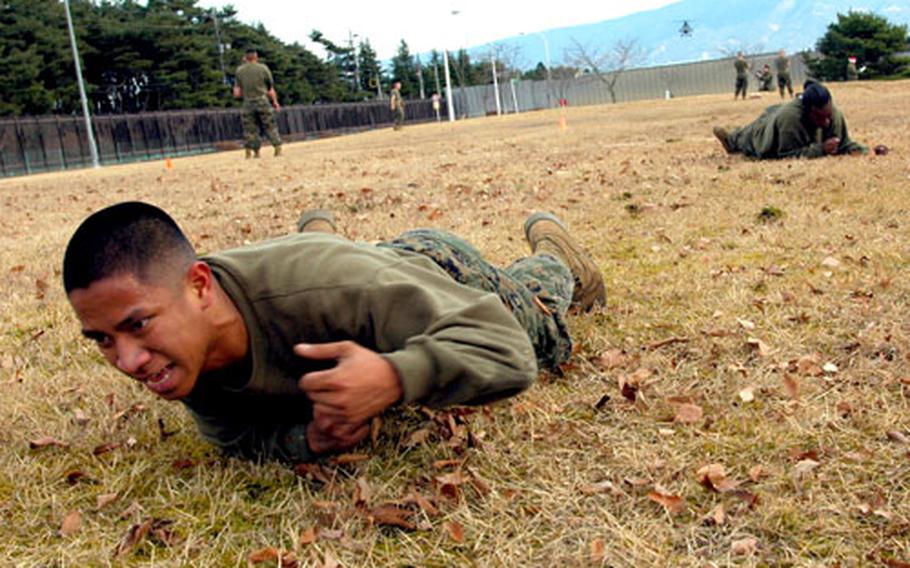 CAMP FUJI, Japan &#8212; When Pfc. Carl Williams found out he was going to be stationed at Camp Fuji, he was a little surprised.

But while there&#8217;s no commissary, no bank, not even a swimming pool for the 185 Marines assigned to "The Fuj," it is home.

"What we have here are 34,000 acres of maneuver training area for U.S. forces throughout the Pacific," said Col. Robert G. Golden III, commanding officer of the Combined Arms Training Center, Camp Fuji.

The 309-acre installation is "a little head attached to a big body," he said, referring to the two massive Fuji Maneuver Areas used jointly with the Japan Ground Self-Defense Force.

"We even have a beach, so they can practice beach landings," he said, adding that units come from as far away as South Korea, Hawaii and even the West Coast.

The mission of the Marines and roughly 150 civilians working at the base is to support the training units as they come through during the year, assisting in a variety of tasks including range control, vehicle maintenance and explosive ordnance disposal, as well as providing lodging and food.

That means that the Fuji Marines stay busy, as Williams, a mechanic, found out soon after he arrived.

"The day after I checked in, I was on the truck working right away," he said.

The Fuji Marines also stay busy off duty, with Camp Fuji laying claim as one of the most active per capita volunteer programs in the Marine Corps.

"Our goal is to get every Marine an Outstanding Volunteer Service Award," said Golden, citing the numerous orphanages, mental health clinics, churches and nursing homes where the Marines lend helping hands. "There&#8217;s no reason why we shouldn&#8217;t accomplish that."

Volunteering is a way to show appreciation for support from the local community, including the neighboring town of Gotemba. Golden said the community has reciprocated, providing Marines with free passes to an indoor water park, local hot spring and other amenities.

There&#8217;s also the ever popular "Fuji Night," when the base opens its gates to the neighboring community on Friday and Saturday nights, turning the Roadhouse Enlisted Club into a crowded nightclub.

"The Roadhouse is pretty much the main gathering place," said Pfc. Jerica Neilson.

With the rewards also come challenges. One of the biggest challenges to life on "The Fuj" is that it is a one-year tour in which troops must leave their families behind.

Being away from family and friends is never an easy thing, said Golden, who described life away from his family as "a challenge at times." But people stationed at Fuji try to make the most of it.

"You start to make your own little family here at Fuji," said DeJarnette, explaining that he has taken some of the junior Marines under his wing. "Everyone here especially comes together during the holidays."

And as with any close-knit organization, not much can happen without everyone else knowing.

Powell said his one wish was for the command to be able to offer more of the creature comforts available on other bases.

Popular on the weekends, the Roadhouse stays relatively empty during the week.

Golden said the "things-to-do list" is growing, including the recent addition of a small movie theater and a six-hole golf course the Fuji Marines built.

Lance Cpl. Jerry Coker said he goes to the gym or watches movies and hangs out with friends when he&#8217;s not on duty.

"Everybody plays video games," said Cpl. Chad Lepine, who added that on the weekends he visits some of the local restaurants and clubs off base. He said some Marines journey to Tokyo or Yokosuka on the weekends, but not very often due to the expense.

"Usually after you get paid," he laughed.

Golden said the "the biggest morale booster" is when large units come train, explaining that when that happens Fuji Marines stay busy by fulfilling the installation&#8217;s mission.

Powell said rewards gained from a Marine&#8217;s time on the mountain aren&#8217;t always apparent right away.

"There is a tighter bond here than at most other units," he said. "A lot of young Marines won&#8217;t understand that until after they leave."

&#8226; Marine siblings defy the odds with assignment to Camp Fuji