On a day that symbolizes the nation, remembering the forgotten soldiers 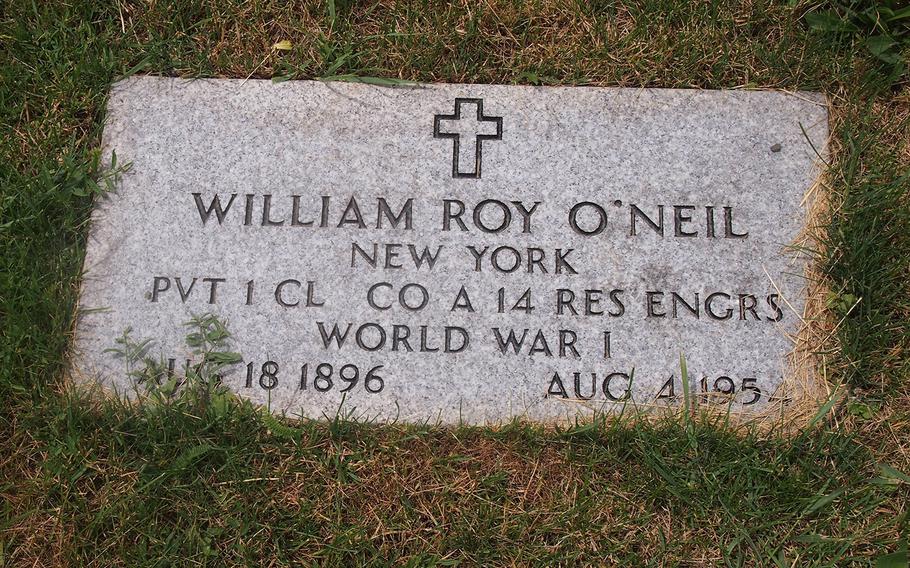 The gravestone of Private 1st Class William O'Neil, a World War I veteran whose grave at the St. Agnes Cemetery in Menands, N.Y. remained unmarked from 1954 until this year. (Albany Diocesan Cemeteries)

The gravestone of Private 1st Class William O'Neil, a World War I veteran whose grave at the St. Agnes Cemetery in Menands, N.Y. remained unmarked from 1954 until this year. (Albany Diocesan Cemeteries) 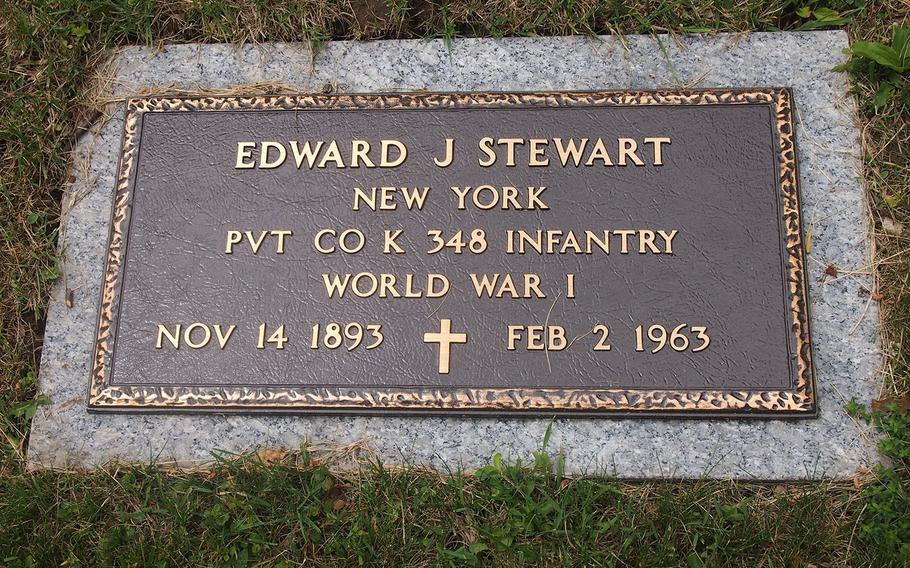 The new gravestone of Private Edward Stewart, a World War I veteran whose grave at the St. Agnes Cemetery in Menands, N.Y. remained unmarked from 1963 until this year. (Albany Diocesan Cemeteries) 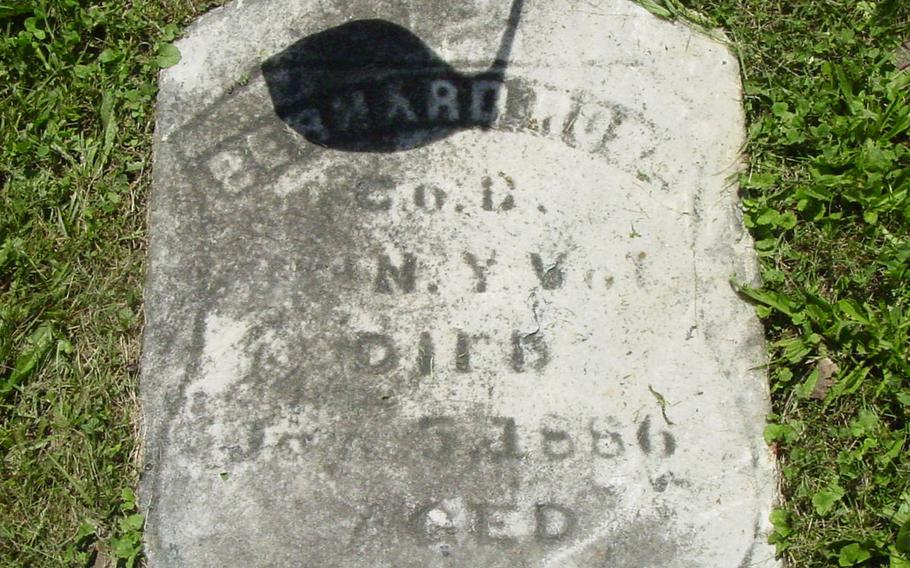 The faded tombstone of Bernard Ross, a drummer boy in World War I, buried at St. Agnes Cemetery in Menands, N.Y. The cemetery replaced the stone in a project to commemorate its veterans. (Albany Diocesan Cemeteries) 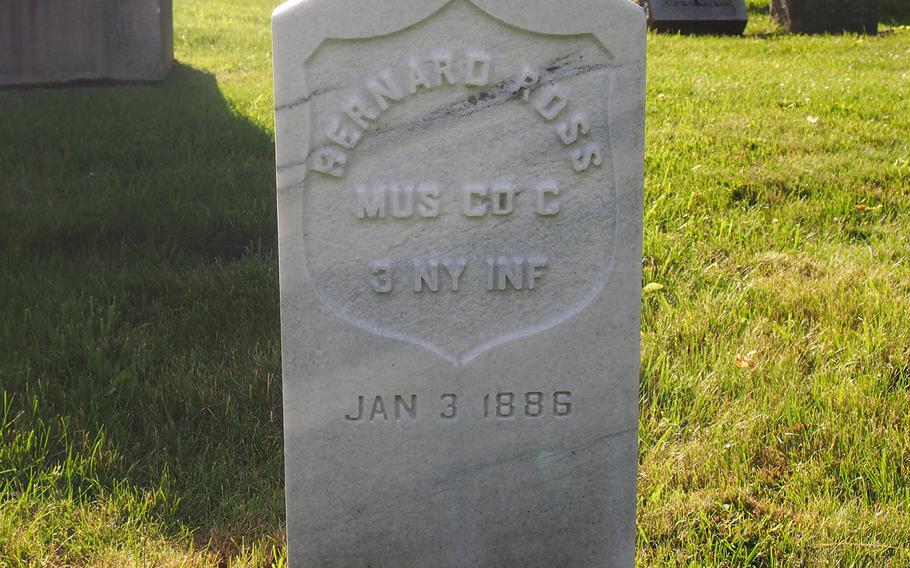 The new tombstone of Bernard Ross, a drummer boy in World War I, buried at St. Agnes Cemetery in Menands, N.Y. The cemetery replaced the stone in a project to commemorate its veterans. (Albany Diocesan Cemeteries)

WASHINGTON — There were no markers on their graves or families laying flowers at their final resting place. Their service to this country, memorable in times of war, had long been forgotten.

But Tuesday is Flag Day. And in a small town in upstate New York, 27 headstones recently placed on graves that had long remained unmarked will be dedicated with full military honors, to men who served their country in life but became anonymous in death.

“We make a promise in our cemetery that no soldier is forgotten,” said Kelly Grimaldi, historian for the Albany Diocesan Cemeteries. “We make that promise in our country.”

To Grimaldi and her colleagues at the diocesan cemeteries, Flag Day, which was first established by President Woodrow Wilson in 1916, seemed a fitting day to offer symbolic tribute to these soldiers of the Spanish-American War and World Wars I and II, who had remained unrecognized at St. Agnes Cemetery in Menands, N.Y. for many years.

The cemetery had a list of people buried in its two veterans lots. But for decades, no one noticed half of the 54 graves had no stones.

Then, in 2008, a man in Ireland wrote to inquire about a relative buried at St. Agnes. His inquiry led to the revelation that there was no marker, prompting efforts through an application with the Department of Veterans Affairs to place one there that same year, Grimaldi said.

Two years later, Grimaldi became the cemeteries historian and began researching other veterans’ graves. Walking among the plots with the list of buried veterans, she realized just how many were unmarked.

Marking them became her mission.

The St. Agnes Legacy Before assuming her job at the Albany Diocesan Cemeteries, Grimaldi had been volunteering for three years at St. Agnes helping to compile a list Civil War soldiers buried at the historical cemetery.

Those graves – now known to number at 517 – were disbursed among the thousands in the entire 114-acre cemetery and she would walk from tombstone to tombstone documenting ones that indicated Civil War service.

There was no known master list; no way to know if a Civil War soldier was buried in an unmarked grave.

After she came on staff in 2010, Grimaldi discovered a treasure trove of information in the archives. Most exciting: a 1924 survey that identified all the soldiers laid to rest in St. Agnes Cemetery up until that time, their names and lot numbers and in which war they served.

“I felt like I hit the Lotto,” she said. “It was like finding a huge piece of a missing puzzle.”

So, even as she was researching the 27 veterans from the 1950s, Grimaldi also doubled down on the Civil War soldiers’ graves. Using the newfound list, she determined that about one-third of the 517 Civil War soldiers buried at St. Agnes had missing or had badly damaged grave markers – more if you account for soldiers who died after the 1924 survey.

It became a grassroots effort that drew in community participation. The diocesan cemeteries held a Civil War memorial and more than 100 people showed up.

People contributed $100 a piece to an “adopt-a-soldier” campaign, covering the cost of a stone, Grimaldi said. One man donated $5,000 to restore the gravesites of 55 soldiers in a single section, she said.

“I couldn’t believe it,” Grimaldi said. “So many patriotic citizens around here wanted to help.”

Reclaiming the 27 The cemetery buried its more recent veterans at the two VA lots, where 27 of the 54 graves were missing markers, and St. Agnes had a list of those veterans that included the name, age and marital status of the person who died, where they died and the dates of death and burial.

It did not include the branch of service or their rank.

But nearly all of the veterans whose grave markers were missing had died at the VA medical center in Stratton, N.Y. between the years of 1954 and 1963, Grimaldi said.

She didn’t focus too much on why and instead spent her time trying to fix the neglect. But she did learn most of them did not have next of kin and many of them were first generation immigrants from Poland, Germany, Austria, Italy and Ireland.

“They died in Stratton VA hospital, were buried in a VA lot and then forgotten,” Grimaldi said. “When they died, they had nobody looking after their affairs, nobody to submit their application for their grave markers. Essentially 60 years later, I served as their next of kin.”

Grimaldi wrote to the VA and reached out to the Stratton VA Medical Center. For 13 of the deceased, documentation came back within weeks and the VA approved headstones.

The remaining 14 took six years, she said, and only after Linda Weiss, then director of the Stratton VA, took the project under her wing. Weiss dug through the archives at the hospital and worked with the VA’s Memorial Affairs Department to track down the service history for 11 of the 14 remaining veterans.

Finally, last year, they raised $750 privately for the final three gravestones, and the last few of them went in this spring, after the ground had thawed.

“It was never off the radar,” Grimaldi said. “It was always in the back of my mind to take care of these guys.”

The Little Drummer Boy Grimaldi was not able to get too much information on the veterans from the 1950s. Those records – or what remains of them, are at the VA.

Unexpectedly, there’s a lot more information on the Civil War soldiers and she hopes to compile all their stories at some point.

One of the gravestones they replaced belonged to Bernard Ross, known as Barney, who was just 12 years old when he served as a drummer boy throughout the Civil War and died in his 30s, Grimaldi said.

Grimaldi was able to find his unit’s muster roll – the 3rd Infantry Regiment, Company 8 – and learned the details of their fate.

“The muster roll described him as being only 4-foot-9 when he went into the war – just a boy in the 6th or 7th grade,” she said.

They dubbed him “the little drummer boy,” and the more Grimaldi learned, the more she realized this little boy saw terrible things.

“Think what he saw when these men came home to camp with legs blown off, or arms, with holes in them,” she said. “That kid saw some gore, some terrible things. They all did.”

Military Honors Tuesday’s ceremony will include full military funeral honors. There will be a flag presentation and Taps will be played.

There will also be a firing party, and the Jr. ROTC from Lasalle Institute will serve as color guard, Grimaldi said.

“All veterans should be honored,” said Peter Moran, the New York State military forces honor guard coordinator. “It is unfortunate that in some cases, unclaimed remains and things like that, it’s a lot harder to do.”