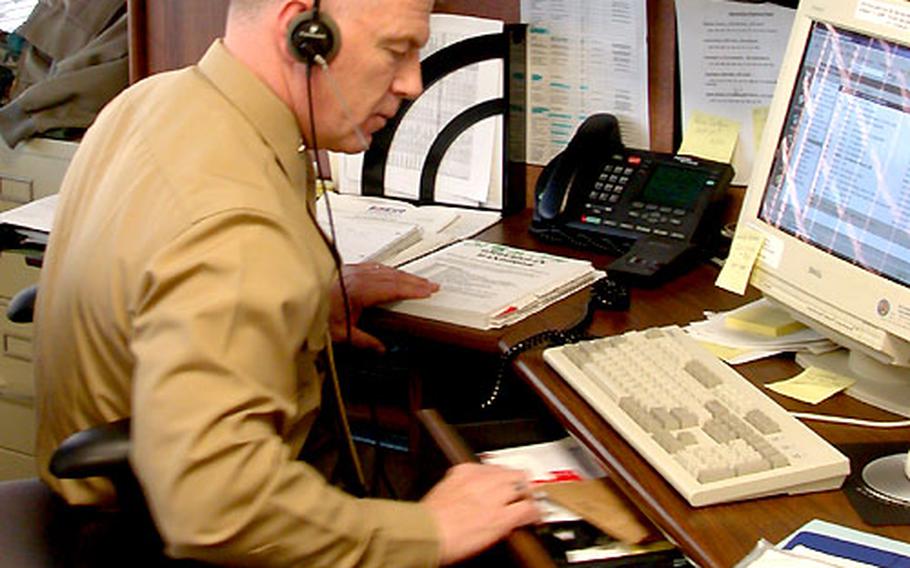 Col. Alan Smith, director of military member support for the National Committee for Employer Support of the Guard and Reserve, helps a hotline caller Tuesday who has questions about an employee deploying for Operation Enduring Freedom. (Lisa Burgess / S&S)

It&#8217;s Tuesday afternoon in the Arlington headquarters offices of the National Committee for Employer Support of the Guard and Reserve, and 2nd Lt. Barbara Leonard, one of three ombudsmen working the hotline phones, is fielding her 15th call since lunch.

On the other end of the line, a female Army reservist officer from California is explaining to Leonard that she works for a city that gives reservists up to a full month&#8217;s pay when they are activated &#8212; a generous arrangement not offered by the majority of local governments.

But the caller is concerned because the city is counting weekends as part of the 30-day pay period, even though her Reserve duty takes place over the weekends, as well as weekdays.

Patiently, Leonard explains that federal law does not mandate employers to pay reservists for activation time &#8212; only to grant them the leave and make sure their jobs are there when they come back.

But the caller continues to insist that the city&#8217;s rule doesn&#8217;t include weekends.

Leonard hangs in there, offering helpful suggestions even though this issue is clearly local, not federal, and so outside ESGR&#8217;s mandate.

Without altering her patient, helpful demeanor, Leonard explains &#8212; for the third time &#8212; that there is no federal law that mandates the city&#8217;s payment, and so the issue is outside the JAG&#8217;s jurisdiction.

The caller finally agrees to try that route.

Leonard wishes her luck, and hangs up.

The ombudsman rubs her forehead. Some days, she says, she feels as if her job description includes psychologist and even mom.

Part of the Office of the Assistant Secretary of Defense for Reserve Affairs, ESGR was established in 1972 to act as a liaison to reservists and their civilian employers.

ESGR&#8217;s headquarters office has six full-time ombudsmen, three of whom are usually handling the phones at any one time, while the others are attending training, off-site meetings or mediation sessions.

ESGR also has offices in every state, staffed by both paid and volunteer ombudsmen trained to provide accurate information about federal laws, help with problems, and mediate conflicts.

With war looming in Iraq, 175,000 National Guard and reserve members mobilized right now, &#8220;and more are to come,&#8221; Col. Alan Smith, ESGR&#8217;s director of member military support, said in a Tuesday interview squeezed in between answering calls to the hotline in the Arlington office.

As a result, ESGR hasn&#8217;t been this busy since Desert Storm, he said.

Some days are busier than others, Leonard noted.

On Monday, she personally answered 82 calls. Tuesday was slower, with about half that number coming through.

Until recently, ESGR was able to solve most of the conflicts between employers and reservists simply by clarifying the law, Smith said. There was no need to resort to the next step, which is referring a case to the Department of Labor for investigation.

&#8220;We relate that to the shorter notice of the mobilizations, so the panic button gets pushed a bit sooner than before, when [reservists and employers] had time to sit back and do some research and preparation.&#8221;

Although calls do fall into broad categories, for the most part, every caller has a unique situation.