Olympic charm offensive: US on sidelines as 2 Koreas move closer together 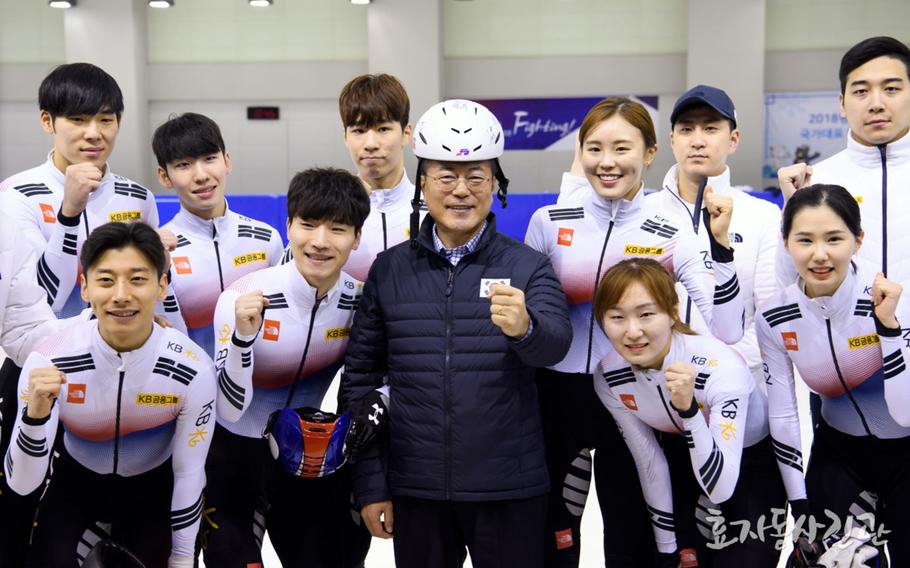 SEOUL, South Korea — If only for an Olympic moment, North and South Korea have come together in talks that have eased tensions after months of saber rattling that threatened to propel the divided peninsula into a new war.

The two longtime adversaries agreed Wednesday to form a combined women’s ice hockey team and to march together under a unified flag at the opening ceremony of the Winter Games, which will begin Feb. 9 in a South Korean resort town.

The détente has raised hopes for reconciliation between the two sides, but observers say it’s likely temporary and may come at a cost to U.S.-led efforts to pressure the North Korean regime to abandon its nuclear weapons program.

Japanese Foreign Minister Taro Kono called it a “charm offensive” by North Korea and warned the world not be naïve about the communist state’s motives in agreeing to participate in the quadrennial competition.

“It is not the time to ease pressure, or to reward North Korea,” Kono was quoted as saying earlier this week. “The fact that North Korea is engaging in dialogue could be interpreted as proof that the sanctions are working.”

U.S. sidelined Left on the sidelines, the United States has cautiously welcomed the talks while vowing to maintain its campaign of maximum pressure and sanctions against the North.

“We see this as an opportunity for the regime to see the value of ending its international isolation by denuclearization. We still are very much focused and hope that that happens,” White House spokeswoman Sarah Sanders told reporters on Wednesday.

“This isn’t the first time that the two countries have marched together, and we hope that this experience gives North Korea and its athletes a small taste of freedom,” she added.

The U.S. military agreed to suspend annual war games with South Korea until after the Olympics and the March 8-18 Paralympics. But it has continued to build up resources in the region, deploying three types of supersonic bombers to Guam and dispatching several warships.

Inter-Korean negotiations have unfolded with surprising speed since North Korea’s leader offered an olive branch in his New Year’s speech.

That was a sharp turnaround from the 2017 address in which Kim Jong Un said his country was entering the “final stages” of test-launching an intercontinental ballistic missile, prompting President Donald Trump to tweet “it won’t happen!”

A year later North Korea has test-fired three ICBMs, including two that flew over Japan, and conducted its sixth and most powerful underground nuclear test while engaging in a bitter war of words with Trump.

But the regime also has been hit with punishing economic sanctions and diplomatic pressure that officials say are starting to bite.

Trump’s threats to unleash “fire and fury” and to “totally destroy” North Korea if forced to defend the U.S. and its allies also have injected a new element of uncertainty in the decades-old standoff.

The president has alternated between threatening military action and indicating a willingness to hold talks with Kim himself. He questioned the value of such a meeting in an interview this week with Reuters.

“I’d sit down, but I‘m not sure that sitting down will solve the problem,” Trump told the news agency.

Evans Revere, a former senior U.S. diplomat who has been part of recent unofficial talks with the North Koreans, said Pyongyang probably sees an opening to try to boost its image in a bid to persuade the South and other countries to ease punishing economic sanctions and international isolation.

“This is about creating an atmosphere of hope and anticipation and using South Korea’s eagerness to host the games successfully,” he said Tuesday in an interview. “Once that is done the hope is that people will begin to be sympathetic to the North’s agenda.”

“I’m absolutely convinced that after a small window around the Olympics you will see them testing again both in the nuclear area and in the ICBM area,” he said.

At least in the short term, it’s a victory for South Korean President Moon Jae-in who has pressed for the North to participate in the Olympics as part of his outreach efforts and to tamp down fears about security of the games, which are taking place about 60 miles south of the heavily fortified border.

“I believe it will be a great opportunity to thaw the South-North Korea relationship that is frozen solid,” Moon said Wednesday while visiting athletes at a training center south of Seoul.

The two sides have agreed to renew military talks on easing border tensions, although North Korea swatted away an attempt to raise the nuclear issue and reiterated that its nuclear weapons are aimed at the U.S. in the opening meeting on Jan. 9.

South Korean and U.S. officials have played down the risk to their longstanding alliance, which was forced during the 1950-53 war that ended in an armistice instead of a peace treaty. The U.S. maintains about 28,500 servicemembers in South Korea.

Alliance dilemma But experts said Seoul could face a dilemma as it tries to extend the Olympic détente to other issues, such as family reunions of Korean War survivors who were left divided and whether to reopen the joint business venture at the Kaesong industrial complex.

“I do think while we should welcome North Korea’s overture to the South and easing of tensions, we should be clear-eyed about what North Korea will demand in return for this overture,” Sue Mi Terry, a senior fellow at the Center for Strategic and International Studies, said this week in a podcast.

“If South Korea does decide to concede to North Korea or just to improve relations with North Korea … I am concerned that it’s going to create a fissure in the alliance and really cause problems,” she said. “I do think that President Moon understands this and so South Korea is in a difficult position right now.”