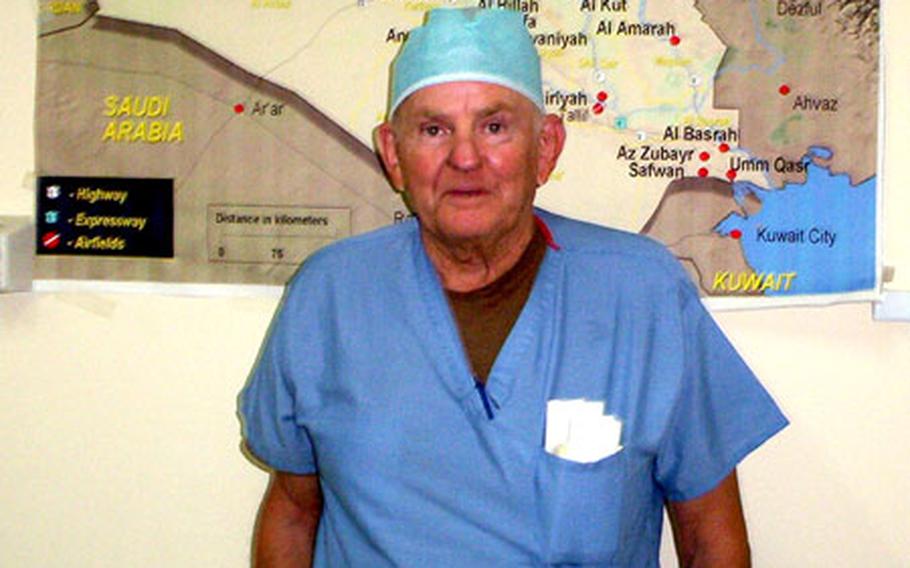 Dr. Phillip Ritchey, 69, was asked by the Army in November 2003 to return to active duty for a tour in Baghdad. Ritchey accepted. (Courtesy to Stripes)

The flag went up in November 2003 for retired Army Lt. Col. Phillip Ritchey, when facing a critical shortage of eye surgeons, the Army phoned him with a request: Would you consider putting your uniform back on and deploying to Baghdad?

Baghdad isn&#8217;t so different from many of the places where Ritchey and his wife of 48 years, June, had traveled to volunteer their medical skills, he said in a recent telephone interview with Stars and Stripes.

The terrorist attacks on Sept. 11, 2001, prompted a wave of inquiries from retirees who wanted to serve once again.

But it wasn&#8217;t until Iraq rotations began to strain the Army and Marine Corps that the services&#8217; personnel officials began not only to take such offers seriously, but to actively seek volunteers to fill critical shortages.

The Army has received 12,000 telephone calls and e-mails from veterans offering to come back to active duty, according to Wayne Maricle, chief of operations in the Mobilization Operations Division of the Army&#8217;s Human Resources Command, or HRC, in St. Louis.

About 2,300 have followed through with formal applications and are considered &#8220;confirmed&#8221; volunteers, Maricle said.

The Army has returned 357 retirees to active duty, including 286 who are now serving, according to Don Ashenfelter, chief of the Army&#8217;s retiree mobilization program at HRC.

The Marine Corps has 77 older Marines back on duty and is seeking more volunteers with critical skills who left the Corps within the past five years, according to Lt. Col. Jeffrey Riehl, the Corps&#8217; plans and mobilization officer for manpower and reserve affairs.

But the Navy and Air Force, which are working to reduce their active-duty end strength, have chosen not to bring retirees back, spokesmen for those services said. The Air Force did bring back some retired pilots beginning in early 2001, the program has been suspended.

In December, Army officials decided to actively solicit retirees for a potential volunteer re-mobilization, instead of waiting for veterans to initiate the re-entry process.

Retirees may be somewhat slower than their younger counterparts, but they make up in experience for what they may lack in the physical arena, Zimmerman said.

Zimmerman received an e-mail from HRC on Dec. 30, 2004, asking if he might consider a return.

Now Zimmerman is &#8220;on pins and needles,&#8221; waiting to see if he will be allowed to re-enter after taking a special hearing test the Army required because he wears hearing aids.