Older and wiser: Seabees in Iraq Master Chief Beryl Millard, 57, of the 14th Naval Mobile Construction Battalion, on a bulldozer at al-Asad, Iraq. Millard operates a 40-ton crane at his job back home in Tampa, Fla. (Charlie Coon / S&S) 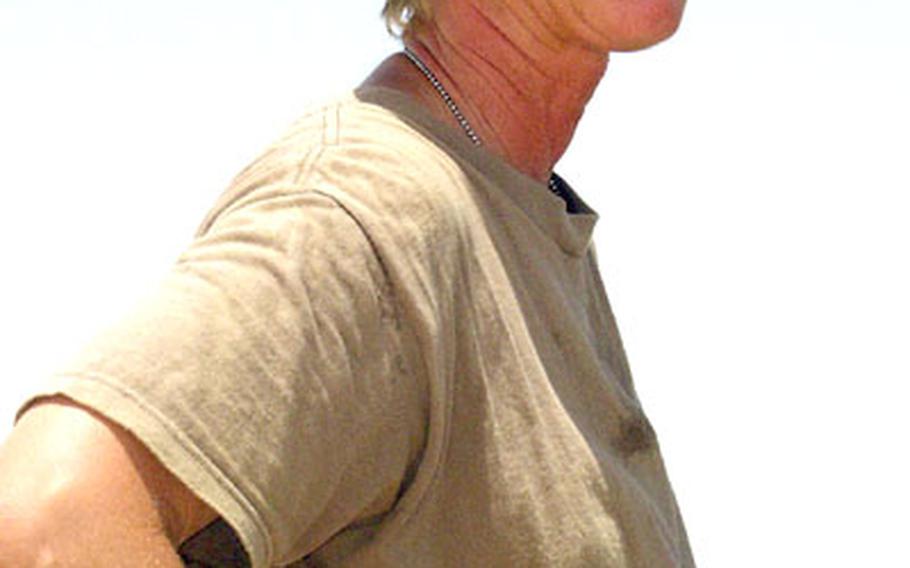 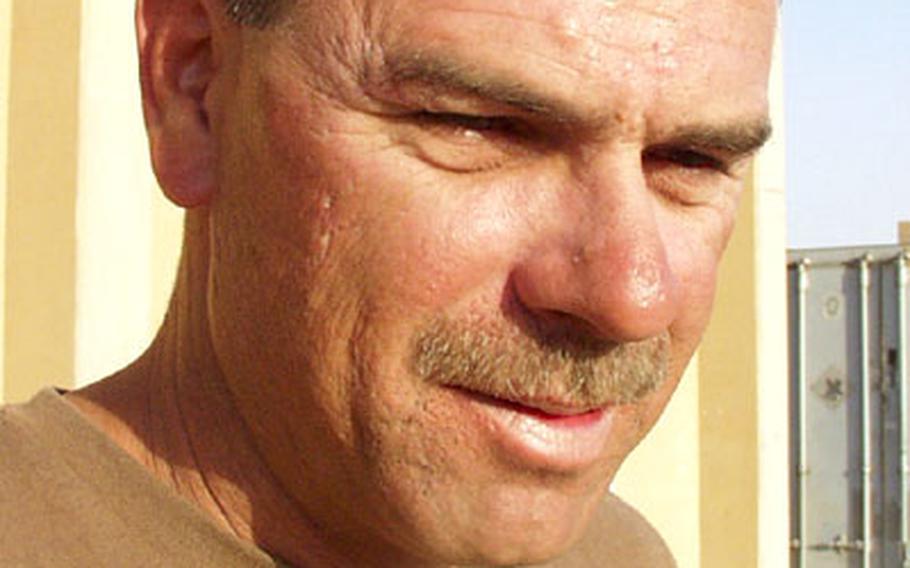 AL-ASAD, Iraq &#8212; In the faces of the boys at the chow hall, Teresa Dougherty sees her own son.

There are a lot of moms in the Naval Mobile Construction Battalion FOURTEEN. Dads and grandparents, too. The average age of these Seabees is 41. When they were called to war, they left a lot behind.

Dougherty, a single mom and fifth-grade teacher from Jacksonville, Fla., worries that her teenagers are staying up too late. She&#8217;s 45. Jacqueline Icard of Marathon Key, Fla., has children older than many of the troops fighting here. She will turn 51 later this month.

Almost all of the NMCB-14 are reservists. They have houses and jobs and families and lives that they left back home.

About 70 Seabees are stationed at al-Asad, a former Iraqi air base. Most of the rest of the battalion is stationed to the east at al-Ramadi.

Their mission is to build things for the Marines and projects for the Iraqi people as needed.

He&#8217;s in charge of moving people and pallets to where they belong. Some of the packages are small, such as care packages from home. Others are large, such as buckets for excavators. Coordinating flights is hard because the schedules are so secretive.

&#8220;A lot of us do this on the outside already; we already know construction,&#8221; said Chief Petty Officer Michael Proctor, 40, of Pelion, S.C., whose job back home is to oversee buildings and maintenance at a local college.

Being older has its advantages. Older people rely less on manuals and more on smarts, according to Petty Officer 1st Class Danny Stapleton, 54, and grandfather of five from Tampa, Fla.

The old Seabees don&#8217;t jump out of the back of trucks and kick down doors. Instead, Petty Officer 3rd Class Steve Christian grinds brackets in the 100-degree sun.

The brackets and bolts he grinds aren&#8217;t just any parts. They will be used to attach armor to Humvees, and maybe they&#8217;ll save a life.

The old Seabees don&#8217;t know everything.

When they began arriving in March, they didn&#8217;t know much about convoys in Iraq and improvised explosive devices and people who wanted to kill them.

&#8220;These people still get on the vehicles and brave it out there knowing the dangers. I respect every one of them.&#8221;

Five more sailors were killed during a May 2 mortar attack, bringing the total number of Seabees killed during their 2&#189; months in Iraq to seven.

Photos of the deceased are displayed proudly and sadly at the al-Asad headquarters.

Young troops, she said, worry about things such as whether they should re-enlist. Davis tells them they should if they don&#8217;t have a better plan.

Lt. j.g. Christopher Lynch, 40, a married father of four young children, has the job of running the al-Asad detachment.

The oldest Seabee in Iraq might be 57-year-old Beryl Millard, a master chief who looks a little like Clint Eastwood. Millard operates a 40-ton crane back home in Tampa. Here, he operates smaller heavy equipment. Child&#8217;s play.