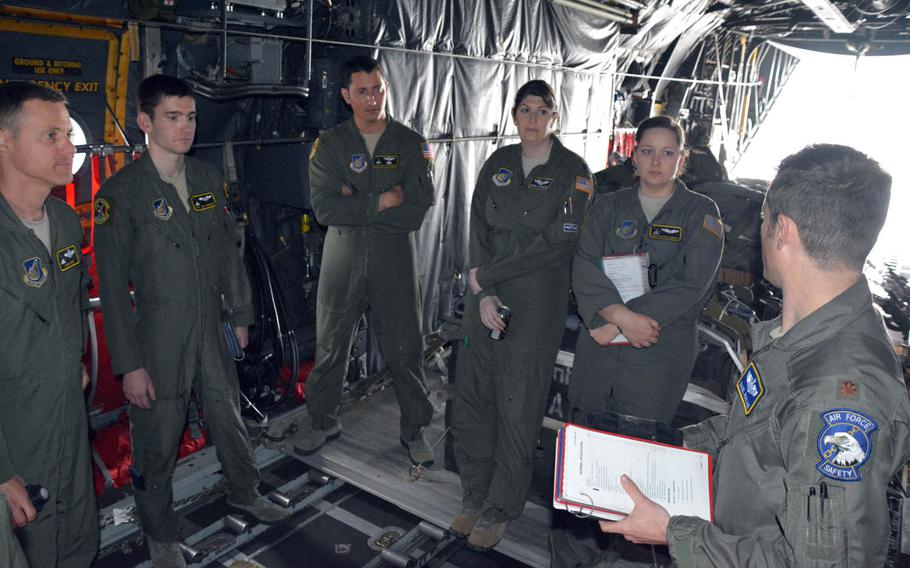 Buy Photo
The crew of a C-130H cargo aircraft prepares for an airdrop mission out of Yokota Air Base, Japan, Thursday, April 20, 2017. (Seth Robson/Stars and Stripes) 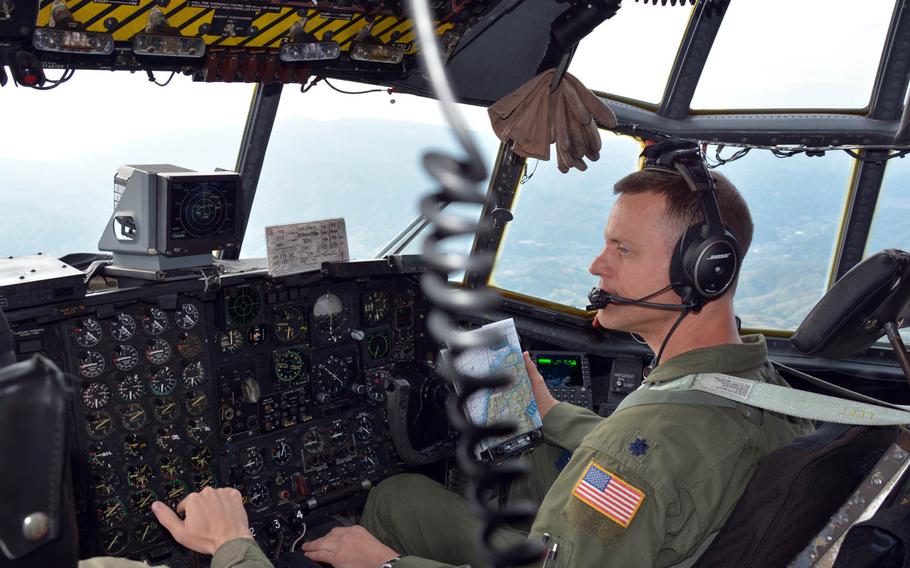 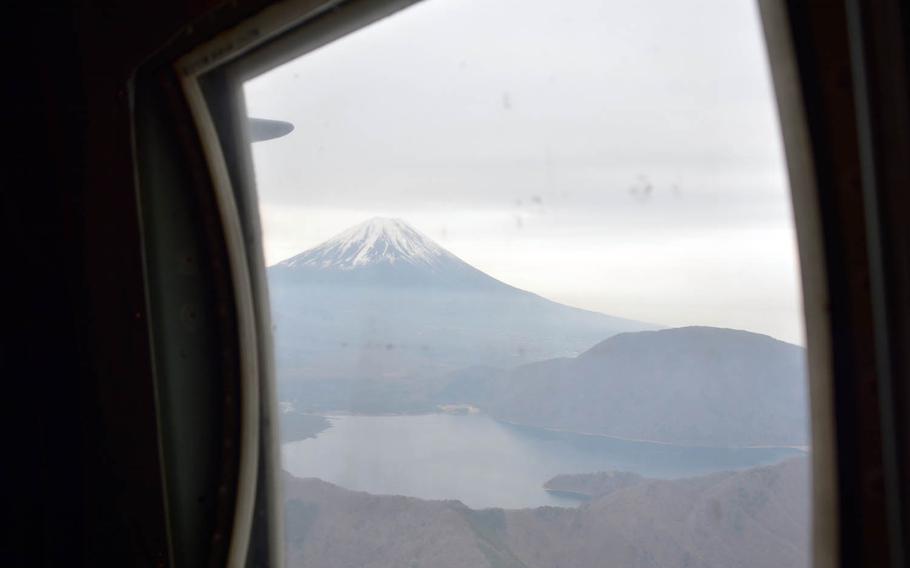 Buy Photo
Mount Fuji is seen from the rear window of a C-130H Hercules, Thursday, April 20, 2017. (Seth Robson/Stars and Stripes) 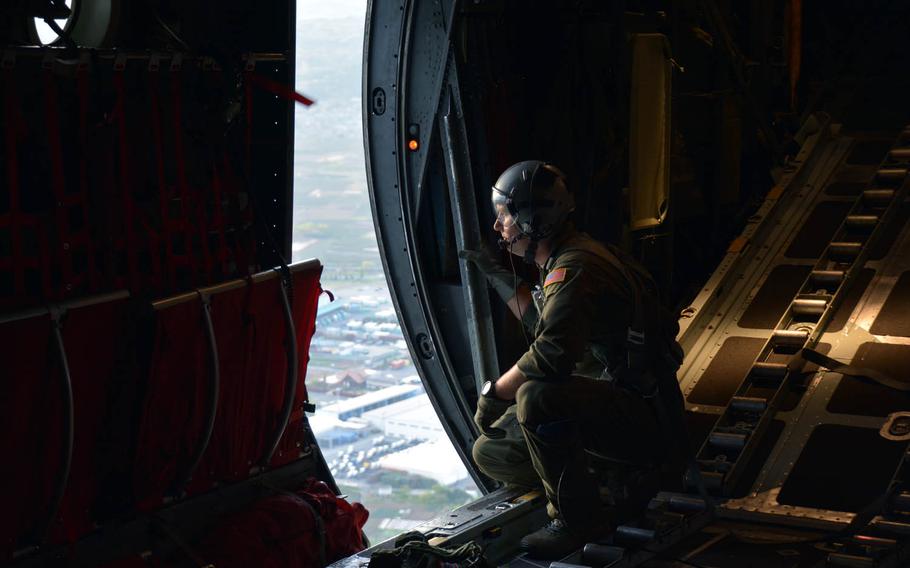 YOKOTA AIR BASE, Japan — The 36th Airlift Squadron’s old C-130H Hercules cargo planes seem to know their time in Japan is coming to an end.

The more than 40-year-old aircraft began acting up when a pair of sleek, new C-130J Super Hercules visited Yokota last year and flew laps above the western Tokyo air base.

“The H-models started constantly breaking,” loadmaster Senior Airman Tony Schoof said before a recent airdrop mission near Mount Fuji. “It was like the Hs knew that the Js were coming and didn’t want to work for us anymore.”

Yokota got its first Super Herc last month and will have 14 by year’s end. The old planes will be sent to Air National Guard units in the states.

Each Super Herc needs two fewer crewmembers thanks to automated navigation and engineering systems, and its Rolls-Royce engines provide more power, fuel efficiency and range. Still, the old aircraft holds a special place in the hearts of those who have crewed it.

Schoof, 25, of Yale, Mich., recently boarded a Herc known only by its tail number — 74-1659 — for one of its last missions in Japan before flying to its new home at Mansfield Lahm Air National Guard Base, Ohio, in May.

A maintainer kissed the nose of the aircraft for good luck, and the Vietnam War-era plane’s engines powered it west over the mountains beyond Tokyo.

Herc crews aren’t assigned to individual aircraft. They fly whatever plane is ready. Most Hercs are known simply by a tail number, but each has its own character.

The only Yokota Herc with a name is called “Damian” because its serial number ends with 666. That doesn’t mean the aircraft is evil, though.

“You have got to trust her and love her,” Schoof said of Damian. “She will always get the mission done for you.”

Each of the planes is slightly different and crews get to know their personalities, said Capt. Sarah Affalter, 32, a Yokota-based C-130H navigator from Lawrence, Kan.

“They’re old planes, so you know if I’m on this tail, this gauge always acts funny,” she said.

The old Herc she and Schoof were on passed Mount Fuji and banked north around Japan’s rugged east coast. Crewmembers went about their duties in the cockpit and cargo hold filled with switches, cables and things that need to be adjusted on the go.

Mechanical controls on the old planes are replaced by computers and digital systems on the Super Hercs.

“It is more hands-on” on the H-model, Schoof said.

From Fuji to Fiji Herc 74-1659, launched in 1974, has been all over the Pacific during a decade at Yokota, participating in almost 1,500 sorties and drills in places like Alaska and Guam, dropping supplies to Micronesian islanders and bringing personnel, equipment and aid to Nepal after the 2015 earthquake.

Schoof has been on many of those missions and rated Operation Christmas Drop, an annual drill where the Hercs parachute aid to isolated Pacific islands, the coolest thing he’s done during two years in Japan.

“It’s real-world, humanitarian and something we train for all the time,” he said.

Flying in the Philippines during last year’s Balikatan exercise was another highlight that included a stop at Clark Air Base, which was America’s largest overseas facility before U.S. forces withdrew in 1991.

“You’re going to an abandoned base. It’s kind of cool seeing all the old buildings,” he said.

Mount Fuji filled the cockpit windows as the plane approached a rural drop zone, where the crew planned to launch a weighted pallet on a parachute from the rear ramp.

The route was preplanned, but Affalter checked altitude, airspeed, wind strength and direction to make sure the drop was as accurate as possible.

“If we are off what we had planned, it’s my job to recalibrate in flight,” she said. “Sometimes we are a minute out from the release point and I’m making minor adjustments as we go.”

Affalter expects to be the final navigator to leave Yokota when the last H-model leaves the base later this year. She isn’t sure where she’ll end up.

Herc’s crew community The active-duty Herc community is a small one with planes based in Little Rock, Ark.; Dyess, Texas; Ramstein, Germany; and Yokota, which has the last H-models in the active-duty fleet.

Airmen from other units sometimes recognize Hercs they flew on more than a decade ago when they stop over at their bases, Schoof said.

A Yokota crew recently delivered a special plane to an Air National Guard unit in Ohio. Senior Airman Jeremy Jutba-Hake died of a heart attack after flying on the aircraft during Operation Christmas Drop in 2015, said Schoof, who wears a patch with the late airman’s name on it.

“Jutba went to high school in Ohio, and we got to take his plane there, and it is going to continue the mission,” he said.

The airdrop near Fuji was the last time Tech Sgt. Dusty Surber, 35, will serve as a flight engineer on a Herc.

The Townsend, Tenn., native, whose job is done by computer on the new plane, is heading to McGuire Air Force Base, N.J., to fly on KC-10 refuelers.

He calculates aircraft performance based on payload and atmospheric conditions. In Nepal, for example, altitude limited performance, said Surber, who also participated in an earthquake-relief mission last year in Kyushu, Japan.

The Herc was flying low and straight when it reached the drop zone. It took microseconds for a brown chute to drag the cargo out of the plane and start floating toward the ground.

That airdrop mission was closer to home than some of the places Surber has flown on the Herc. He’s been to Thailand, Indonesia, Guam, Bangladesh, Australia, Hawaii, the Philippines, Wake Island and Alaska.

The lack of automation on the planes means that the crew relies on one another to stay safe, he said.

“We have issues from time to time, but there are four engines,” he said of the C-130H. “It’s old technology, but it’s good technology.”