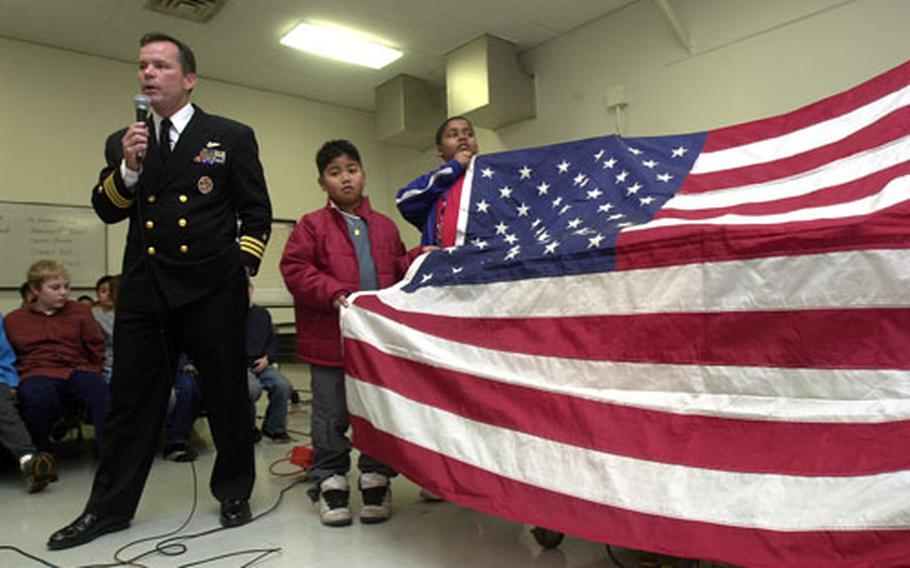 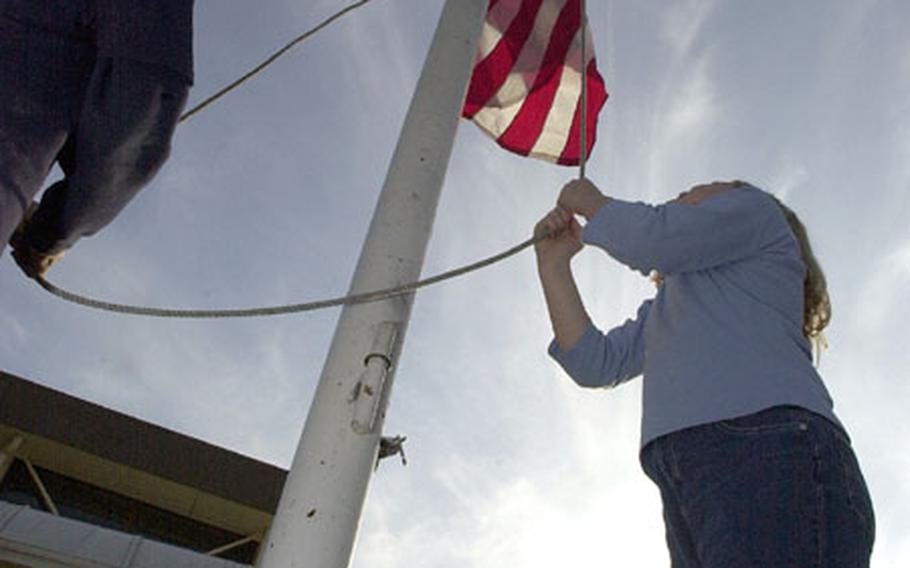 Cmdr. Seamus Flatley, commanding officer of Fighter Squadron 154 based here, brought the flag to the school Friday to talk about its history and symbolic importance to the nation.

The flag, called Old Glory, has been passed from person to person to reach a goal of traveling to hundreds of places worldwide where the Stars and Stripes have flown in both war and peacetime.

He took the handoff for the flag from the Dallas Cowboy cheerleaders after their recent appearance on base. He will take the flag to Iwo Jima this week to raise it there. It then will be handed to someone else to take to other destinations.

Flatley said he got involved in the project as a favor to the man coordinating the effort in the United States, Dave Pawlewicz.

About 200 students from the fourth and fifth grades filled the school&#8217;s cafeteria to hear about Old Glory. School spokeswoman Laurie Clark said the two grades were selected because they&#8217;re both studying facets of American history.

The regulation 5-feet-by-8-feet, 50-star American flag has traveled tens of thousands of miles since June 13, 1999. Old Glory has been to many places, including Khandahar, the American cemetery in Normandy, France, and aboard the namesake for one of the flag&#8217;s most famous moments: the Sasebo-based amphibious ship USS Fort McHenry, named after the fort that inspired &#8220;The Star-Spangled Banner.&#8221;

Old Glory took part in the one-year service for the victims of Flight 93 in Shanksville, Pa.; was carried in the 2001 presidential inaugural parade in Washington, D.C.; and flew over the USS Arizona memorial at Pearl Harbor.

Flatley said he hopes the students who saw the flag that day &#8220;gain an understanding of what the flag represents, the respect for the flag, and maybe learn a bit about the people that gave their lives for over 225 years this flag has been around.&#8221;

After discussing the flag and its history, Flatley asked for questions &#8212; and got more than he bargained for. While some asked about the flag, others focused on America&#8217;s current stance on Iraq and the war on terrorism.

He explained that sometimes, when people don&#8217;t agree, they resort to violence to try getting their way.

Another student asked why Iraqi President Saddam Hussein was a threat to the United States. Flatley said the U.S. military was standing by &#8220;to make sure rest of the world is safe&#8221; from any possible weapons of mass destruction in Iraq.

After the presentation, both grades filed outside to have their photo taken with the flag. Photos of people with the flag travel along in an accompanying folder and also eventually will make their way to a museum for the flag after its travels next year.