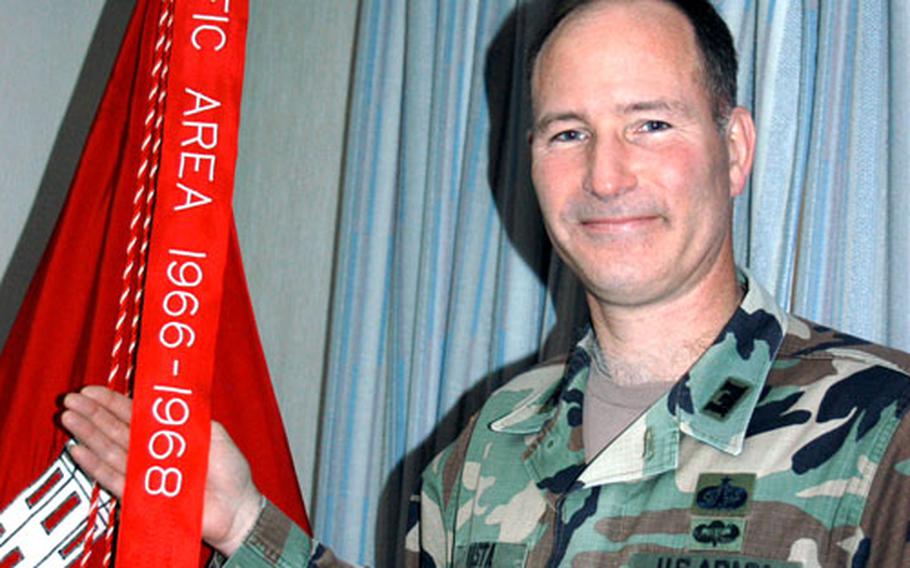 One in particular caught his eye: a Meritorious Unit Commendation earned by his command&#8217;s predecessor 36 years ago.

Almost four decades of change, including a war, two Corps of Engineers restructurings and the reversion of Okinawa to Japan, meant the command&#8217;s honor almost had been forgotten.

But if the commendation had followed his new command&#8217;s lineage, it would mean Vasta&#8217;s unit was entitled to display a special streamer on its unit colors during command functions and active-duty members of the unit could wear a citation ribbon on their dress uniforms, Vasta said.

His inquisitiveness paid off. After querying the Army, he learned the citation did indeed belong to the current command.

&#8220;It was just kind of lost in the shuffle,&#8221; said Lt. Col. Tyrone Allen, deputy commander and the Okinawa officer in charge.

The streamer, Vasta explained, is a physical representation of the Corps&#8217; work in the prelude to Vietnam.

They included designing and constructing facilities for B-52 bombers and Military Airlift Command aircraft at Kadena Air Base and for KC-135 tankers at Ching Chuan Air Base in Taiwan.

More than 40 projects needed to be completed at Kadena alone.

Vasta said the fact that the commendation was issued when the unit was balancing war with everyday responsibilities has a strong parallel to today, since many members of the current unit deploy to Iraq and Afghanistan.

For the unit&#8217;s 296 current members, many of them civilians, the citation is a reminder of how the Corps serves the military&#8217;s needs.