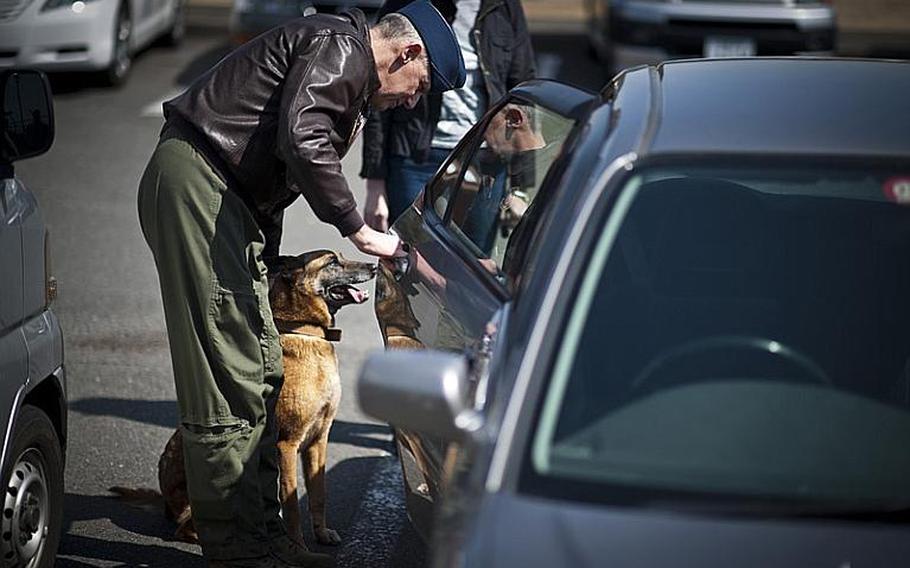 Col. Otto Feather, 374th Airlift Wing commander, puts Elra into the back seat of his car following her retirement ceremony as a military working dog on March 23, 2012, at Yokota Air Base, Japan. Elra, who entered the military working dog program on June 24, 2003, was adopted by Feather and his wife, Nancy, so they could retire together in Alaska. (Samuel Morse/U.S. Air Force)

Col. Otto Feather, 374th Airlift Wing commander, puts Elra into the back seat of his car following her retirement ceremony as a military working dog on March 23, 2012, at Yokota Air Base, Japan. Elra, who entered the military working dog program on June 24, 2003, was adopted by Feather and his wife, Nancy, so they could retire together in Alaska. (Samuel Morse/U.S. Air Force) 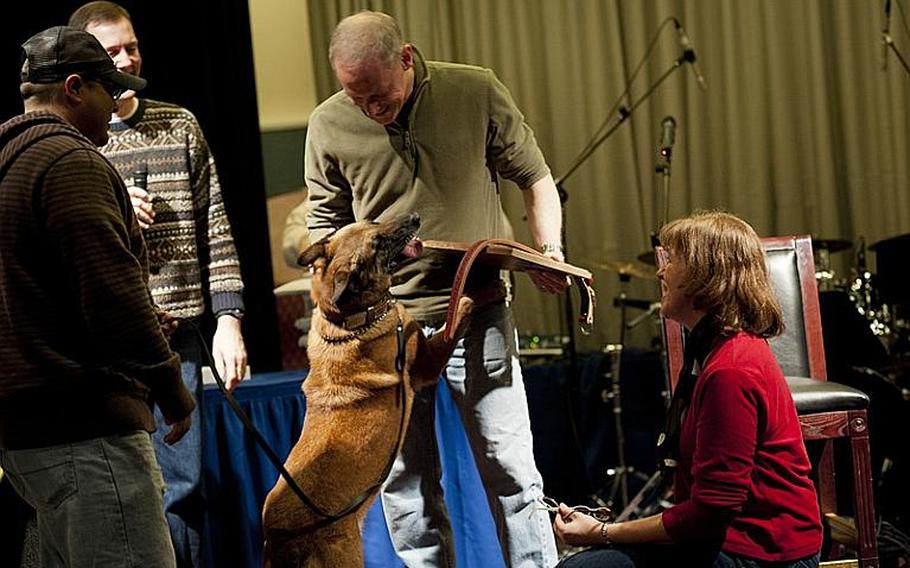 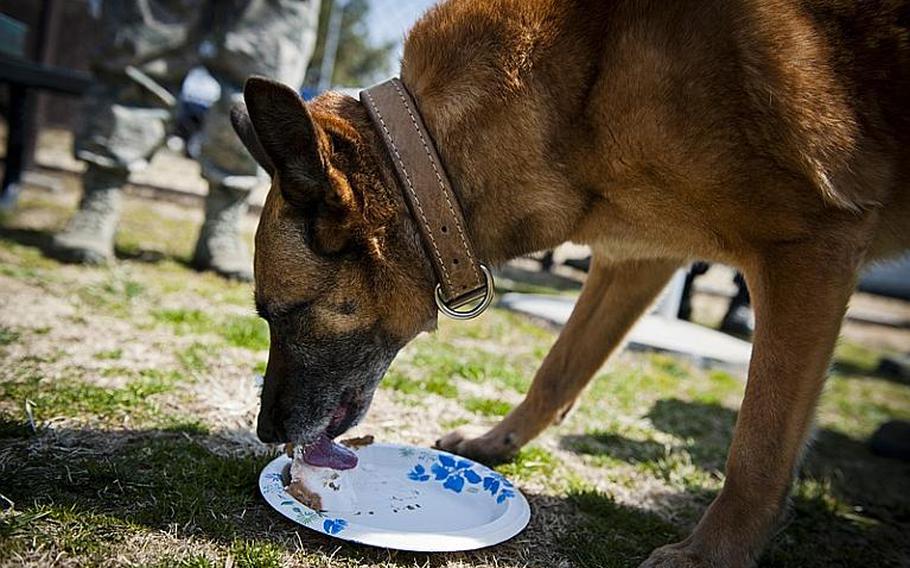 Elra eats a piece of cake following her retirement ceremony as a military working dog on March 23, 2012, at Yokota Air Base, Japan. Elra, who was named the Pacific Air Forces best military working dog for 2006, was adopted by the 374th Airlift Wing commander, Col. Otto Feather, who is retiring this year. (Samuel Morse/U.S. Air Force)

&ldquo;She just seemed like an old pal from way back,&rdquo; said Feather, who met the dog during a K-9 demonstration at Yokota in October. &ldquo;We just hit it off.&rdquo;

Like every working dog retired by the military, Elra was classified as &ldquo;excess equipment&rdquo; before she was adopted.

Many military working dogs require extensive veterinary care and pricey medication for ailments and injuries sustained on the job guarding troops, sniffing out bombs and detecting narcotics. While Feather and other retirees receive lifelong health care for their military service, their canine counterparts do not.

&ldquo;She&rsquo;s got a lot more miles on her than other dogs her age,&rdquo; said Feather, who adopted Elra knowing she suffers from severe arthritis and requires four medications a day.

Working dogs have been a respected part of the U.S. military since World War I. They got a boost in popularity after the raid on Osama bin Laden&rsquo;s Pakistan compound last year when details emerged about the dog that was on the ground with members of the SEAL team that took down the world&rsquo;s most wanted terrorist.

The Canine Members of the Armed Forces Act would direct the Secretary of Defense to award a contract to a private nonprofit group to establish a system of veterinary care funded through private donations. It would also make working dogs eligible for military commendations and eliminate the &ldquo;excess equipment&rdquo; designation &mdash; a formality that tends to offend animal advocates and many who have worked with military dogs.

Feather supports the bill, though he said he&rsquo;s more concerned with the principle than the money he and his wife will spend to care for Elra.

&ldquo;We&rsquo;ll cover it, whatever the cost. She&rsquo;s been a member of the military for a long time and served faithfully, it&rsquo;s the least she deserves,&rdquo; said Feather, who is bound for Alaska. &ldquo;We are going to be very happy to give her the best life we can.&rdquo;

Additionally, the proposed legislation calls on the military to improve what some have criticized as a lengthy and cumbersome adoption process for military working dogs, and to help arrange flights back to the U.S. for canines who are retired overseas.

&ldquo;Uncle Sam got them there, Uncle Sam should get them home,&rdquo; said Debbie Kandoll, who has adopted three retired dogs and in 2008 founded Military Working Dog Adoptions, one of several nonprofits devoted to the cause.

&ldquo;Why can&rsquo;t they be shipped (for private adoption) on military transport?&rdquo; asked Kandoll.

The military occasionally pays to move dogs suitable for adoption to Lackland Air Force Base in San Antonio, which trains them and manages the program for all four services. But that route is usually taken only if adoption outside the U.S. proves impossible, which is rare, said spokesman Gerry Proctor.

Still, Kandoll said, sometimes the most suitable would-be owners &mdash; particularly former handlers who get priority on the waiting list &mdash; are in the States and cannot foot the bill to get the dog back home.

&ldquo;Each dog is like a pair of tailored clothes, it should fit the family perfectly,&rdquo; said Kandoll, adding that her organization recently paid for a former military dog handler to retrieve a retired dog from Germany.

Proctor said dogs and their prospective owners undergo extensive screening processes to ensure a good match, even overseas, where most dogs end up with troops or retirees like Feather.

The dogs are first offered to various U.S. law enforcement agencies before they are eligible for private adoption. Since 2000, it has been illegal for the military to euthanize any military working dog that has been deemed adoptable, no matter where it is located.

Of the 444 dogs that left the military in 2011, 52 were transferred to other government or law enforcement agencies and 276 were privately adopted, according to an Air Force report. The other 116 died while on active duty, with some dying of natural causes and others euthanized for debilitating illness or because they were too dangerous for adoption.

There are currently 2,700 military working dogs on active duty in the U.S. military.