Top 40 group MOG puts on a show for guests of Camp Foster&#39;s Oktoberfest Saturday. The band played a variety of music, ranging from rap to rock. (Fred Zimmerman / S&S)

Top 40 group MOG puts on a show for guests of Camp Foster&#39;s Oktoberfest Saturday. The band played a variety of music, ranging from rap to rock. (Fred Zimmerman / S&S) 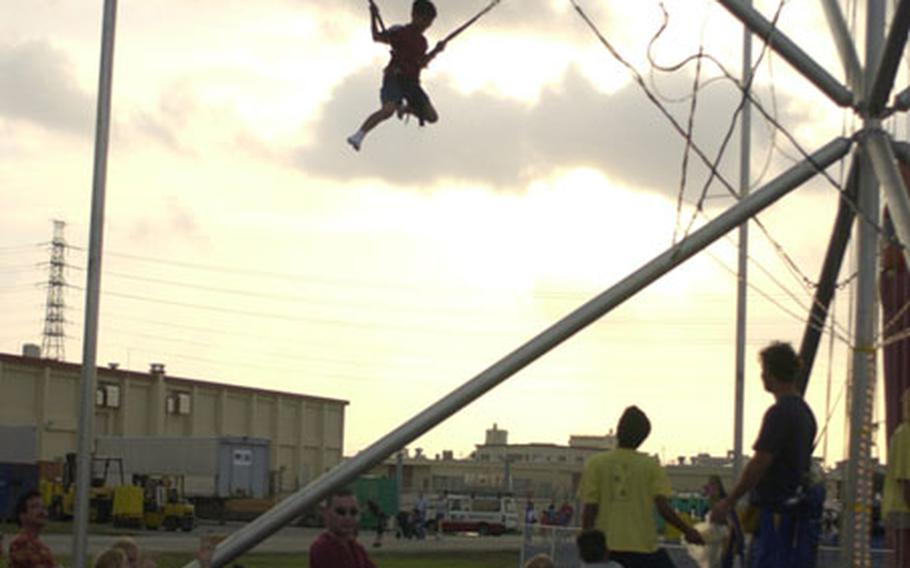 Several children soar into the air on "Airtime" at the Oktoberfest on Camp Foster Saturday. In addition to the bungee fun, there were slides and moon bounces to keep the younger crowd occupied. (Fred Zimmerman / S&S) The "Sauerkrauts" Oompa band kicked off the live entertainment Saturday at the Oktoberfest on Camp Foster. (Fred Zimmerman / S&S)

Despite overcast skies and a few sprinkles, thousands of servicemembers and their families joined local Okinawans for the food, fun and entertainment.

For the smaller guests, a &#8220;Kiddie Land&#8221; was available, featuring large inflatable slides and a moon bounce. There was also the &#8220;Airtime&#8221; ride, in which kids strapped into a harness attached to bungee cords rocketed themselves high into the air by bouncing on a trampoline.

Carnival games were also plentiful. For a few dollars, children popped balloons or knocked over milk bottles for a prize.

But it wouldn&#8217;t be Oktoberfest without plenty of food and beer. Guests filled themselves with everything from local Okinawan fare to pizza, bratwurst, sauerkraut and funnel cakes.

The event&#8217;s festive atmosphere was enhanced by some live entertainment.

In true German style, Oktoberfest kicked off Saturday with the Sauerkrauts, an oompah band. Next up was the Top 40 band MOG and country artist Kelly Rae. The evening ended with the headliner, rockers Joan Jett and the Blackhearts.

The Sauerkrauts got things started again on Sunday and were followed by Rae and MOG. Adult contemporary artist Maria Howell, then R&B artist Cherokee wrapped up the live entertainment.

It was Camp Foster&#8217;s first Oktoberfest.