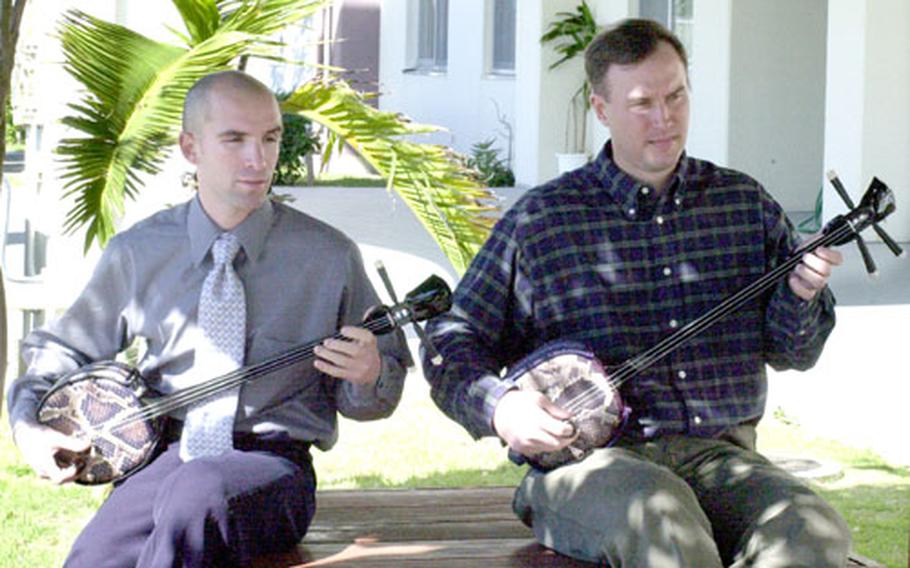 TORII STATION, Okinawa &#8212; The last time Jonathan Beyer and Jay Schwarzmann had ever played a musical instrument was in middle school, when they both played horns.

Neither imagined that decades later, they would be rocking out in kimonos.

About 18 months ago, the two Department of Defense Dependents Schools Pacific employees thought it would be fun to try out the Okinawan sanshin, a locally revered three-string instrument smaller than a guitar.

Since then, they&#8217;ve shocked and delighted many Okinawans, who never expected to hear Americans picking away while singing Ryukyan songs.

Their recent appearance on stage at Chatan Town&#8217;s Nirai Center was the crowning moment in a learning process that began in broken Japanese at the community center&#8217;s front desk.

After the men expressed their interest, the receptionist pointed them to Hirokatsu Matsuda, a sanshin player for the past 50 years.

They took lessons at home, one day a week for six months, before joining the community center class.

Besides playing in concert, Beyer sometimes walks over to the Sunabe seawall and starts playing. He&#8217;s used to jaws dropping when Okinawans see him playing sanshin.

Beyer, who has lived on the island for more than two years, says he plays because the sanshin is so symbolic of Okinawa.

Schwarzmann, an eight-year resident, said playing sanshin was a way to bring him closer to Okinawan people.

Although both guitars and sanshins are stringed instruments, there are few similarities for Westerners. There are three scales, none of which conform to the seven-note diatonic scale taught in Western music.

There is no written meter, the amount of time to play each note at a certain tempo. Musicians learn the meter after hearing the song played.

Most of the songs are composed in Uchina Guchi, the native Ryukyan language, and not Japanese. However, the songs are written in rows of Japanese characters signifying notes. With help from classmates, Beyer and Schwarzmann must then translate the two languages into English to understand the music.

There are three types of sanshin musical styles: Koten, a classical form with rigid rules; Minyo, a relaxed folk style; and Eisa, which is played with taiko drums at large festivals.

Beyer and Schwarzmann play a lot of Minyo-style music for its flexibility.

Although they both downplay their ability, they admit Okinawans get very excited when they hear songs they never thought they would hear from foreigners.

&#8220;It completely recasts their thinking about what Americans are,&#8221; Beyer said.