Okinawans shaken by news Marine veteran may have killed woman 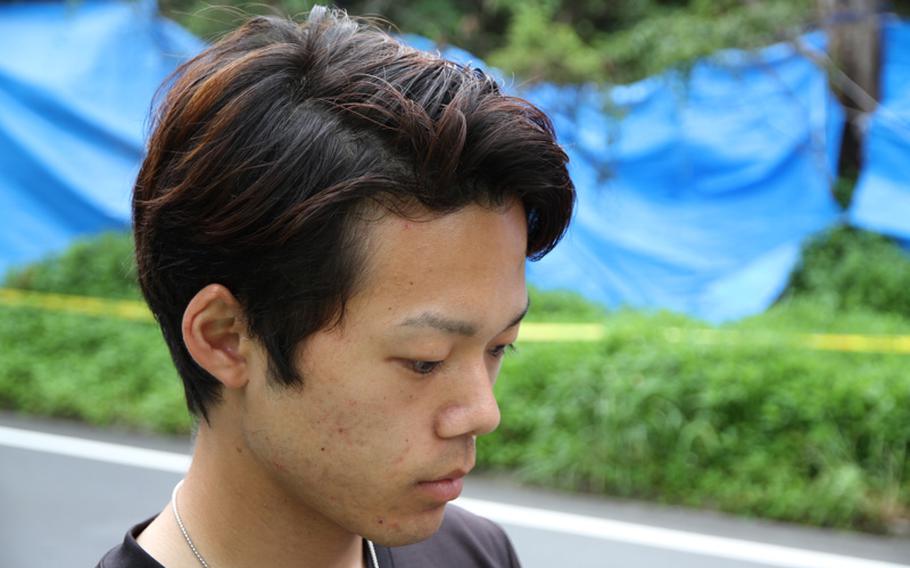 Kakeru Miyagi, 20, of Nago prays for the soul of his former classmate Rina Shimabukuro at the site in Onna Village's Afuso district where police found her body Thursday. A former U.S. Marine has admitted to killing the 20-year-old office worker. ()

Kakeru Miyagi, 20, of Nago prays for the soul of his former classmate Rina Shimabukuro at the site in Onna Village's Afuso district where police found her body Thursday. A former U.S. Marine has admitted to killing the 20-year-old office worker. () 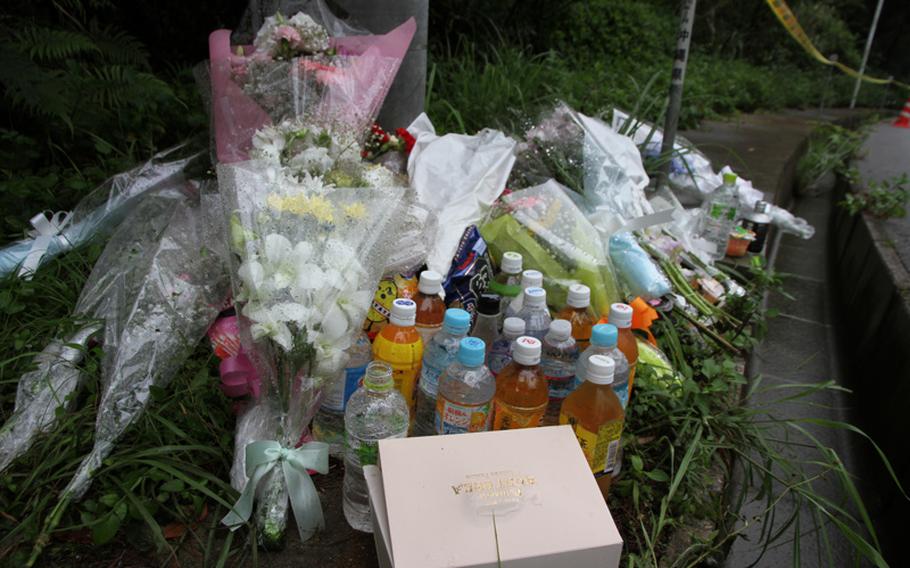 Police tape and a blue tarp mark the site in Onna Village's Afuso district where the body of Rina Shimabukuro was found Thursday. A former U.S. Marine has admitted to killing the 20-year-old office worker. () Police tape and a blue tarp mark the site in Onna Village's Afuso district where the body of Rina Shimabukuro was found Thursday. A former U.S. Marine has admitted to killing the 20-year-old office worker. ()

CAMP FOSTER, Okinawa — In between bouts of driving rain, people descended upon a makeshift shrine Saturday that had sprung up by the wooded location where an Okinawa woman’s body had been found days earlier.

Kakeru Miyagi, 20, of Nago, said he had known the beautiful and lithe Rina Shimabukuro since they were classmates in middle school. Now, as he surveyed the yellow police tape and blue tarp blocking the scene in Onna Village’s Afuso district, he prayed for her soul.

Nearby, bouquets of flowers were piled high amid a collection of tea and sweets that the slain office worker from Uruma enjoyed.

An American civilian working on the island is being held by police in connection with the woman’s death. A former Marine, Kenneth Franklin Gadson — who goes by his Japanese wife’s name of Shinzato — has admitted to police to killing her and dumping her body, his attorney told Stars and Stripes.

Miyagi recalled his former classmate as “friendly” and “good-natured.” Shimabukuro was quiet in class so Miyagi was surprised to find she was a talented singer and dancer, he said.

“When we were in the ninth grade, we went to Mount Aso on a school trip,” he said as he gazed down the isolated stretch of jungle-smothered street. “She danced and sang a song by AKB 48 (a popular Japanese idol girl group) with the other girls. It was the first time I discovered that she had that talent, because in class, she would never show off that sort of thing.”

Miyagi said that when he heard Shimabukuro had gone missing, he had hoped she would be found alive and well.

He said he was too in shock by the brutal nature of the crime to direct any anger towards her alleged killer.

“It’s just unthinkable that anyone could do such a horrible thing,” Miyagi said. “I understand (Shinzato) has a wife and a newborn baby. It’s the time when your wife needs your help and support most. How could this ever have happened?”

The incident has shaken the island community and could strain U.S.-Japan relations. The Japanese protest the U.S. military presence on the island each time an American is charged with a serious crime, including a suspected rape which took place earlier this year. In light of this week’s news of the alleged crime, a protest is planned for 2 p.m. Sunday.

Shinzato, 32, was arrested at the remote site that lies in between U.S. military landing zones and ranges on Thursday after leading police to the spot where he dumped 20-year-old Shimabukuro’s body.

Police have referred charges to the prosecutor’s office to indict Shinzato for the illegal disposal of a body. His attorney, Toshimitsu Takaesu, told Stars and Stripes Friday that his client also had confessed to strangling Shimabukuro, so more charges are expected.

Takaesu said his client may have been under the influence of sleeping pills at the time of the confession..

The Asahi Shimbun, a Japanese newspaper, reported Saturday that Shinzato has admitted to raping, stabbing and strangling﻿ the woman. Takaesu declined to confirm those details.

Shimabukuro had been missing since around 8 p.m. on April 28 when she told her boyfriend she was going for a walk. Several hours later, Shimabukuro reportedly read a message on her cellphone but did not respond.

Her boyfriend reported her missing the next morning.

Police feared she had been the victim of a crime or an accident because she left behind her car and wallet. Her phone GPS tracked her last known location to an industrial area near her home in Uruma’s Suzaki district.

Shinzato was brought in for questioning after his red sport utility vehicle was among about 300 vehicles captured in security-camera footage from the area during that time period of the woman’s disappearance, police said.

Asahi reported that investigators believe he struck her with some sort of stick and dragged her into his vehicle. The newspaper reported that he allegedly transported her in a suitcase to the site where she was dumped.

Japan television station NHK reported that investigators found a picture of the victim’s phone, open to her Facebook page, on Shinzato’s phone, and that blood had been found in the suspect’s car.

Everything was quiet Saturday at Shinzato’s house, which he shares with his wife, newborn baby and in-laws. No one answered the doorbell for Stars and Stripes reporters seeking comment shortly before the house was searched by police. A sleek, fast-model motorcycle stood in the rain in the front yard.

Takaesu tried to paint his client as a victim on Saturday, perhaps offering an early window into Shinzato’s defense.

“[Shinzato] grew up in an orphanage in New York and his mother is in an alcoholic rehabilitation facility,” Takaesu said. “He does not know who his father is.”

Shinzato’s next-door neighbor, Shiho Kinjo, 23, said she was surprised to hear the news about her new neighbor who moved to the location a month before.

“I’ve only seen him once and I said, ‘Hello,’ to him in English and he said, ‘Hello,’ in reply and that’s all,” she said. “He seemed like a nice person. His wife is kind and very good looking.”

Sunday’s demonstration, organized by Okinawa Women Against Military Violence and other women’s groups, is planned to take place in front of the Marine Corps headquarters building on Camp Foster, according to Keiko Itokazu, a representative for the group and member of the House of Councilors.

The group will be demanding the removal of all the military bases from Okinawa, she said.

“When I think of the victim, a 20-year-old, young woman, who had a promising life, I become speechless. I am filled with anger, sadness and rage,” she said. “Every time when an incident involving military member happens, military leaders pledge to tighten discipline and take preventive measures, but we now know that none of this has ever worked.”

Itokazu said that closing Marine Corps Air Station Futenma is not enough. The planned relocation of flight operations to Camp Schwab is now “impossible” as well.

She called on President Barack Obama who will be visiting Japan next week to come to Okinawa to offer apologies.

Nakatani demanded that an incident like this never happen again and called for thorough and effective discipline regarding the approximately 30,000 U.S. troops stationed on the island, it was reported.

“After all, what is needed is an effort by the military,” Nakatani said. “We asked the military to take workable and concrete measures.”

A larger, island-wide protest rally also is in the works, Itokazu said. The date, place and time have yet to be decided.