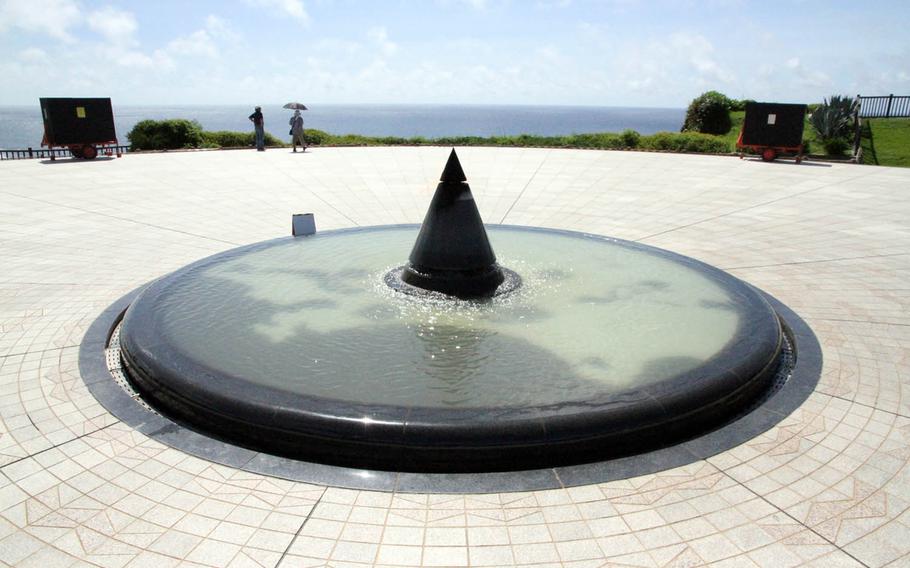 An eternal flame burns during the Irei no Hi ceremony at Okinawa Peace Memorial Park in Naha, Japan, Friday, June 23, 2017. This year's ceremony marked the 72nd anniversary of the Battle of Okinawa. (Matthew M. Burke/Stars and Stripes) 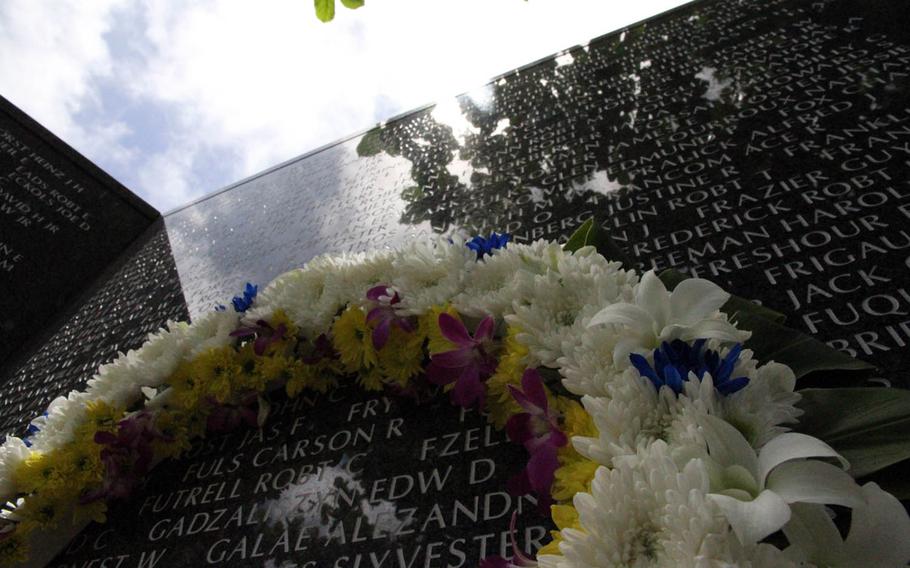 A wreath rests against the names of some of the thousands of Americans inscribed at Okinawa Peace Memorial Park in Naha, Friday, June 23, 2017. (Matthew M. Burke/Stars and Stripes)

NAHA, Okinawa — Sunao Oshiro’s eyes moistened as the 84-year-old made his yearly pilgrimage to the granite wall in Naha inscribed with the names of his family.

Oshiro was only 11 when the Battle of Okinawa came to his tiny home island of Ie Shima, which lies just off the coast of Okinawa’s main island. He was huddled in a cave with his parents and four younger brothers when a bomb landed on the island, killing his entire family and 48 village residents.

Oshiro said he felt a hand pull him out of the rubble. He was one of only three to survive.

“Why am I the only one who survived?” Oshiro asked about his family. “If it was God’s will, what sin had my young brothers committed to be killed? I have kept asking myself these questions.”

Oshiro visited Okinawa Peace Memorial Park on Friday for the annual Irei no Hi ceremony, which marked the 72nd anniversary of the Battle of Okinawa. The battle began April 1, 1945, and lasted for 82 days. It claimed more than 14,000 Americans who lost their lives during or after the fighting, about 110,000 Japanese troops and at least 140,000 Okinawan civilians, though the total number of civilian deaths may never be known.

The battle spelled utter devastation for the people of Okinawa, and its reverberations can still be felt in the island’s passionate anti-war movement.

However, for the allies, it was pivotal. With airfields close to the Japanese mainland in their possession, they could begin the final assault on the Japanese homeland that would end World War II, which began with the Japanese attack on Pearl Harbor 3½ years earlier.

The war ended several months after the Battle of Okinawa.

As those who remember the horrors get older, attendees stressed the importance of passing their experiences on to the next generation.

Setsuko Kurita, 74, visits the memorial each year, all the way from Nagoya on the mainland. This year, she was accompanied by her granddaughter, Kaho, 12, who lives on Okinawa.

Kurita recalled seeing off her uncle from an airport near Nagoya. He was a student of the Imperial Naval Air Corps. He died on Okinawa at 20, and his remains have not been recovered.

Kaho said she looked for her great-uncle’s name on the memorial because she often hears his story from her grandmother.

“I found it and I prayed for him,” she said.

The day began, as it does every year, with a small contingent of Marines, sailors, veterans and diplomats laying wreaths at the part of the monument dedicated to the battle’s American losses.

Lt. Gen. Lawrence Nicholson, III Marine Expeditionary Force commander, said attendees owe a debt to every name inscribed on the ever-stretching granite walls, which means maintaining a strong alliance with Japan and its people, especially those on Okinawa, and ensuring regional security and prosperity.

“This is hallowed ground,” Nicholson said. “We honor them by the way we live our lives every day. Their sacrifices can’t be in vain.”

George Cabrera of Veterans of Foreign Wars Post 9723 said he could “feel” the sacrifice made by those who fell in battle.

“This date is to remember and honor those who gave their lives to give us the freedom we enjoy today,” he said.

About 5,000 people then packed into a white tent to escape the unrelenting summer heat. Okinawa’s anti-base governor, Takeshi Onaga, used the platform to talk about last year’s killing of an Okinawan woman in which an American base worker was charged. His attention then turned to the controversial relocation of Marine Corps Air Station Futenma.

“I cannot tolerate the situation in which the central government forcefully carries out the project at Henoko, ignoring the voices of Okinawa against it,” Onaga said, drawing applause from about half the crowd. “I will work closely with the people of Okinawa to block the construction with an unwavering determination.”

Prime Minister Shinzo Abe told the crowd he was resolved not to let the disaster of war be repeated again.

“The present situation of a large presence of the military on Okinawa is not acceptable,” he said. “I am resolved to reduce the burden of Okinawa and provide a maximum support for promotion of Okinawa’s economic activities.”

When asked after the ceremony how to handle a lawsuit over Henoko that is expected to be filed by Onaga as early as next month, Abe said he would do his best to close Futenma at the earliest possible date and would follow a court-mediated settlement to proceed with the construction.

Most attendees, however, were not focused on politics. They were thinking about the horrors they had endured and the lives that were lost.

“Five or six Imperial soldiers suddenly appeared at our cave, surrounded my mother and shouted at gunpoint, ‘You must kill your children, or you all have to leave the cave,’” recalled Kinuko Ishihara during an interview with Stars and Stripes before the event. Ishihara was 7 years old during the battle.

“We left the cave, leaving what small amount of salt and water we had there by their demand,” she said. “My mother, who had burned her legs, could barely walk.” Her brother, Tadao, helped her mother, and Ishihara carried her 1-year-old sister, Fujiko, on her back and held hands with her 3-year-old sister, Tsugiko. “We wandered the sugarcane fields that had been burned by flamethrowers. Under the rains of naval gunfire, flamethrowers, motor shells and bombing from B-29 bombers, people were running about trying to escape. We really did not know where we were going. We merely followed people ahead of us, while pieces of human bodies kept flying over our heads.”

She recalled losing sight of her mother and brother.

“When I finally found my mother and brother trapped under rocks, their bodies were already cold with their intestines scattered around,” Ishihara said. “Horrified, I cried out and stepped back. The scene was etched into my mind, and the incurable wounds that deeply seated in my heart haunt me throughout my life.”

She then realized that Fujiko was dead, still strapped to her back. Tsugiko later died in her arms. Her father died fighting in the battle.

“I witnessed a gruesome hell on earth that is beyond description,” she said. “What we Okinawans have nurtured and longed for through the horrible war is the wish for lasting peace.”